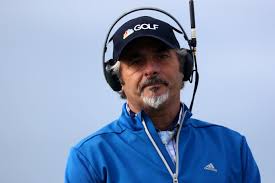 Addiction. Overdose. Relapse. All three form a large part of Golf Channel star David Feherty’s story. But they’re by no means all of it. Not even close.

The former PGA and European Tour golfer turned pro back in 1976 and spent most of his playing career in Europe, where he won five times and finished in the top ten twice in the European Tour’s Order of Merit. The Irish-born Feherty spent 1994 and 1995 playing mainly on the PGA Tour in the U.S.; his best result on the tour was a second-place finish at the 1994 New England Classic. Feherty then represented Ireland in international competition and captained the victorious 1990 Alfred Dunhill Cup team. He went on to play for Europe on the 1991 Ryder Cup team.

Upon retiring from the pro golf circuit, Feherty worked as a television personality. From 1997 through 2015, he served as a PGA Tour on-course reporter for CBS. In 2011, he introduced a self-titled interview series on the Golf Channel. Feherty subsequently joined NBC Sports full-time in 2016.

The Emmy-nominated host also happens to be a New York Times and Booksense best-selling author, as well as a Golf Digest columnist; plus he’s got a first look development deal with Universal Television.

Even with all that success however, Feherty still fell victim to the cycle of addiction, overdose and relapse.

David Feherty has been wide open about his depression and substance abuse since 2006. That was the year when the former pro told Golf Magazine he “used alcohol to mask [his] inner demons.” In 2015, he revealed even more about his battle with addiction, this time in Rolling Stone.

“A typical day was 30-40 Vicodin and two and a half bottles of whiskey… real whiskey. Whiskey with an ‘e,'” Feherty said. “There was cocaine, there was dope. When I think about it now I’m like, ‘Why am I alive?'”

Feherty also revealed going on a two-day bender after winning the Scottish Open in 1986, getting addicted to painkillers after an early-career injury, and the role Tom Watson and Jack Nicklaus played in his recovery.

Then, in 2017, after 10 years of sobriety, Feherty’s personal world all came crumbling down.

In a funeral service obituary, Feherty used the tragic occasion to highlight his son’s strengths, as well as his affliction. And to alert others about the horrors of addiction.

“Shey was our beautiful and charismatic son and brother. He was the eldest of the two biological children of Caroline DeWit Feherty and David Feherty. Rory arrived 4 years later. Shey, was step-son to Anita, half-brother to Erin and step-brother to Fred and Karl Schneider. His beautiful blue eyes could captivate a room, but they could not stare down the enemy that lurked in the shadows and prevent it from reaching out to grab him in his darkest time.”

“Shey fought hard to win his battles with drug addiction and mental illness, but in the end the monsters won. The worry we felt watching Shey’s struggle with his addiction has now been replaced by a feeling of loss so deep, knowing we will never see his smiling face or beautiful eyes again. But through our heartbreak we share Shey’s story in the hope that it will touch another person who may battle with addiction either for themselves or for a loved one. Please know there is no shame in asking for help. Our Shey is gone from us now, but you can help us keep his light shining and focused if you reach out to another who suffers.”

Two years later Feherty went on HBO’s Real Sports and told Bryant Gumbel how his son’s death affected him — and affects him still.

Feherty also admitted the loss caused him to relapse.

“I was at a friend’s ranch and I’d gone up there to be by myself. I thought, ‘You know what? I’ve been sober 10 years. I’m tired of it. You know, I’m tired of being sober. I wanna feel better.’ And I convinced myself that it would make me feel better,” Feherty said.

“So, there was a bottle of Irish whiskey there, which is, like, an angel cryin’ on my tongue. But oddly enough, it didn’t — tasted awful. But I made myself drink more. I thought, ‘Hey, I’ve got this under control. I don’t have to drink that much.’ You know, the next day I did the same thing, and I thought, ‘Well, I’ve got it under control.’ Before I knew it, it had me under control.”

Feherty’s continued courage in the wake of addiction, overdose and relapse gives hope to everyone affected by substance abuse, be it the addict themselves or their loved ones. It also serves as a reminder that addiction doesn’t discriminate. That the disease can impact anyone, regardless of their station. But also that sobriety is possible, if one is ready and willing to face the battle head on.

Healing Properties applauds David Feherty for his strength, as well as his courage. And we congratulate him on his success. May it — and he — serve to inspire others out there fighting the good fight. And may it — and he — remind everyone that the battle can be won.