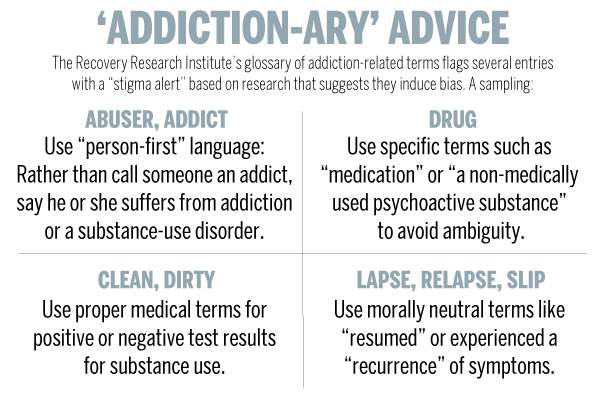 Addictionary: Eliminating the Stigma of Addiction — One Word at a Time

Can changing the words we use change the way we perceive addiction? Addictionary says Yes! In fact, it’s willing to recast language to prove it.

Indeed, RRI is run through Massachusetts General Hospital, which itself is an affiliate of Harvard Medical School. Its Director, Dr. John F. Kelly, also founded the institute. And he and his all-star team of addiction recovery experts are determined to change the very way the world perceives the field.

“Stigma is an attribute, behavior, or condition that is socially discrediting.” Epithets such as junkie and drunk come with obvious discredit. But so do words like addict and relapse. And those are two of the most used terms in recovery. Worse, even the recovery community itself often negatively employs them.

Why does this happen? Because of cognitive bias. Our inner brain doesn’t approve of addicts and relapses. Yes, often even when we’re the relapsing addicts. Consequently simply saying these words evokes negative stereotypes.

If such words evoke negative stereotypes even among those in recovery, then the only solution is to not use the words at all. Yes, that means employing euphemisms. But not to mask the problem, only to better address it.

Kelly and his team asked 200 people 35 different questions in order to gauge the inherent bias between a “substance abuser” and one who suffers from “substance use disorder.” Yes, you suspect correctly. The substance abuser fared far worse than the SUD sufferer. Largely because ‘the term “abuse” may convey the notion that the person has control (one of the two factors associated with stigma) and therefore is engaging in willful misconduct.’

Perhaps even more devastatingly is fully “half of participants worked in the healthcare field.” Nope. That;s not a typo. 50% of those polled came from inside healthcare. The rest either worked outside the industry (29%), were students (20%), or didn’t report working at all (5%). If this segment of the population has a depth perception problem, just imagine the degree of bias lurking among the public at large.

Kelly et al want to wipe out use of the word “abuse” altogether. They’re not the only ones either. In fact, the entire International Society of Addiction Journal Editors believes likewise. So do more and more recovery specialists. Funny how the only way to rid the world of abuse might be by ridding the world of the word abuse. A tad ironic too. But there you have it.

Or there we have it. The Addictionary recommends “use” as opposed to “abuse” (as in “substance use disorder” or “hazardous substance use”). Unfortunately, even that poses problems. If you employ “use,” then you’ve also got to employ “user.” And that puts us almost back to square one.

Nevertheless, Kelly and his team are correct. We do need a better recovery language. A slate of words rooted in positivity rather than stigma. A slate just like those contained in the Addictionary.

Healing Properties wholeheartedly applauds Dr. Kelly and the Recovery Research Institute for everything they do, and that includes of course their Addictionary. Too often people are defeated by stigma before they even have a chance at treatment. Changing the language will certainly help eliminate many a roadblock. It will also help people get on with their lives without regret. People in recovery are already saddled with guilt; pulling off the yoke of society’s disdain will definitely ease their burden. Yes, as RRI points out, “illicit drug use disorder is the most stigmatized health condition in the world.” And only a comprehensive rewrite will change that.

It’s heartening to see that happening, right before our very eyes. Incredibly heartening. There’s more to do, of course. Much more. And we’re ready and willing to help. In fact, we’ll be adjusting our language accordingly as well. And we’ll also be even more mindful of the words we use, in addition to how we use them. Why? Simple. We too want to end substance use disorder once and for all And we too know that begins with ending stigma.