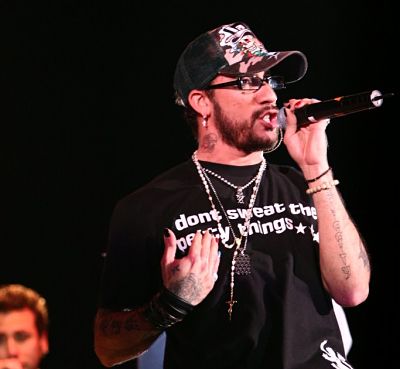 Anybody looking for another juicy tale of scandal and fail can stop reading right now. Why? Well, in the first place we don’t story like that. In the second, we’ve got better things to talk about. Things like AJ McLean celebrating one year of sobriety. Those kinds of things.

That’s right. The former Backstreet Boy picked up his gold coin this week. And we’re joining his hordes of supporters in issuing a resounding Congratulations!

Okay, so AJ McLean’s sobriety has been more dungeons and dragons than unicorns and rainbows. Maybe even a lot more. But that doesn’t diminish his accomplishment. If anything, it’s an enhancer. After all, few folks get back in the saddle once they’ve been thrown a time or two. Even fewer remount after they’ve been tossed to the ground more times than they can count.

But so what? Relapse happens. To everyone. It’s simply a part of sobriety. Sure, relapse happens to some more than others. But again, extra credit’s gotta go to those who remain unbowed despite repeated bloodyings. Besides, it’s not as if McLean was hurting anyone other than himself.

Okay, so McLean was hurting someone other than himself — his family. That includes wife Rochelle and daughters Ava, eight, and Lyric, three.

Fortunately, it made him feel “disgusting.”

In fact, McLean even took to his suitably-titled Pretty Messed Up podcast to share the whole story. And oh what a story did he share.

AJ McLean’s last relapse may not have been pretty, but it was pretty over the top. Par for the podcast, it was also pretty messed up. No, it wasn’t so much what he did. (Though of course there was that.) It was really more about how he did it. Then there was those who suffered as a result.

Like many relapses, McLean’s went down in Vegas. Though considering the pre-relapse planning, you could technically say it went down even before he landed in Sin City.

“I knew all of it and I figured, ‘Okay, it’s one night. As long as I don’t go past a certain time and I don’t smell like it, I can go have a nice last hurrah and then come back home. My wife won’t know; everything’s going to be great.'”

“It never, ever works out that way,” he continued. “I never slept. I missed my first two flights back home. And when I did get back home, I reeked of alcohol.”

The crowning moment came from a place McLean least expected — but most needed — it to come.

“But what really hit me that night was the moment my youngest daughter Lyric said to me, ‘You don’t smell like my daddy.'”

“When she said that to me, that was it” McLean ends, still obviously shaken by what he’d wrought. “I felt disgusting.”

And rightfully so too.

Healing Properties wishes AJ McLean A Very Happy ReBirthday. We realize it’s not his first First. But we do hope it’ll be his last First. At least for a good long while. We’d like to see the man get at least five or 10 years under his belt, so he can at least be there while his kids grow up. By then he’ll probably have no interest in drinking or drugging ever again.

We’d also like to applaud McLean’s pal René Elizondo Jr. for helping him battle addiction. From the sounds of things, the friend provided much-needed support throughout McLean’s struggle. And he did so without any judgement whatsoever. It also seems as if Elizondo’s continuing to provide strong sober support. And McLean’s lucky to have a solid friend like him.

Finally, we’d like to Thank Alcoholics Anonymous for yet again coming through. McLean’s obviously been working the Steps. Even if it’s via Zoom. And we’re happy to hear that living the AA Way agrees with him.

If you want what AJ McLean’s got then by all means, please give us a ring.