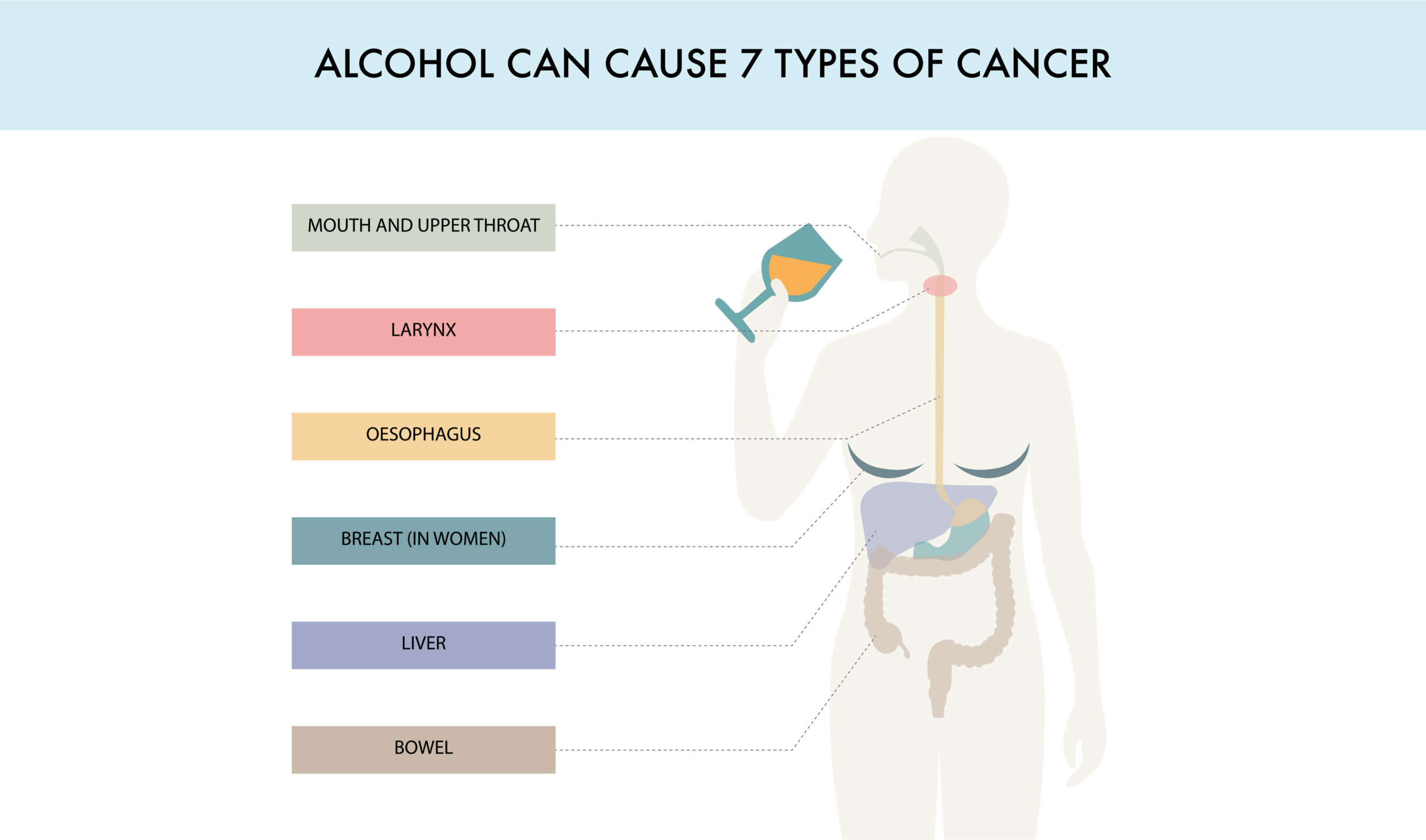 Alcohol Causes Cancer — No Question About It

Just in case you really needed another reason to quit drinking, word’s now coming out that alcohol causes cancer. Not may cause cancer or can cause cancer or could-cause-cancer-under-the-right-light-if-you’re-sitting-on-a-carcinogenic-pillow. No, alcohol does cause cancer. Period. And there are nearly 750,000 cases to prove it.

The number is actually 741,300. 568,700 (76.7%) of those cases were men; 172,600 (23.3%) were women. And they encompass all four corners of the world. So do the results, of course, which aligned with population density and drinking propensity. Consequently, cases were lowest in North Africa and West Asia (where there are less people), and highest in East Asia and Central and Eastern Europe (which are teaming with drunks).

Study co-author Harriet Rumgay of the World Health Organization’s 27-country International Agency for Research on Cancer said no matter what the type, it’s time the world started spreading the word.

“Alcohol’s impact on cancer is often unknown or overlooked,” she told Guardian Science Correspondent Nicola Davis, “so we need increased public awareness of the link between alcohol and cancer, and policies to decrease overall alcohol consumption to prevent the burden of cancers and other diseases attributable to alcohol.”

Apparently, moderation doesn’t matter to those pesky cancer cells. Not much anyway. Sure, lower consumption means lower risk, yet there’s still a risk. And, as they say, risk is risk. So when you’re risking something as severe as cancer, well, you’ve kinda gotta ask yourself, is it worth the risk?

You also might wanna ask if you’ve always been given the right information. The alcohol industry campaigns heavily on behalf of what it calls “responsible drinking,” which appears to be, well, quite responsible. But you can’t campaign away the links between alcohol and cancer. So the drinks folks also took it upon themselves to downplay those links. They apparently were rather crafty about it all too — and disingenuous. So much so that they were accused of “stressing the complexity of risk to suggest that there is little evidence of risk, when the opposite is true.”

“The alcohol industry appears to be engaged in the extensive misrepresentation of evidence about the alcohol-related risk of cancer,” claimed Professor Mark Petticrew, of the London School of Hygiene and Tropical Medicine. “These activities have parallels with those of the tobacco industry.”

Ouch. It’s one thing to be lumped in with boogeymen like Big Tobacco. It’s quite another when a team of esteemed academics is doing the lumping in. When that team is specifically tasked with analysing the accuracy of your information — look out!

The World Health Organization did indeed look out. So did the good folks at Public Health England. Then the two took it upon themselves to look into the research published in Drug and Alcohol Review. There they clearly saw that alcohol causes cancer, even at moderate levels. They also saw that the risk starts with low levels of drinking.

Got doubts? Guardian Health Policy Editor Denis Campbell took a rather invigorating dive into the dustup. Check it out. Kills doubts dead.

The above dustup went down back in 2017. The new findings however were released just last week. And again, those findings were unequivocal: alcohol causes cancer. Period.

Naturally, simply saying something doesn’t make it so. These researchers know that. These researchers also know they’ll have to stand behind their findings. So they began with due diligence and got more diligent from there. That they then published the study in The Lancet Oncology only further attests to its veritas.

And its thoroughness. The researchers “made their calculations using existing alcohol consumption estimates for 2010, based on figures including tax and sales data,” writes Davis, “as well as other data such as risk estimates for cancers known to be linked to alcohol.”

They did so with good reason too.

“There is a delay between alcohol consumption and possible cancer development, so it is necessary to factor in a latency period between the year of alcohol exposure data and the year of cancer diagnosis,” said Rumgay.

“The researchers [then] combined these figures with existing estimates of new cancer cases expected for 2020 – based on records from previous years and hence not affected by disruptions due to the Covid pandemic – to estimate the number of cases probably caused by drinking.”

Considering the estimated uptick in pandemic drinking, everyone’s probably very relieved that Covid couldn’t be factored into these equations.

People will also likely be relieved that Davis found folks who’ve got a way to counter these unnerving findings. Though to be fair to good people everywhere, they’ve probably already come to the same conclusion themselves.

“There’s no safe level of drinking,” said Cancer Research UK CEO Michelle Mitchell. “But whatever your drinking habits cutting down can reduce your risk of cancer. Minimum unit pricing for alcohol, introduced in Scotland and Wales and shortly in Northern Ireland, would be a positive step for England and we urge the government to introduce it here.”

Here here! In fact, we at Healing Properties urge governments to introduce such steps everywhere!

Healing Properties wholeheartedly thanks The Guardian for again providing such astute and comprehensive reporting. There’s good reason why we continually turn to the outlet — damn good reason. It’s because the outlet provides the kind of solid information and analysis necessary to make our way in the world. If, that is, we’re to make our way as informed citizenry anyway. In other words, The Guardian does much to keep us with it, in the best of all possible ways. Hopefully the outlet, in turn, enables us to help you stay with it too.

Our latest heaping helping of great Guardian gratitude goes to Science Correspondent Nicola Davis, Health Policy Editor Denis Campbell, and Health and Wellbeing Dr. Luisa Dillner, all of whom helped spur the above. We’d also like to thank International Agency for Research on Cancer’s Harriet Rumgay, London School of Hygiene and Tropical Medicine’s Mark Petticrew, and Cancer Research UK CEO Michelle Mitchell OBE, as well as their respective colleagues and institutions. Speaking of institutions, we’d be remiss without showing gratitude to The Lancet (and The Lancet Oncology), the World Health Organization, and Public Health England, in addition to the peer-reviewed substance abuse go-to Drug and Alcohol Review. Non stop looking out. All of ’em.

And you? Looking for someone to thank? Perhaps seeking a reason? Gratitude is a great trait to carry. It’s also a great trait to share. Even better is to have, and to behold, and then to bestow upon someone else. Make a virtual blanket of the thing. Hell, if it were up to us we’d wrap the whole damn world in gratitude. Create a force field of appreciation.

Yeah, so we went a little overboard. Gratitude can do that. Especially when you’re thankful for each and everything you’ve got. If that sounds like a classic soul song, that’s because it is just that. By William DeVaughn. Who racked that track back in ’74. People are still singing his tune today. You should try it out. It’s only a phone call away.