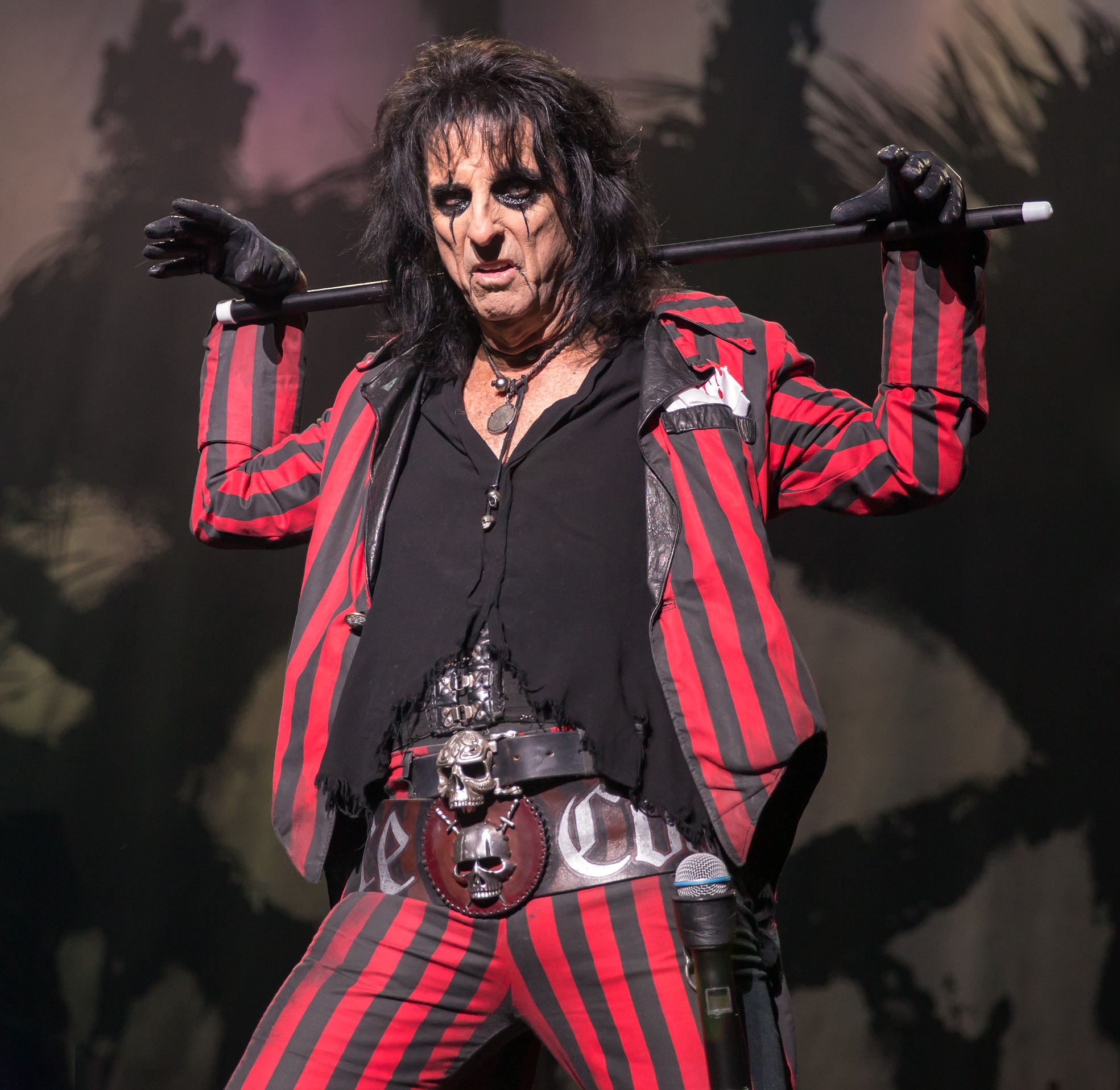 Alice Cooper Gets Audible About Alcohol

Since Alice Cooper invented Shock Rock, it stands to good reason that he’d also invent Shock Rock Honesty. You know, the kind of cutthroat openness that turns peoples’ dreams into nightmares, then twists those nightmares into real life events. Or maybe real death events. After all, Cooper’s trademarks — the sickle, the scythe, the guillotine — certainly don’t promise many bright and shiny tomorrows.

Okay, so in the scheme of things, Cooper’s revelations may not actually be all that shocking. Especially in this dire day and age. There are no gunshot victims or knife attacks or otherwise dead bodies (or otherwise dead babies either, for that matter). There aren’t even any Near Death Experiences; not that we know of anyway. Though for awhile there everyone did seem to think that dear Alice was on the brink of shuffling off this beloved mortal coil.

Nevertheless, there’s sheer, unadulterated candor. And for a figure of his stature who really has nothing to gain from such displays, the stance is, well, a bit shocking. Then again, when people get truly, brutally honest with themselves, there’s always something to be gained. That applies whether you’re Alice Cooper or John Q. Citizen.

That makes Alice Cooper’s Audible offering Who I Really Am: Diary of a Vampire a win-win for everyone.

The morning began like every other morning in the early ’80s — with a head-crushing, eye-gouging hangover. Unlike every other daily hangover though, this one also went deep into Cooper’s guts. If it felt as if they were being ripped to shreds, it’s with good reason. Because they were.

“I woke up and threw up blood,” Cooper told Page Six reporter Nicki Gostin. “And that’s how I kind of knew [the party] was over.”

Cooper’s wife Sheryl grabbed him by the ear and whisked him off to rehab. “”When I came out,” continues Cooper, “I never had a craving for alcohol again.”

Miraculous? Some might say so. In fact, a whole lot of someones might say so. Especially considering the number of addicts who completely lose the urge after a single rehab stint is in the single digits, percentage-wise. That makes Alice Cooper a veritable singular sensation.

So yeah, Cooper again became a singular sensation. It shouldn’t come as that much of a surprise though. After all, it was faith that propelled Alice Cooper to the top of the rock heap. And it was faith that kept him there too. Sure, there were hiccups along the way. That’s life. And in life, when the chips are down you rely upon faith. Especially if it’s every chip you’ve got.

In Cooper’s case however, the faith went back long before there were even dreams of rockstardom. Not only were, as Benya Clark emphasized in Medium, his “father, grandfather, and father-in-law all pastors. [But] when it came time to face the difficult challenge of sobriety, he [simply] relied on the religion he was raised with.”

Now, accounts Page Six, “he’s a devout Christian who prays daily, reads the Bible and credits his faith with helping him stay sober.”

Sometimes life really is that simple.

Cooper’s not the first racket-maker with religion in his bloodstream. Aretha Franklin and Tori Amos are both minister’s daughters. So was the sublime Nina Simone. Racket-wise though, Cooper has most in common with Motorhead’s Lemmy, whose father served as a Royal Air Force chaplain before becoming an Anglican vicar in the Church Of England. Unlike Cooper however, the Legend of Loud apparently never gave up his devotion to speed and alcohol. Be that as it may, both come from God-fearing stock. And both became Rock Gods themselves.

This isn’t the first time Cooper has chronicled his life for the world either. The born-again Christian Rock God’s previous tale-tellings include Alice Cooper, Golf Monster: A Rock ‘n’ Roller’s 12 Steps to Becoming a Golf Addict and the long out-of-print Me, Alice: The Autobiography of Alice Cooper. This is however the first time one of his chronicles has come with new unplugged recordings of the hits “I’m Eighteen,” “School’s Out,” and “Poison.”

Consequence of Sound reporter Greg Prato says “Alice tells great story after great story. Throughout the audio memoir, he is comparable to a ‘rock ‘n’ roll Forrest Gump’ — recounting experiences in which he crossed paths with the likes of Jimi Hendrix, Syd Barrett, Frank Zappa, John Lennon, and Keith Moon, among others.” That alone makes Audible’s latest Words + Music Series offering well worth the price of admission.

What’s Really Shocking About Alice Cooper: Who I Really Am

Again, there was nothing shocking about Alice Cooper acting like a rockstar. Rockstars tend to do that. The really shocking aspect of his life was that he didn’t keep acting like a rockstar. Think about it: not just having access to the best drugs money can buy, but having enough money to buy as much of those drugs as you want, whenever and wherever you want. Makes simply kicking addiction seem like a cakewalk.

But Alice Cooper found a way to be a rockstar without having to destroy himself. If anything, getting clean left him restored. Otherwise there’s no way he’d still be here releasing records and audio books. The Shock Rock God has even just announced another tour!

Yes, Cooper credits his religious faith. But the operative word here is faith. There are all sorts of things worthy of faith; all sorts of things worthy of prayer too. God, Buddha, Jesus, Allah or Zeus, not to mention Mother Nature, Father Time and Mother Earth. Best of all would be to have faith in Yourself. Bend a knee and pray you to be the best you can be. You shan’t be disappointed.

Cooper’s also found another focus of his faith, and that’s his fellow addicts and alcoholics. It began with Megadeth’s Dave Mustaine back in 1986; it’s continued to this day.

“I’ve made myself very available to friends of mine,” he told Mitchell Peters at Billboard. “They’re people who would call me late at night and say, ‘Between you and me, I’ve got a problem.'”

It must be working too. Because when Cooper spoke with Billboard it was in conjunction of his receiving 2008 MusiCares’ Stevie Ray Vaughan Award. The award recognizes people who help other addicts navigate the recovery process. It also encapsulates what Alice Cooper has stood for all along: Pure Faith. Shocking, isn’t it?

How about you? Could your faith use a boost? Does your sobriety need a kickstart? Are you still seeking the right track? Healing Properties can help, you know. If we can’t, we’ll put you with someone who can. Either way, we’ll get you sorted. All you’ve gotta do is call. Really.