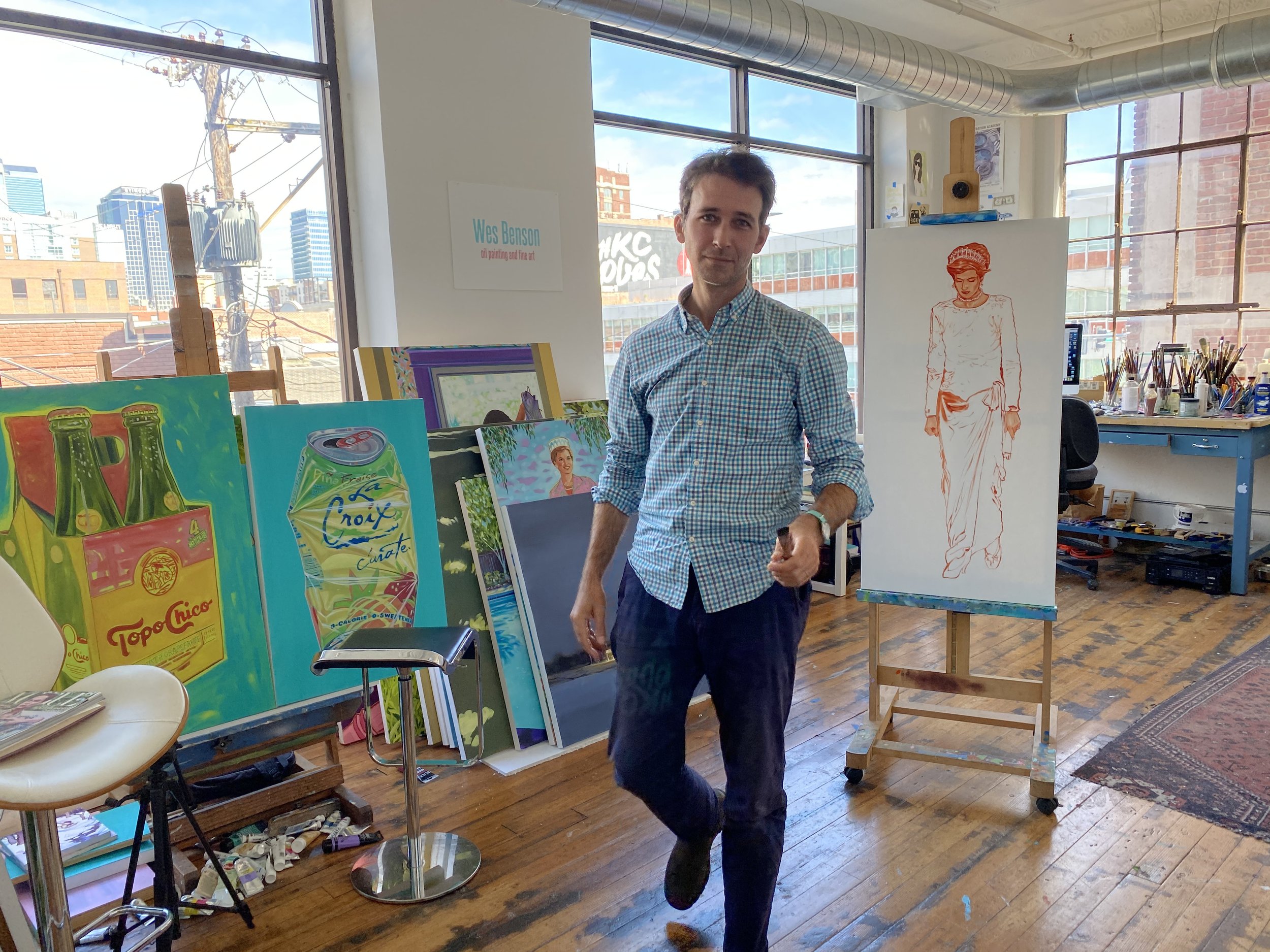 Art and Addiction in Another Smashing Smash-Up

People hear art and addiction and usually think of either musicians and heroin or writers and liquor. But all artistic disciplines have their history of addiction, including those in the visual realm.

Take Andy Warhol. The artist’s frenetic Factory art outlet was run at a hum which reportedly mimicked the speed he took on a daily basis. Or what about Jackson Pollock? His mad paintings may or may not suggest the drunken mess some say he’d become, but there’s no arguing the fact that the celebrated artist died in an alcohol-fueled car crash, and at the far too young age of 44 to boot. Even kitsch king Thomas Kinkade couldn’t keep from drinking and drugging himself to death – and at a hardly ripe 54 no less.

Despite history with both opioids and alcohol, Wes Benson seems determined not to follow in his predecessors’ footsteps. In fact, if Breanne Blankenship’s Roo News profile is any indication, the Kansas City artist is also determined to keep others from getting stuck on that well-beaten path. Heck, if he keeps that up, people just might start looking at art and addiction in a whole new light.

Now we don’t know whether Benson’s drinking preceded his pill popping, let alone by how long or how much. We don’t even know whether or not alcohol or opioids preceded his artistic endeavors. However we do know there was alcoholism in Benson’s immediate family. We also know Wes got into opioids after a series of sports-related injuries. So you could say the seeds of addiction were planted long before Big Pharma came along and hit ’em with a firehose. Would Benson have become an alcoholic without the pain pills? Perhaps. But it’s highly unlikely he’d also have become a junkie.

Whatever the case, Wes picked up both bad habits. Then he got thrown down hard. Damn hard. On the means streets of Bushwick Brooklyn in fact. Woke up with a blade in his gut too. Was Wes copping drugs or merely trying to make his way home? Nobody said one way or another. Bushwick was certainly a haven for drugs back in 2011. But it was also becoming an “in” place for artists seeking cheap New York rents. Either or both, it was by no means a safe neighborhood, and Benson ended up paying the price.

And we do mean paying. Wes ended up suffering a severed colon, as well as severe damage to his kidney. He also almost lost his vision. Thankfully two surgeries and a rearrangement of organs managed to save his life.

Post-trauma does tend to lend itself to drinking and drugging though, especially when the trauma is this severe. Benson’s case was no different. In fact, it was a perfect catalyst. And it’d be at least five years before things began to get better.

Better things did get though. Big time. See, Benson didn’t use the stabbing as an excuse to stay hunkered down on the darkest end of the street. He didn’t need to. Once a person gets that up close and personal to their own mortality, the rest is all just tourist class voyeurism.

The same goes with addiction and alcoholism. Once an addict has completely strung themselves out or an alcoholic has drunk themselves under the proverbial table, putting such bleakness to canvas becomes a bit disingenuous. It also risks wallowing – in despair, as well as self-pity. And wallow is the last place a sober person wants to be.

It does however take someone who’s actually been down the dark end of the street to truly appreciate the many colors of our lives. And here Benson smashingly exceeds the trope. Oranges and reds and yellows and blues collide in wish-sized hues. The color of hope springing eternal, faith staying resolute, dreams being realized. At times Benson finds colors even rainbows haven’t yet fathomed. 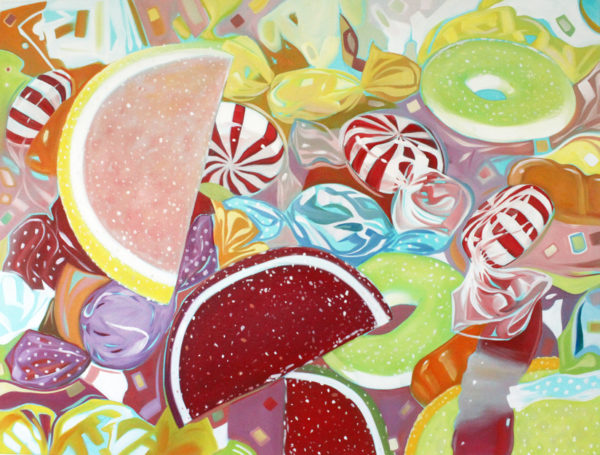 But this ain’t no abstract exercise in blowing peoples’ minds. Far from it. For Benson sets his laser eye on the many colors to be found in our day-to-day lives; then he gives each instance the absolute warmth it deserves. A swimming pool scene represents unwavering friendship. A gas station hints at immense possibilities. Even a tray of jelly bellies evokes unmitigated tomorrows. Each painting a potent reminder that this day is gonna be a damn good day.

Art and Addiction and AA

It all makes perfect sense when you consider Benson’s dedication to sobriety. Like all Big Book belters, Wes lives one glorious day at a time. His paintings are a testament to that fact. Oh, it’s not that they’re riddled with some kind of hidden messages. It’s more about their innate immediacy.

Or as Benson says:

“My paintings are all about the aesthetic beauty of the image itself. I don’t pack my paintings full of bullshit meaning.”

Benson’s brand of No Bullshit is undoubtedly helped along by Alcoholics Anonymous. After all, Wes does run his own AA group (The Freethinkers). He also uses their thrice-weekly meetings to actively seek sponsees. Said sponsees undoubtedly get the message – they have to, it begins with himself.

“The way to recovery is avoiding bullshit, and when you’re an addict the primary source of bullshit is you,” Benson says.

Still, even with all bullshit put aside, addicts and alcoholics do have a tendency to fall back on their old ways. Benson knows this. So do the rest of his fellow Freethinkers. But that doesn’t get in their way.

“We are here to help and support,” says Benson. “We don’t shoot our wounded [either]. Meaning if you fall off the wagon and come back, we don’t judge you.”

Benson seems extra-galvanized by recovery’s recent rise on mainstream radar. He’s grateful for the visibility too.

“Nowadays, it is cool as shit to ask for help,” he tells Blankenship. “If you ask for help, that means you care about yourself and your little galaxy of people.”

It also means you care about what happens to other addicts and alcoholics, especially those who’ve been locked up for non-violent drug offenses. Benson told Blankenship he’s especially heartened to see society is finally realizing the difference between incarceration and recovery.

“Our department of corrections should be called the department of incarceration,” he says, “there is nothing corrective about locking up an addict. Addicts are being punished the same way as the asshole who stabbed me. There is a difference.”

A huge difference. And with artists like Benson showing the world-at-large the many splendid colors of that difference, perhaps everyone will soon see the light.

Healing Properties has been helping men stay sober for 20 solid years. In fact, we just celebrated our anniversary. Two decades means we’ve learned a thing or three about recovery. Would you like to learn a thing or three too? Then give us a ring. Please. It may just be the best call you’ve ever made. No foolin.’