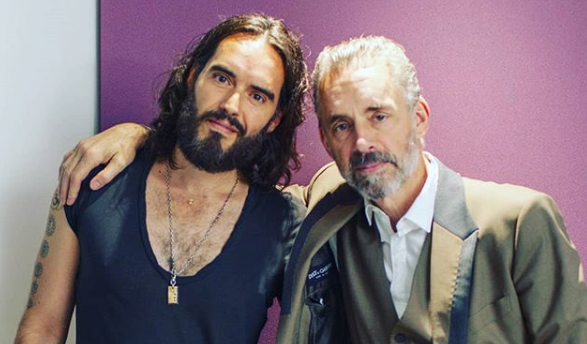 How best to beat addiction might be easier said than done. But not when it comes to wordslingers such as Russell Brand and Jordan Peterson. Brand’s both beaten and written about beating addiction. He’s also extensively spoken on the subject. Peterson, well, he speaks about everything under the moon, the stars and the sun, including addiction.

Here Brand speaks with Peterson about addiction, and how best to beat the deadly disease once and for all.

How to Beat Addiction

Brand’s big on Alcoholics Anonymous. After all, it’s how he himself beat addiction. So it makes sense that his first salvo would come from an idea that permeates A.A.’s Big Book. Considering he’s interviewing a Jungian psychologist Peterson, it makes even more sense he begins with an idea put forth by the late, great analytical psychologist (and early A.A. advisor) Carl Jung.

“People who struggle with addiction will continue to struggle unless they have a spiritual realization of some kind and the support of a community,” paraphrased Brand. “What do you think of that?”

“The spiritual realization component is actually supported by the relevant addiction literature,” concurs Peterson. “[In fact], one of the classic cures for addiction is spiritual transformation.”

“The 12 Steps themselves are an interesting model for transformation,” continues Brand. He finds the method can easily be transposed to anybody who’s interested in change. He even says as much in his book Recovery. Peterson is quick to concur here too. So far, so good.

Brand then starts in on Step One: “We admitted we were powerless over [addiction]; that our lives had become unmanageable.”

“There are three parts to that admission,” says Peterson. “You’re in serious trouble. Things could be better. But you don’t have the wherewithal at the moment to make them better.”

Without directly stating so, Peterson had actually just went through Steps One, Two and Three. He only omitted mentioning the higher power. But it most certainly was implied.

Brand even says as much before moving on to Steps Four and Five.

It’s also a way of facing — and diminishing — your demons.

“As soon as you turn around and look at something,” says Peterson, “it tends to shrink.”

Peterson is also a fan of Step Five’s emphasis on self-examination, as well as the humility it takes to publicly state what you’ve discovered. And how Steps Four and Five, done right, can further recovery.

“If you bring the same set of unexamined presuppositions to every situation,” says Peterson, “the same fate will play out.”

Peterson gets a little Biblical when it comes to Steps Six and Seven.

“This is where you identify the Seven Deadly Sins and how they essentially play out in your life,” says Peterson.

“There are reasons why people are tempted by the Seven Deadly Sins,” adds Peterson, in response to Brand’s sinful prompting. “It’s because they’re tempting.”

The goal is to get beyond those base and unhelpful desires, however enjoyable they might be.

“What are you willing to sacrifice to move forward?” asks Peterson. “You may have to sacrifice the thing you love the best. That’s the fundamental sacrificial motif.”

Brand says this is the part of the program where spirituality becomes undeniable. “You have to call on something else. You have to lay yourself open. The idea of prayer becomes quite important.”

Then, after some Jungian speak regarding the Ego and the Shadow, Peterson concurs.

“Partly what you’re calling on when you call on your higher power is the thing that can guide you through transformations.”

Things get even more quasi-Biblical on Step Eight.

“That’s real repentance,” says Peterson. “Atonement. Atonement is at-one-ment. You don’t want to carry those transgressions forward. You want to step forward through life without that moral burden. Because you’ll have contempt for yourself otherwise. And you won’t take care of yourself.”

Step Nine, of course, is all about action. “Real action,” says Peterson. “It’s not a hypothetical at that point.”

Peterson brings things back to Jung for Step Ten.

“Jung said ‘That which you most need to find will be found where you least want to look.’ Everyone will agree with that. Yet it’s also the greatest barrier to enlightenment.”

“If enlightenment was all tulips and sunshine, everyone would be enlightened,” he adds. “But it’s not. It’s continually bringing before yourself all your proclivity for transgression. Then again, how are you going to solve your problems if you aren’t aware of them?”

And as every 12 Stepper knows, helping others is paramount to successful recovery. It’s why we at Healing Properties have our clients start lending a helping hand pretty much from the moment they arrive. And it’s why we’ve been helping men since 2002. It’s also why we’ll continue to help others beat addiction, so long as there are others with addiction to beat.

If you or someone you know needs to beat addiction, please give us a call. Again, we’ve been helping men beat addiction since 2002. So we know a thing or two about recovery. And it’d be our honor to pass along what we know.