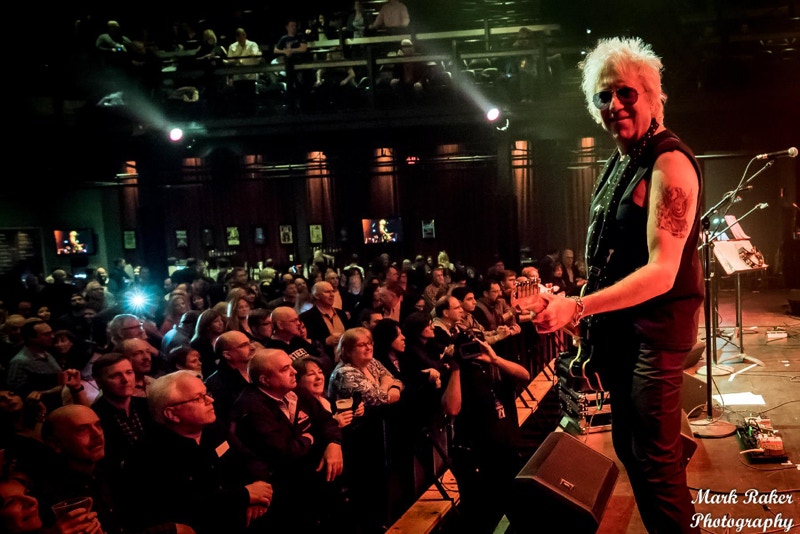 One might think being one of Joan Jett’s Blackhearts would be all peaches and cream. It was really more like Jack and cocaine. At least it was for Ricky Byrd when he played guitar in the band. And Byrd did enough of both to kill a few folks, as well as himself. In fact, he almost did. Kill himself that is. Collapsing a lung while smoking coke before bringing his heart to the brink of a massive attack.

Did that stop Byrd from imbibing? Nope. Not even close. In fact, the guitarist partied heartily for another four years before finally surrendering to his Higher Power.

That was 33 years ago. Byrd’s spent much of the intervening decades helping himself and others take life one perfect day at a time. He even got officially credentialled to counsel users of drugs and alcohol. Became a certified peer recovery coach too. And for the most part being both sober and supportive was enough to keep him going.

Every once in awhile though Byrd would whip out his guitar and strum a few songs at this or that rehab and that certain feeling would wash all over him. No, not a yen to drink or to drug. But a yen to make music again. And to bring that music to the public.

Have Recovery Will Travel

So Ricky Byrd wrote a song or two. Then let ‘em rip at a few treatment center fundraisers. The response was more than he expected. Much more. The clients not only dug the music Byrd was doing, but they also dug the fact that the songs remained true to recovery. After all, it’s one thing to hear your story shared in a meeting. It’s quite another to hear it put into song and sung from a stage.

“Every time I’d do one of these events,” Byrd told the Farmingdale Observer, “I’d be lingering around after the show and people would come over and say they grew up on my music; thought it was cool that I was doing this and they were in.”

“It kept happening,” he continued. “People felt like I was singing their story and wanted to know where they could get these songs. Before long, I started to get this message in my brain about combining two things — helping people and playing some rock and roll.”

Byrd was on to something alright. So he got down to some serious songwriting. The result? Two full albums that “deal with addiction, recovery, hope and change — for the better.”

The first, Clean Getaway, racked back in 2017. The follow-up, Sobering Times, just racked this month. Both are what you’d expect from a classic rock n’ roller with 33 years of sobriety under his belt. They’re also what you’d expect from a musician who spent his more formative years touring the world with one of rock’s most badass racketmakers. In other words, the albums rock. Dig? Even in the quiet moments. And they never once compel you to reach for the bottle, the needle or the straw.

They might make you say good riddance to all that nonsense though. And with good reason. Byrd’s a loyal and sober troubadour.

From Blackheart to Troubadour

Here’s how Ricky Byrd summed up his last bout of severe unpleasantness.

“I was standing in front of the mirror,” he recalls, “my nose was bleeding and my heart is beating out of my chest. I’m drunk off Jack Daniels and high from this, that and the other thing. And I was rifling through the medicine cabinet, as I would normally do, looking for cold pills to bring my heart rate down.”

Then something clicked. “I literally picked up the phone and called this person,” Byrd continues. “She said there was a community support meeting at four o’clock the next day and asked if I could make it. I said ‘yes.'”

It was much easier said than done.

“From 30 to 31 was the worst year of my life,” said Byrd. “Because that was when I finally took a hard look and saw that I couldn’t stop. I have my diary from that year. I would write that I wasn’t going to get high on that day and then I’d say well, I’ll start that night. It went on like that all year until I finally surrendered. Luckily for me, it’s been continuous for 33-plus years.”

No, Mr. Byrd. Luckily for everyone. Really.

Byrd now considers himself a recovery troubadour. It’s even there on his site. Furthermore, the axe-wielding recovery troubadour also envisions a tour bus draped with the mantra “Have Recovery, Will Travel” which he’ll take across the country and help spread the good word. It won’t be easy. (Nothing is.) But we think once the world returns, Byrd will definitely get his wish. Remember, the guy’s not only got sheer will, but he’s also on the side of the angels.

“Supporting recovery while reducing the stigma is a huge problem,” he said. “If you do a fundraiser for cancer or diabetes, people come running. But when you start talking about addiction, a big portion of society thinks it’s a choice and you’ve done it to yourself. It’s our job to get out there and try to reduce the stigma. People like me are boots on the ground. We’re trying to change minds and save lives.”

Healing Properties wholeheartedly applauds Ricky Byrd’s ferocious sobriety. Few folks manage to maintain such passion even three years into something. To maintain such passion thirty-three years into something is beyond remarkable. That he’s bringing so many folks along for the righteous ride only amplifies the magic of it all.

We also wholeheartedly congratulate Byrd on the two albums. In fact, we recommend visiting Ricky Byrd’s web site and picking up copies for yourself. Byrd’s got both talent and insight, which makes him just the kind of cat you want singing about something that means so much to so many. Byrd also happens to be in the Rock & Roll Hall of Fame. And if that doesn’t make him more than worth your while, well…

Speaking of worthwhile… how are you doing? Making it through 2020 okay? How ’bout your loved ones? They good too? If not, we’d be glad to help out. Seriously. Just give us a shout. Any day. Any time.