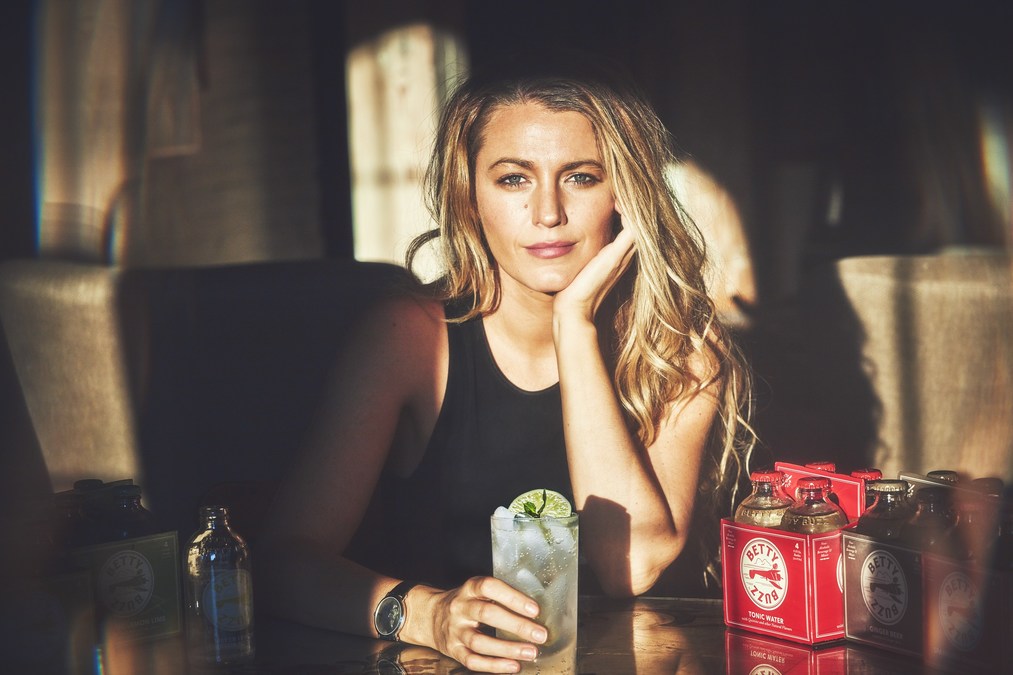 The cool kids have been doing it for a few minutes. A good few minutes. So many, in fact, that it’s about to become a thing. A real thing. When that happens — Watch Out! Because the whole wild world will be abuzz. As in Betty Buzz abuzz. And Blake Lively is determined to make certain of it.

Then again, why wouldn’t Lively wanna make certain the world becomes abuzz about Betty Buzz? The effervescent line of five drinks mixers is her baby. Her certain determination makes even more sense when you consider the multi-hyphenate star’s serious side roles playing “foodie and cook.” Wiki evidences Lively’s habit of immersing herself in cookery classes while she’s on the road. It also cites how she augmented her culinary skills at Paris’s renowned Le Cordon Bleu and designed a custom La Cornue oven for her new home. Throw in baking a cake with her “idol” Martha Stewart and you’ve definitely got an op with seriously applied tastes.

You’ve also got someone who takes taste very, very seriously.

But not without joy, mind you. Serious joy. Indeed, after three years of solid work bringing Betty Buzz to the public, Lively seems to be seriously enjoying herself throughout the three months since its launch. She also seems seriously taken aback by all the support.

“I’m so happy to have something [like this], because I thought I’d be an outlier,” she told People. “It’s a mixer, [yet] I’m the one person who doesn’t drink. But it’s been neat to see how many people have come out and embraced it.”

Lively’s got some serious support behind her too. In addition to her husband Ryan Reynolds, who’s shown up on a number of occasions to help hype the brand, she’s also got the likes of Dwyane “the Rock” Johnson and Hugh Jackman cheering her on.

“It was neat to see men show up like that, and not tell me, you know?,” says Lively, in that same People interview. “I was surprised seeing it on their social media.”

Lively attests to even more support to be had though. Much more. Especially important so far as the Sober Set is concerned.

“It’s been really neat to see all of the non-drinkers who have come out and said ‘thank you.'”

Sure, Lively doesn’t drink. She’s not a card-carrying Sobrietist either. She just simply doesn’t drink. So the fact that the Sober Set is also stepping up to embrace her and her venture means much. After all, they’re highly unlikely to have any vested interest in Betty Buzz, personal or otherwise. And they’re certainly unconcerned with mixing it with Aviation Gin.

But Betty Buzz transcends boundaries. So does Lively. Besides, the product tastes great straight out of the bottle. Whether you prefer Tonic Water, Sparkling Grapefruit, Meyer Lemon Club Soda, Sparkling Lemon Lime or Ginger Beer. Even better, all the tasty flavors come in a rather charming bottle to boot!

Healing Properties extends a hale, hardy and heartfelt Thank You to Blake Lively for creating and launching Betty Buzz. Endemic boredom is one of the biggest fallacies about sobriety; so anything that can contradict that mis-impression is most welcome. Yeah, we know. Lively didn’t create Betty Buzz specifically for the Sober Set. Nevertheless, she’s come up with something that can actually excite sobriety. And that is cause for celebration. Folks should know that being sober can be just as much fun as being non-sober.

And so what if Lively isn’t in recovery? She doesn’t drink. And that’s sober enough. It doesn’t matter that she’s married to a gin-slinger either. If anything, that makes Lively an even better ambassador. Gucci and L’Oreal certainly believe so. So does British Airways. Why else would the company now be featuring Betty Buzz in all their U.S. airport lounges?

Why else indeed. Lively’s been on the right side too many times to count. And she’s on the right side now. Come on! A non-alcoholic mixer made with clean and certified non-GMO ingredients that can actually excite your sobriety? It doesn’t get much more right than that!

If you or a loved one need help with recovery, we’d very much like to help. So please, give us a ring.