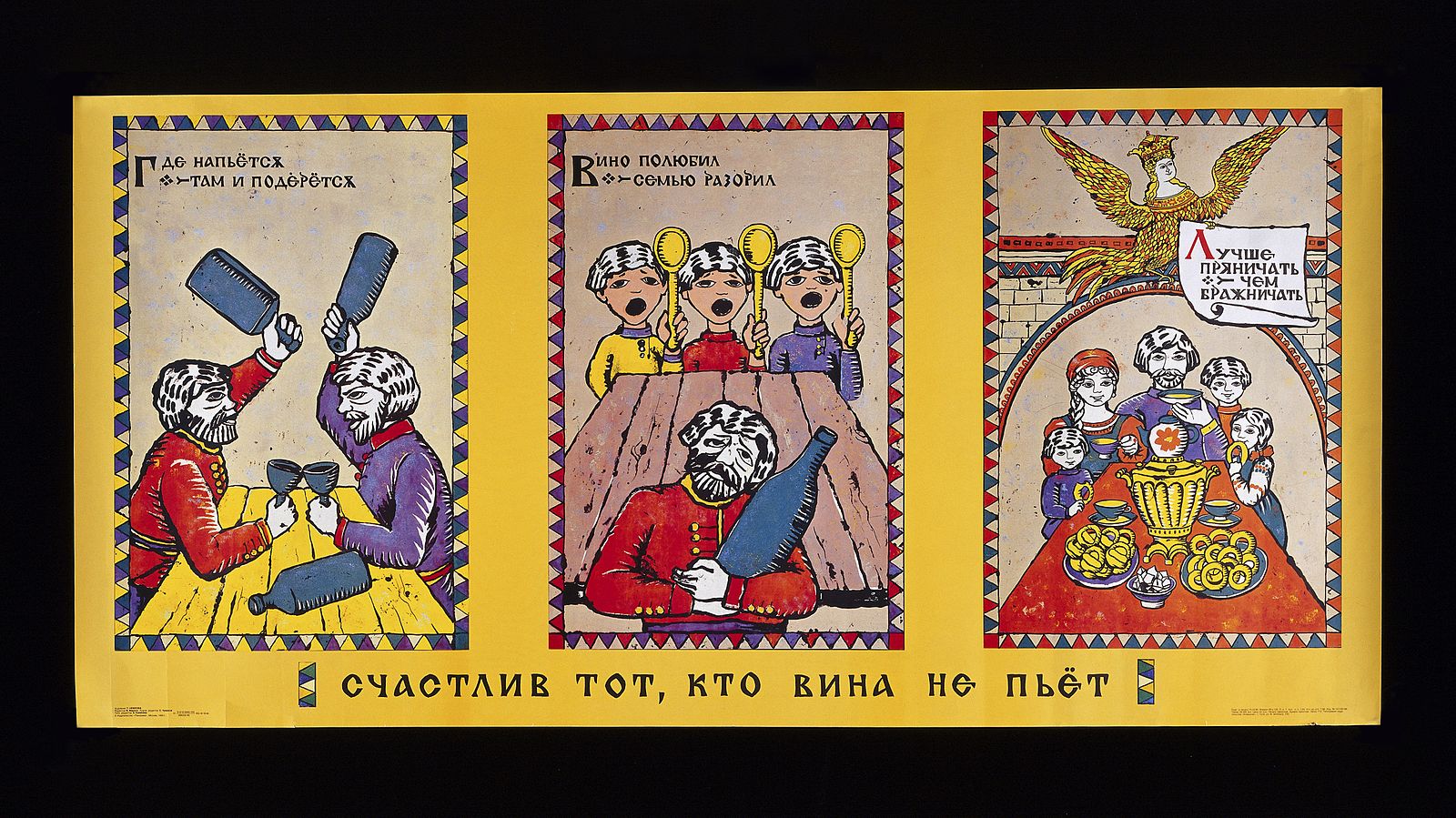 A Brief History of Alcohol: Know Your Poison

People have been boozing it up for at least 9.000 years. Since then we’ve gone from enjoying the placid effects of naturally-fermented fruits and grains to cooking up the kinds of spirits that can drive folks cuckoo. At first it was easy, and the world largely managed to keep a lid on the pot. When it came to the bottle though, we too often let things spin out of hand. This crash course in the history of alcohol will bring you up to the point when our world began to go nuts.

Okay, so maybe the whole wild world didn’t completely go nuts. Enough of it did though to cause some serious commotion. Considering a species can only take so much commotion before it begins to lose its way, our world started turning off course. People crashed. Places burned. Then things got even worse. Much worse. It is only now that we’re beginning to experience some kind of a course correction.

Why the shift? Simple. Some good newly-fashioned common sense. Same as the old brand of common sense, but better. See we know more now. Much more. And with that knowledge comes the power to change things.

We’re still not quite there though. There’s still work to be done. Habits need to be re-formed. Choices need to be remade. Beliefs need to be reconsidered. And practices need to be perfected. Mostly though, we need to know where we’ve come from and how we got here. This way we can prevent ourselves from slipping back off track.

That’s why it’s so important for each and every one of us to know the history of alcohol. That’s right. Each and every one of us. See, alcohol is intrinsically tied to everyone’s past; not just drinkers and those who love them. But everyone everywhere; that includes drug users. For abuse is abuse no matter the substance. So is addiction. Consequently, when we learn about alcohol, we can better understand ourselves.

But fret not. This isn’t some pedantic lecture about how and why to behave yourself. Far from it. If anything, it’s just the opposite. A fistful of fast facts thrown like a punch that lands right on the button. What you do with these facts is of course up to you. All we can do is arm you.

The History of Alcohol

7,000 BCE. China. That’s the date and place when humans first consumed alcohol. That’s where our earliest known evidence comes from anyway. Residue in clay pots which revealed that people were making an alcoholic beverage from fermented rice, millet, grapes, and honey.

See, sugars in overripe fruits and grains attract microscopic organisms. Those organisms are named yeasts. When yeasts feed on the sugars they ferment. That fermentation produces a compound called ethanol. And yep, you guessed it, ethanol is the type of alcohol found in our alcoholic beverages.

It didn’t take long before cultures from all over the world were fermenting their own alcoholic drinks. A few thousand years, give or take. Ancient Mesopotamians and Egyptians made beer from cereal grains. Everyone got to enjoy the brew too, even the working class, who received it in their daily rations. Those early ancients also made wine. But the climate wasn’t really grape-friendly. So the wine became a rare and expensive delicacy.

In Ancient Greece and Rome however, wine flowed as freely as their southerly and easterly neighbors’ beer. Since yeast is open to ferment on just about every naturally-growing thing, other ancients brewed up with whatever they had most at hand. South American peoples made chicha from grains. Mexicans made pulque from cactus sap. East Africans made banana and palm beer. And Japanese made sake from rice.

Naturally, there was no South America, Mexico or Japan way back when, but you get the drift. Some form of alcohol was being made and consumed almost everywhere the world turned.

Then folks started being concerned with how alcohol was making the world turn. Greek physicians and their poet pals considered wine to be good for health and creativity. Others weren’t so sure. Greek philosophers cautioned against drink, promoting instead temperance. And though early Jewish and Christian Europeans integrated wine into their rituals, they all considered excessive intoxication to be a mortal sin. Muslims went even further. And Islam’s initial ban against drunk praying beget a ban on alcohol altogether.

Nevertheless, that ancient wine and brew was only about 13% alcohol at best, so it took a whole lot of drink to get drunk. That, in turn, kept drinking problems at a relative minimum. Then came distillation though, and just like that, the drinking scene changed considerably.

Then the World Spins

Distillation did just what it sounds like it did — distilled the alcohol into a concentrate. That meant it was easier to store, easier to ship, and, most important perhaps, more potent to drink. It also meant no spoilage. So those stronger spirits became a benefit to everyone, from the medical community to the trade industry.

Trading liquor for goods is one thing; trading it for people quite another altogether. And the trade boom in alcohol ran pretty much concurrent with the trade boom in slaves. Furthermore, those stronger spirits spurred the traders themselves, helping to create a warring class fueled with bloodlust, greed and ever more liquid courage. The age of the drunken pirate was upon us.

Drink helped drunks in other ways as well. A bucket of brandy in a water barrel would help keep the sailors safe (from deadly microbes anyway). And when water ran short, beer was an obvious substitute. The same applied on land, of course. In fact, alcohol did help people, in many ways, be it with disease or parasites or what have you. Then again, it also became one of the largest scourges civilized society ever faced.

The Living History of Alcohol

And continues to face to this very day. To be sure, civilized society still faces alcohol’s scourge. It continues to destroy individual lives, as well as the lives of families. And not just the drinkers’ lives either. And not just the lives of people they know. How many times did an alcohol-enraged individual get behind the wheel of a car or the barrel of a gun and kill a stranger? No telling. Just as there’s no telling how many other victims were felled in each barbaric incident.

And don’t think for a moment that when an alcohol-soaked someone uses the last sip in a bottle to mark the last minute of their own life means others don’t suffer. All kinds of people suffer because of such selfishness, from the first-responders (who may not find the body for some time) to a friend or neighbor (who may unwittingly stumble upon the corpse) to the family itself (who’ll forever have to live with the guilt and the wonder). Hell, such selfishness often even puts the bad idea into the heads of people on the brink — with catastrophic results.

Okay, so not every drink gets someone drunk. Not every drinker grows down to be a drunk either. There are plenty of instances where alcohol can and is used responsibly. Unfortunately, the history of alcohol is rife with far too many instances of it being used to the detriment of everyone. It all really comes down to knowing yourself. So, if you can’t handle alcohol — don’t drink. Please. That’s the absolute best way to prevent hurting yourself and/or others.

It doesn’t get any simpler than that.

Healing Properties wholeheartedly thanks Carleton University Professor Rod Phillips and ace animator Anton Bogaty for creating such a keen, cool, colorful and enlightening clip. The Brief History of Alcohol has never been so delightfully chronicled. We also wholeheartedly thank the great good folks at TED-Ed. They’re as great for the brain as they are good for the soul — and vice versa!

What do you say? You ready to change? Set to flip the script and start living again? Sobriety can work wonders, you know? Real wonders. From restoring your hopes, to fulfilling your dreams. Really. Check our Testimonials. We’ve got encouraging words from alumni, as well as from their families. And each and every one raves about sobriety. Yes, they also rave about Healing Properties. But we’re simply the guides. Our job is twofold: to help, and to succeed. So please, give us a ring. Let us help you succeed in sobriety. You’ll be glad that you did. Damn glad.