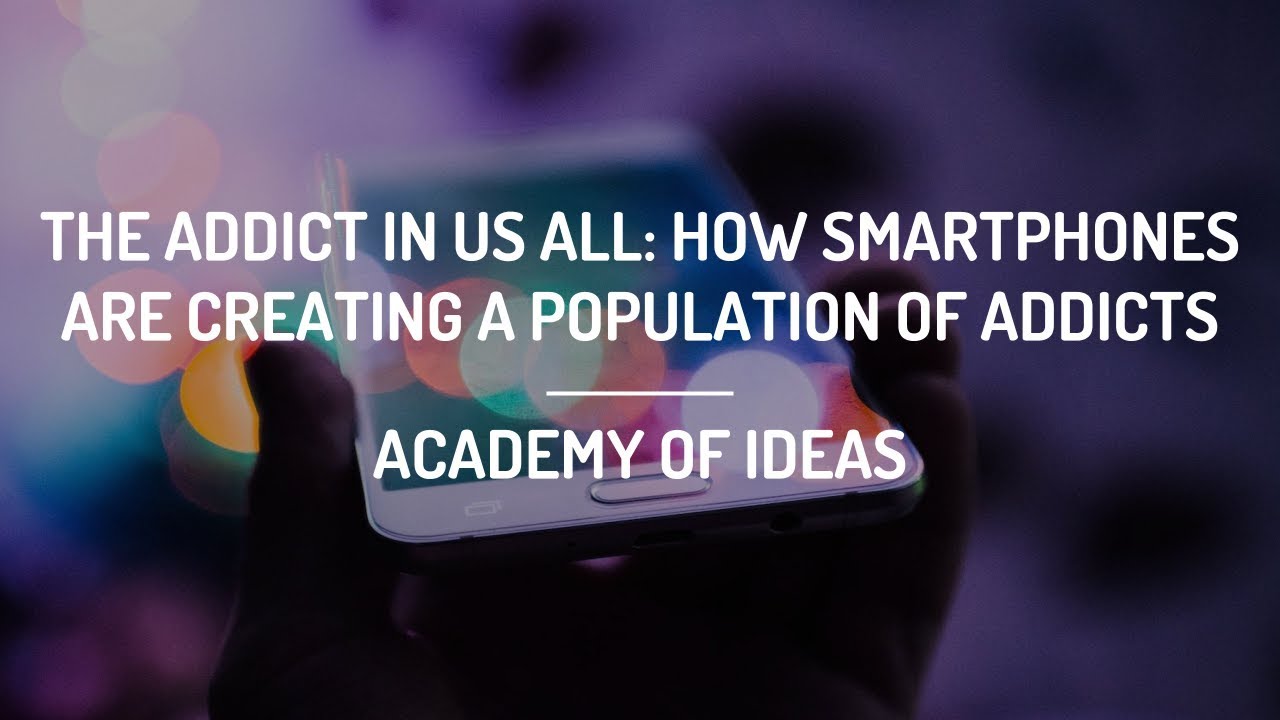 Cellphones and Heroin: Are You Addicted to Both?

Cellphones and heroin have too many addictive similarities to dismiss out of hand. But are the two also similarly detrimental to our health and well-being? In a word: Yes. So say the great good folks at The Academy of Ideas anyway. They’ve even pulled off a rather compelling drive-by in order to prove it. The rat-a-tat-tat is entitled “The Addict in Us All.” And the aim is so true, it just might shoot that cellphone right out of your hand.

It’s not entirely heroin either. These days meth and coke and fentanyl are all on continuous play too. But whatever the device and whichever the drug, once you double up you’re more than twice as likely to crash and burn. Unfortunately for America, doubling-up seems to have become a thing.

So what are we gonna do about it?

Well, the Academy of Ideas has some ideas.

The Addict in Us All

“The Addict in Us All” eruditiously explains “How Smartphones Are Creating a Population of Addicts,” just as its subtitle promises. The specific target is “the triad of smartphones, the internet, and social media,” and the inordinate amount of fleeting pleasure the grouping produces. Once the Academy summarily raises the issue though (and deftly dispenses with the old disease vs behavior argument), they cut right to the Why of it All. Namely, novelty.

One of the reasons that smartphones, the internet, and social media are so effective at providing their users with small doses of pleasure is due to the access to novelty they provide. Humans evolved to seek novelty, be it new sources of food, water, sexual partners, land, or information, and as contemporary brain research has shown, access to novelty is intrinsically pleasurable. But in comparison with our ancestors, for whom novelty was relatively scarce, our sources are boundless. A near endless stream of novel content is now available at the touch of our fingers and exposure to this content provides us with the small hits of pleasure that can help relieve psychological discomforts.

But the Academy isn’t content to merely explain why the triad is so insidiously successful; they also want to know what that why means to the practitioners. Not personally mind you (that’s another story), but consequentially. After all, an entire populace can’t continue to obsessively chase digital rainbows without some sort of repercussions.

And here’s where the Academy really gets meaty. In fact, this is really where we get to the real meat of the visual essay. See, it’s not enough to know that we do something, nor even why. We’ve also got to know the consequences. First, to try and mitigate them; then to attempt to prevent them completely.

Yeah, we hear you. Good luck with that, right? We don’t blame you. Like novelty, in this case the consequences are endless. And then some. Attempting to mitigate them too? Well, let’s just say futility doesn’t even begin to cut it.

Thankfully, the Academy has us covered. In fact, the essay doesn’t even begin to entertain that vast array of consequences. Instead, they go straight for one of its most debilitating. And one that truly represents loss. More, they employ one of history’s most acute thinkers in order to back their play.

Okay, so employing one of history’s most anti-social philosophers in order to make a case against social media might at first sound like an iffy proposition. But if you consider the amount of societal thinking this cantankerous young walk alone conducted over his highly conducive life, well, the notion actually makes perfect sense.

“Speak not of gifts, or innate talents! One can name all kinds of great men who were not very gifted. But they acquired greatness, became ‘geniuses’.”

That snippet springs from Nietzsche’s classic Human, All Too Human, a vast and aphoristic look into what makes our species tick. Nietzsche firmly believed greatness wasn’t something one was given; it was something one earned. And he spent a lifetime proving that those who duly and diligently apply themselves will indeed triumph in the end.

The Academy seconds that emotion. That’s why the notion kickstarts their take on this new universal addiction. Like Nietzsche, they believe diligence wills out. That we’re as likely to swipe our way to true love as we are to Pavlov our way to achievement. And those teensy little cellphone pleasures that we’ve all become enthralled with are nothing more than fleeting teases, and, like heroin, they will in no way benefit the user. Ever.

No, the objection isn’t new. Folks have been coming around and asking us to step away from the smartphone for as long as our phones have smartened up. Those folks will likely keep coming around too, until we actually do drop our phones. Or at least until we regulate our useage.

That seems to be the key. Regulate our useage. Not everyone has the same penchant for either cellphones or heroin, let alone both. Sure, some folks might need a complete intervention from both. Others simply a stern lecture from one of the two. Still others won’t need any outside help whatsoever. But if we realize what’s at stake and respond accordingly, well…

Here’s how the Academy plays it out:

Recognizing the addictive nature of smartphones and the impact their use has on our attentional faculties should make it clear that excessive use of these technologies is a hindrance to a fulfilling life. For assuming our peak physical and mental years are between the ages of 18 and 50, if we spend three hours a day on our smartphone – which is the low end of the estimated average for adults – when we turn 50 we will have spent four years staring at our phone.

Think about it. Four years wasted on the phone. Talk about a gap to look back on.

Thankfully, the Academy doesn’t leave us with nothing but pending regrets:

But if we suffer from an addiction to our devices we should realize that there is a silver lining – for if we have enough time to stare at a small slab of glass for hours each day, we also have plenty of time, if we so choose, to participate in activities which challenge and enrich us or to devote ourselves to the mastery of a certain vocation. The time we spend on our phones, in other words, is time that could be used to create a life that we can truly be proud of, for as Nietzsche recognized.

“In such a highly developed humanity as the present one each man by nature has access to many talents. Everyone possesses inborn talent, but few possess the degree of…acquired toughness, endurance and energy to actually become a talent, that is to say, to become what they are.”

What do you say to that?

Cellphones and Heroin and Gratitude

This isn’t our first time citing The Academy of Ideas. And it surely won’t be our last. How could it be? We initially called the gang “about the most well-rounded explainer/thinkers on the interwebs.” That consideration stands. If anything, it stands even taller, broader. So it’s a cinch we’ll be returning to the mind miners again (and again). Especially since the Academy always seems to outdo itself.

Before we go though, we’d like to Thank the gang for so keenly coming up with yet another heaping helping of edification. The more help that comes along, the more help we’ll get. Especially when that help comes in such learnedly attractive packages. Do yourself a favor and head on over to the Academy of Ideas YouTube page and see what we mean.

Speaking of favor… Are you having issues with cellphones and heroin? If so, don’t fret. You’ve got loads of company. You’ve also got loads of helpful options. So do yourself a favor and phone someone. SAMHSA has a helpline. So do the good people at NIDA. You can call Healing Properties too. And we’ll swiftly get you situated.