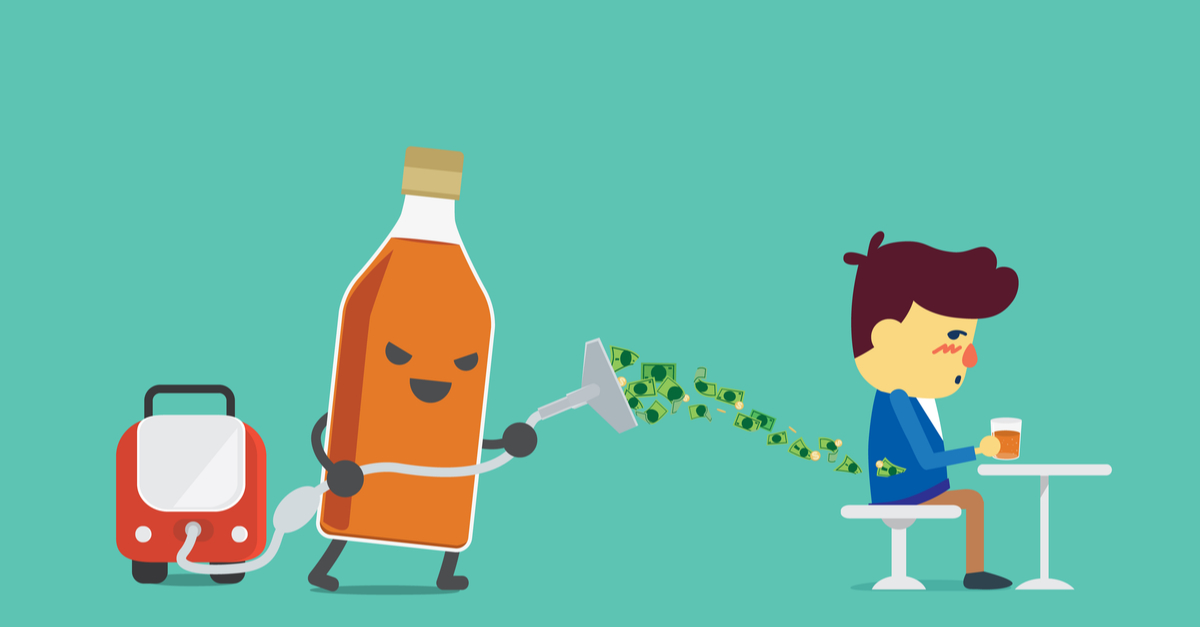 The Cost of Alcoholism in America

The cost of alcoholism takes many factors into consideration. Consequently it isn’t always easy to calculate. That’s one of the reasons the costs themselves are rarely even considered. It’s also one of the reasons those costs are so considerable. But as the Journal of the American Medical Association (JAMA) finds — and Yahoo Finance Senior Editor Adriana Belmonte reports — we ignore those costs at our peril.

Calibrating the Cost of Alcoholism and Other SUDs

The new JAMA study concentrated on how much hospitals’ bottom lines are impacted by drinking and drugging. In fact, the study’s name is “Assessment of Annual Cost of Substance Use Disorder in US Hospitals.” It ranked the costs by substance type (e.g. alcohol, opioids), as well as number of encounters where either principal or secondary SUD was diagnosed. It also calculated whether those visits were Emergency Department or Inpatient.

“The researchers calculated the cost using a method known as mathematical modeling, in which they factored in hospital encounter costs — controlling for patient demographic, clinical, and insurance characteristics — and compared encounters with and without a secondary SUD diagnosis,” writes Belmonte.

These researchers did some serious calculating too. The number of emergency department (ED) encounters totalled a whopping 124,573,175, while in-patient encounters numbered their own impressive 33,648,910. Where’d they get the numbers? The Agency for Healthcare Research and Quality’s 2017 Healthcare Cost and Utilization Project (HCUP) Databases. AHRQ says “HCUP is the Nation’s most comprehensive source of hospital care data.” And considering it’s “a family of databases, software tools and related products developed through a Federal-State-Industry partnership” that AHRQ itself sponsors, well, we believe them.

This study relied on two exhaustive HCUP Samples (aka databases): the Nationwide Emergency Department Sample and the National Inpatient Sample. It then broke down those databases into “principal” and “secondary” categories. Principal, of course, meant SUD was the main reason for the hospital visit; secondary meant that it was a condition accompanying the main reason for being there.

The overall total? $13 billion. Plus.

“The $13 billion annual cost is due to the fact that many hospital encounters include a substance use disorder diagnosis and because each such hospital encounter is costly,” the CDC’s Cora Peterson told Belmonte. “This study identified that 4% of all ED visits and 10% of all inpatient admissions — or nearly 5 million ED visits and 3.5 million inpatient admissions — in 2017 included a substance use disorder diagnosis.”

Cora Peterson is a senior economist at the CDC’s National Center for Injury Prevention and Control. She also happens to be one of the co-authors of the report. So she knows well of what she speaks. Quite well indeed.

Which SUD Costs the Most?

So which substance is costing hospitals the most? Well, surprisingly enough, it isn’t opioids. Yes, opioids are responsible for most overdoses, fatal and otherwise. And yes, overdoses are at an all-time high. But it was alcohol which made the biggest impact on hospitals’ bottom lines. In fact, alcohol accounted for well over half of the $13 billion hit.

JAMA included every imaginable substance in its study too. And their final results ranged from a $4 million low (for inhalant-related disorders) to alcohol’s astonishing $7.6 billion high. And while we may have been surprised opioids didn’t carry the dogged day, National Institute on Drug Abuse Director Dr. Nora Volkow most decidedly wasn’t.

“It’s not surprising because alcohol is the most accessible of all the substances,” the good Dr. Volkow told Belmonte. “I can go one block from my house and, even when everything was closed, the liquor store was open in my neighborhood. It’s accessible in every single way. We’ve made alcohol drinking part of our social interaction; part of our everyday routine. So no, that’s not surprising at all.”

Dr. Volkow also cited the fact that, aside from a minimum drinking age, alcohol has no federal restriction. All other regulations are left up to the states.

“You want to educate people about the harmful effects of alcohol,” she said. “How do they emerge? It’s the same thing, actually, that some of the states are trying to do in different ways with marijuana. Educating the public about harmful patterns may minimize the risk associated with their consumption.”

Without proper education, she added, we’ll have increased prevalence. That often leads to increased consumption, and heightens the risks associated with substance abuse.

Furthermore, without proper education, any legal drug will cause much greater damage than its illicit counterpart. That’s “not because they’re more dangerous,” she said, “but because of their wide access and consumption.”

And that access is spreading wider by the year. So is the consumption. Belmonte says the Distilled Spirits Council reported that U.S. distillers revenue grew to $31.2 billion. That’s up 7.7% from the previous year. It also marks the fastest growth and highest sales for at least the last 40 years. And people aren’t buying the cheap stuff either. Alcohol costing over $40 per 750 milliliters (a metric fifth) accounted for 40% of the U.S. spirits industry 2019 growth.

Volkow would like to see public service campaigns rivaling those used to fight cigarette smoking. Such campaigns, which began in 1967 at the behest of the FCC, and pretty much peaked in the ’90s, were responsible for a considerable decline in tobacco-related deaths (and of course costs). In fact, the American Academy of Family Physicians (AAFP) says cigarette smoking among U.S. adults has declined “about two-thirds in the more than 50 years since U.S. Surgeon General Luther Terry, M.D., issued his landmark report on the health consequences of smoking.”

“That has been a very successful overall campaign of prevention” said Volkow. “The prevention campaigns for alcohol have not been nearly as effective.”

Worse Before it Gets Better?

Will alcohol abuse (and the consequent cost of alcoholism) actually get worse before it gets better? Probably so. Unfortunately. Despite the fact that the Covid pandemic has already caused a considerable increase in alcohol consumption and abuse. In fact, Covid is also the reason things will most likely become even worse. Much, much worse. “I’m afraid that once we actually control the COVID pandemic, we’ll be left behind with all of the mental turmoil that the pandemic has entailed,” said Volkow. “We know that social stress actually increases the risk of substance use and mental illness; economic downturns also become very problematic.”

“The loss of jobs is extraordinarily stressful,” she continued. “And we know that’s associated with increased risk for drug taking, and also anxiety and depression. Similarly, many people have lost friends, family, relatives… and those are difficult losses to deal with. Then there’s the fact that so many lives have been put on hold.”

Dr. Volkow makes a very salient point. People are hurting. Still. And when people are hurting they often turn to substances. Often too often. Yes — thank Zeus! — we’ve almost got a grip on Covid. And yes, more folks are going back to work and school. AA and NA meetings are opening back up too. But what’s to happen to those who for whatever reason can’t yet reengage? Or worse, those who are so desperate to rid themselves of a pent-up year they’ll hit the first open bar they see? It’s hard to believe there’ll be a seamless end to something as massive as a pandemic.

That’s where treatment comes in, as well as the aforementioned education. Both of which are much better served having access to studies like JAMA’s. Healing Properties salutes those tireless stakeholders — JAMA and NIDA and the CDC. And we thank them for ensuring that Substance Use Disorder remains a part of the national conversation. We may still be a long way from resolving the issue, but that doesn’t mean it can’t be effectively addressed. These folks prove just that each and every day, in each and every way.

So yeah, if you’re suffering from SUD, or if you’ve got a loved one who could use some help with drugs or alcohol, please, by all means, reach out to someone. NIDA has an excellent helpline. We’re here to help too. Remember, no matter how high the cost of alcoholism and addiction, you don’t have to shoulder it alone.