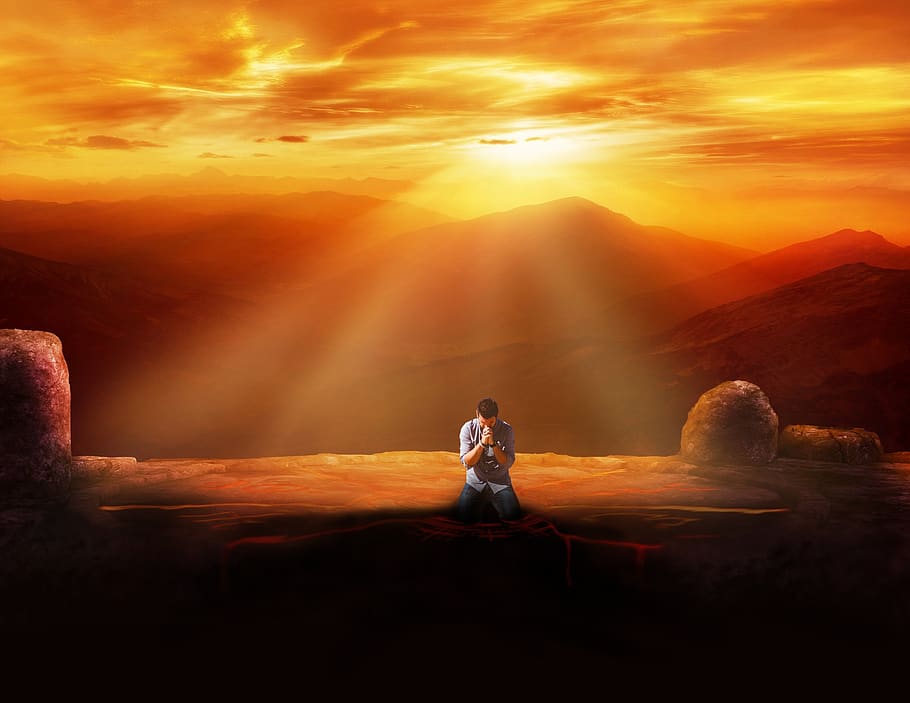 People generally learn about the power of deep prayer during their very first week in recovery. Sometimes they’ll learn about its power on the very first day. And why wouldn’t they? Most addiction treatment centers and sober living homes adhere to the practices and principles found in Alcoholics Anonymous. And AA is perhaps the world’s largest advocate of deep prayer.

Even if your recovery facility doesn’t run on the 12 Steps, you’re quite likely still attending AA meetings. And if by chance you’re not, nearly every AA alternative also advocates deep prayer. In fact, some AA alternatives (i.e. Refuge Recovery) even out-advocate AA! That’s how crucial the practice is to a successful and long-lasting recovery.

Before we get any deeper into deep prayer, let’s make one thing perfectly clear: the efficacy of deep prayer has absolutely nothing to do with religion. Nothing whatsoever. Oh, it can be religious. And if religion is your thing, then by all means, have at it! But it doesn’t need to be. One religion isn’t any better or worse than another. And religion won’t make prayer any more or less effective. Prayer is non-judgemental. And it’s gotta stay that way.

Belief on the other hand is a whole ‘nother story. In fact, it’s perhaps the single most integral component of deep prayer. Not what you believe in, mind you. But that you believe. And yes, that you believe deeply. If you don’t truly believe in your prayer, there’s no chance that prayer will be answered. Heck, it probably won’t even be heard.

So, in short. Have faith. In yourself. In others. And in your prayers. Whether you’re praying to the above or to the within. Most of all though, believe deeply.

What’s so hard about hitting your knees, folding your hands, closing your eyes and having at it? Glad that you asked. Because on the face of it, deep prayer does appear to be a rather easy task to accomplish. Accomplishing an act however is a far cry from achieving your goal. Especially a goal of this magnitude. After all, we’re talking about tapping into the divine. And that takes much more than simply going through the motions.

That’s why guidance comes highly recommended. There are people out there who’ve been there, done that and are willing to help show you the way. In fact, they’re rather eager to do so. And it’s in your best interest to take advantage of their generosity.

Reverend Theodore Nottingham is by far among the best of those guides. A self-professed “teacher of spiritual awakening for people of all backgrounds,” Reverend Ted is also an author and translator and all-around scholar. In other words, he’s about as accomplished as they come.

The right Reverend Ted also fields a YouTube channel that’s chock-a-block with some incredibly profound spiritual teachings. Many of the lessons tie-into the courses he conducts at Inner Work for Spiritual Awakening. All of them provide a resounding resource for people who are seeking to enhance their spirituality.

Even Reverend Ted’s voice offers a soothing counterpoint to the barrage of modern life. Deep, thoughtful and completely unhurried, it resonates with the kind of knowing and grace handed down by the ancients. And for those looking to align themselves with age-old wisdom about our subject, Reverend Ted offers Deep Prayer: The Practice and Power of Spiritual Encounter.

“Deep prayer can be defined as alert receptivity,” says the Reverend. “It is not techniques or methodologies; not magic or special gifts — it is purity of intention. Pure motivation in our hearts that leads us into this wonder and mystery.”

Indeed. Reverend Ted aims to keep us “in line with the miracle seekers” of history. Those who’ve found that “God consciousness is the essence.” And those who know that deep prayer is “not of the mind, but of the heart.”

The source of deep prayer, insists Reverend Ted, is nothing less than “pure faith.”

Healing Properties has long been a proponent of deep prayer. In fact, it’s been an integral part of our program since we opened our doors back in 2001. We know full well prayer’s capacity to heal, and to help, oneself, as well as others. We also know the wisdom provided by that still small voice inside of us all.

Bhuddini took time to point out Reverend Ted’s “Deep Prayer” position (and clip) on the spiritual-seeking Bliss Blog. We’d like to use the salute to take us out — and to thank the very Reverend Ted Nottingham for taking us up, up and away!

“In the evolution of humanity’s spiritual awareness,” notes Nottingham, “we find that prayer becomes something very different. The great sages of all traditions reveal in their own lives that prayer is ultimately a uniting of human consciousness with a vaster life that they call divine. We can therefore trace the evolution of prayer from petition (or) asking, to intercession (praying for others), to contemplation – silence transforming prayer.”

“We are then,” he observes, “lifted out of the mundane consciousness which we mistakenly take for reality and experience; the freedom and insight, and capacity to love, that transcends our ordinary way of being. The transforming power of prayer deals with a more attuned awareness, an exulted consciousness of the present moment, and a liberation from the psychological baggage that blocks our true identity. Consciousness is energy,” he points out, “and with a little discernment of our inner lives, we can easily notice the difference in quality of our various states.”

(Above photo courtesy pxfuel via Creative Commons. Thank you.)