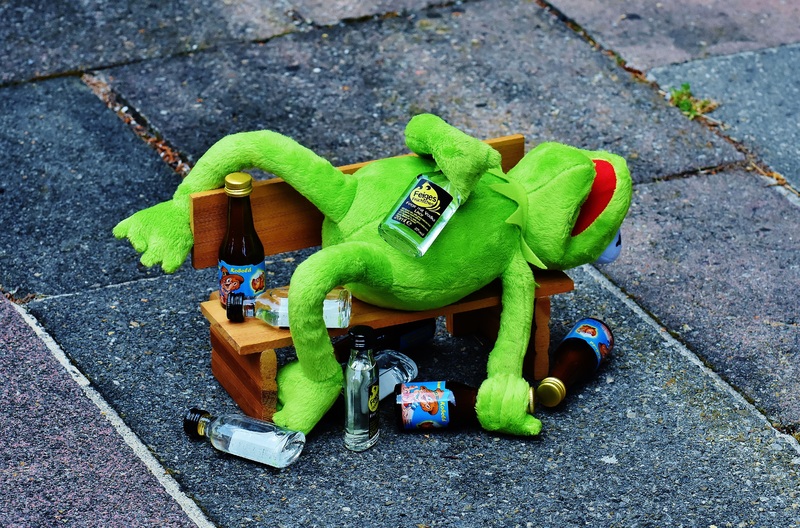 One guy drank a drink and then kept drinking. He subsequently got drunk. Real drunk. As in mean, ugly, kicked out of the bar and arrested drunk. The next day he remembered nothing. Not the black eye. Not the jail cell. He didn’t even remember the fight with the cop. Drink. Drank. Drunk.

Another guy drank a drink and became a drunk. He spent one half of his life looking for an excuse to drink. He spent the other half following through. Somehow though he never got drunk. Ever. Drink. Drank. Drunk.

What Makes an Alcoholic?

If you said both drinkers need treatment, you’d probably be right. You could also be wrong. What if the guy who got arrested was just on a binge? What if it was his first time drinking? And what if it never happened again? Maybe he binges once or twice a year. Does that make him an alcoholic?

Yeah, we know. All that speculation is, well, questionable. If it was the guy’s first binge though, we’d hope it would also be his last. Otherwise he’s in for a real wake-up. Then again, anyone above college age who’d drink to that degree probably needs a real wake-up.

That second guy is another enigma. Sure, he drank too much. Way too much. He also loved drink too much. And yet he never got drunk. He’s obviously an alcoholic. Yet, he’s a functioning alcoholic. How long will he be able to function? That’s the million dollar question. All that drink will eventually take a toll, whether he’s drunk or not. And when that bell does toll, it just may be too loud for his body to handle.

The National Institute on Alcohol and Alcoholism (NIAA) lists a third drinking type — the moderate. So those will be the three we’ll explore in Drink Drank Drunk.

“I limit myself to two drinks in one sitting,” they’ll say with smug superiority. “And it’s never more than three times a week.” Then they’ll reach around and pat themselves on the back.

You know the type. What you might not know is just how eagerly these so-called moderates look forward to those carefully-monitored engagements. Heck, many moderates are climbing the proverbial walls between each two-drink sitting — distracted, irritable, obsessed.

Okay, so maybe there are more real moderates than not. And perhaps that obsession with monitoring and calibration is simply because they’re obsessive-compulsives. After all, some folks just like living heavily-regimented lives. They may also be epicures. They like drink for the way it complements food, instead of the way it affects their head.

Truthfully, you don’t know how honest any moderate is being. Everyone’s word deserves to be taken at face value — until it doesn’t. When questions arise, ask them. Would such an obsessive really want to talk about it? Could he be obsessing over his habit or his story? If the moderate’s constantly blabbing about his moderation, he’s probably concerned with peoples’ impression. If the man’s concerned with peoples’ impression, then he’s got a problem. At the very least, he’s not fully comfortable in his own skin.

What happens when drink hits drank? Was there a major change from one to the other? Did the drinker turn mean and nasty or more happy-go-lucky? Did he end up drunk? How drunk?

Not every binge drinker winds up on the floor or in the hospital ward. Some drinkers can hit binge capacity at lunch and then easily ride out the rest of the day. Others can’t and don’t. Unlike moderates though, binge drinkers rarely leave any gray area. And you can generally spot ’em a mile away.

The Centers for Disease Control says binge drinking is a serious but preventable public health problem. The CDC also says it’s the most common, costly, and deadly pattern of excessive alcohol use in the United States.

And while the CDC says “most people who binge drink do not have a severe alcohol use disorder,” they also warn that it’s “associated with an increased risk of AUD.” The CDC further warns that “binge drinking is a harmful risk behavior associated with serious injuries and multiple diseases.”

In other words: be very wary. In fact, be more than very wary. Why? Well, in the first place, it can kill you. “About 2300 people die each year from alcohol poisoning,” says the CDC. And we can’t imagine those are very pleasant deaths. There’s more though. Much more. Just take a quick look at binge drinking’s risk list.

Binge drinking can cause:

Binge drinking also costs — lots. The individual, as well as the country. A CDC study found excessive drinking is a big drain on the American economy. Binge drinking apparently costs most of all.

Excessive drinking, including binge drinking, cost the United States $249 billion, or $2.05 per drink. These costs were from lost work productivity, health care expenditures, criminal justice costs, and other expenses. Binge drinking accounted for 77% of these costs, or $191 billion.

And that was from 2010! Throw COVID into the equation and there’s no telling how much the costs have risen. Talk about drink drank drunk.

Did you get drunk and then become a drunk? Or did you become a drunk who just liked to get drunk? Did you ever drink to get drunk? Did you ever believe drinking would make you a drunk? Maybe? Maybe not? There are all kinds of ways to couch the question of heavy drinking, and not one of them addresses the obvious: heavy drinking makes you a drunk, whether you’re actually drunk or not.

The CDC defines man’s heavy or excessive drinking as consuming 15 drinks or more per week. For women it’s eight drinks or more a week. The CDC also teamed with the Substance Abuse and Mental Health Service Administration (SAMHSA) and found that while around 70% of all American adults at least occasionally drink, about 30% report excessive drinking. They also said 3.5% have alcohol use disorder.

What this tag-team study also found was that though nearly one-third of American adults were excessive or heavy drinkers, only 10% had AUD and were therefore considered alcoholics. They considered the rest to be “Almost Alcoholics.” That doesn’t mean drinking didn’t cause trouble though. Far from it.

“There are many people in the almost alcoholic zone who are having alcohol-related problems with their health, their relationships and social lives, and even their work, but who don’t connect the dots between these problems and their drinking,” says Joseph Nowinski, who coincidentally is co-author (with Robert Doyle) of Almost Alcoholic (Hazelden Publishing). “These people dismiss the possibility of being an alcoholic — and they truly don’t qualify under current definitions — but may need to take a step back to look at how drinking is affecting their lives.”

That was back in 2014. We trust those “definitions” have since been brought up to date. We also trust that all those so-called Almost Alcoholics got to step back and look at how excessive drinking was affecting their lives.

As for the term “almost alcoholic,” well, we don’t know. We’ve never met one. In fact, we were quite surprised by the term. No, we don’t doubt its originators, or their book. They obviously mean well. Nevertheless, it’s highly unlikely we’ll ever again turn to the term. Why? We don’t believe in in-between. You either have a disease or you don’t. Simple as that.

It’d be great though if we could eliminate the bookends in Drink Drank Drunk. Forget both the drink and the drunk and leave everything in the past. After all, neither having a drink nor getting drunk rate on the sobriety scale. That past tense drank however can be a doozy. Yep, being able to claim your drinking days are over is one helluva thing. Whether it’s a day or a decade. It also makes for one helluva life. Think about it. No more binging. No more excess. And no more unsightly and unseemly episodes. Better yet, not only will there be no more Drink or Drunk, but Drank will become a badge of honor rather than a reason for shame and apology. Sure, you once drank. Now you don’t. As simple and as deep as that.

Healing Properties salutes all those who’ve gotten the jump on Drink Drank Drunk. We also welcome the soon-to-be hurdlers. After two full decades helping men get sober, we know every day without alcohol is another day that’s solely your own. And you deserve to own each and every day you’ve got coming.

What about you? Have you gotten the jump on Drink Drank Drunk? Are you looking to hurdle? We can help, you know. In fact, it would be an honor. Just give us a ring. You’ll be back pocketing your days in no time.