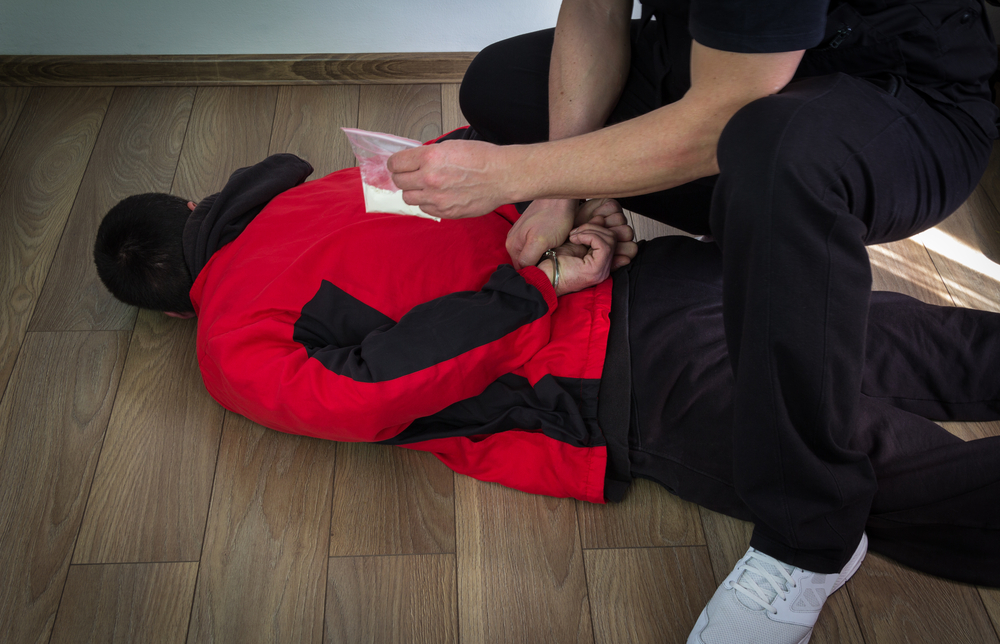 It’s time for our periodic look at some of this nation’s more colorful drug busts. Like our look at DEA meth busts, the subsequent rundown, or our Recovery Boot Camp colleagues’ own one-day-take, the list is riddled with people who not only were caught driving dirty, but they were also caught driving drugged and/or drunk. It also includes a pair of their presumed relatives, who got caught after a drunk and dirty driver crashed right outside their home. Another 43 drug-driven citizens fell afoul of John Law after two rather extensive investigations.

Okay, so maybe none of these drug busts equal the astonishing $200 million worth of meth recently seized in Laos. Then again, what does? That not only happened to be the largest meth bust in Asia’s history, but it happened in one of the world’s most prominent drug-production corridors. Whatever the case, we’d hate to see what becomes of the driver of the beer truck that was hauling all that meth.

In other words, whether a gram or a ton, getting caught is no fun. And neither is the drug game itself. It’s even less fun when you lose what’s left of your freedom. But you knew that already. What you might not have known is how the following folks found out their own play time was over.

That’s like doubling up the dumb and then asking for more.
Anonymous

Let’s see: Driving while impaired? Check. Driving with drugs? Double check. Driving with an unlicensed firearm? Check again. But 35-year-old, Hazard, Kentucky resident Justin Kelley wasn’t just carrying drugs and a gun while driving high in Salem, Indiana. No, he was driving so high that he passed out at a gas station. And that’s just where the Indiana State Police found him too, slumped across the bed of his pickup truck.

When the keen-eyed cops also found around 3.5 grams of suspected heroin, syringes, drug paraphernalia, and a Sig Sauer assault-style rifle, they put on the bracelets. Then, when they found out that Kelley was a convicted felon, they kept them there.

The good folks at Louisville’s WDRB (from whom we got this story) apparently weren’t able to ask Kelley just what (or if) he was thinking.

When officers from the Easton Police Department first found 24-year-old Amon Stowers, the Grasonville, Maryland resident was standing in the middle of the road by a wrecked vehicle. His wrecked vehicle. When the cops then found stolen plates on the car, they put him in cuffs. Then the police also discovered that Stowers had in his possession a loaded 9mm semi-automatic handgun, approximately 157 grams of marijuana, a digital scale, and a pint bottle containing promethazine hydrochloride syrup. Needless to say, the EPD made sure he proceeded directly to jail.

We don’t know whether or not 47ABC (WMDT) reporter Sarah Ash (who wrote the original story) was on hand to ask Stowers why he neglected to remove the stolen license plate and ditch the gun and the drugs before police arrived, but we’re sure he’s kicking himself for not doing so. Perhaps he can use his upcoming downtime to learn how to exercise basic common sense.

It’s 10 o’clock at night. You’ve got scales, a stack of cash and over 2.2 pounds of pot in your car. Is this really the proper time to spark up a blunt? How about to run a stop sign? No, you say? On both counts? Well, 23-year-old Keyondre Purvis apparently thinks otherwise. Because he did spark up a blunt and he did run a stop sign and — you guessed it — he was pulled over by the police.

As you might suspect, Purvis is now sitting in jail. And the kkeen-eyed Laurinburg Police Department has 2.2 pounds of pot, scales and $1,135 in cash booked in evidence. The cops also found a 40 caliber handgun, but since it wasn’t listed on the arrest record we’re guessing it was licensed.

Anyway, this all happened in Laurinburg, Maryland. We got the news from Laurinburg Exchange Staff Reporter Katelin Gandee. When all was said and done, the LPD charged Purvis with possession with intent to sell and deliver marijuana, felony possession of marijuana, maintaining a vehicle for the purposes of drug sale, three counts of possession of drug paraphernalia, failing to stop at a duly erected stop sign and driving while license revoked.

The Laurel Hill, Maryland man was then given a $12,000 bond and a bunk in the Scotland County Jail.

Of course, drug busts aren’t just limited to those who were foolishly driving dirty. Often they occur after a lengthy investigation. Quite often, in fact. When that happens, authorities usually arrest more than one person too. Such are the following incidents.

Another crash. Another pickup truck. Only this time the driver was nowhere to be found. A known drug spot was close by though. Suspiciously close. And the Washington County Sheriff’s Office thought the bad guy just might have run inside there to hide. Since the property was heavily-fortified, the Sheriffs called in SWAT. Then they awaited a warrant.

The subsequent hours-long search uncovered heroin, meth and roughly a dozen guns. It also uncovered 21-year-old Kyler Pullins and 62-year-old Carolyn Allen, both of whom had outstanding warrants for failure to appear in court, as well as six other people. However, the crashed car’s driver — believed to be 36-year-old Damion Clowdus — was nowhere to be seen.

Clowdus has an extensive rap sheet dating back to 1998, with a slew of charges ranging from identity theft and burglary to child neglect and unauthorized use of a vehicle, so he’ll likely run into authorities again real soon. When he does, it’s quite likely that KOIN 6 News reporters Cambrie Caldwell and Jenny Young will once again be there to report the story.

No driving dirty here either, though one suspected DUI stop did net cops various quantities of methamphetamine, heroin, pills and stolen property, as well as a loaded handgun and a shortened barrel shotgun. It also put a nail in the lid of seven theoretical coffins.

For some of the convicted, those coffins may prove to be anything but theoretical.

According to the WALB News Team, they are:

The rather extensive case was put together by the U.S. Attorney’s Office for the Middle District of Georgia. It was made possible by investigations from the FBI, U.S. Marshals Service, DEA, ATF, the Georgia Bureau of Investigation, the Lee County Sheriff’s Office and the Randolph County Sheriff’s Office. It involved drugs and gun trafficking in six Southwest Georgia motels. And, as you see, it sparked some very serious sentences.

“These sentences wrap up a combined effort by local, state, and federal law enforcement partners to remove a double-edged threat of drugs and guns circulating in the Albany community,” said Chris Hacker, Special Agent in Charge of FBI Atlanta. “The results of this diligent investigation send a message to criminals that their life choices have very serious consequences.”

Special Agent Hacker is not lying.

Here’s another rather extensive case; this from WITN reporter Conrad Hoyt. It’s called Operation Bad Candy. And it was put together by the Craven County Sheriff’s Office over a full ten weeks. In the end, 36 people were arrested on felony charges involving heroin, cocaine, fentanyl, methamphetamine, LSD and illegal guns.

Among those arrested were Jackie Tripp, Kevin Copper, Sherrick Griggs, Melissa McRoy, Jackie Tripp, Malcolm Tripp, Benjamin Ipock, Mark Gehrig and Blayne Thomas. All of the aforementioned were charged with felony possession with intent to manufacture/sell/deliver heroin or other controlled substances, as well as other charges. Most of the rest of the arrests were for felony possession.

It seems neighbors were sick and tired of the traffic at a certain drug house or two and decided to contact the authorities. No, not one nosy neighbor or two. But a whole neighborhood of neighbors. And you can’t run roughshod over a neighborhood.

“I cannot over emphasis my appreciation for those citizens who reach out to us and provide information regarding these illegal activities,” said Craven County Sheriff Chip Hughes. “There are resources for those with addictions who want help. However we will not tolerate the continued illegal use and sale of illegal drugs, and the damage it causes to our communities.”

These arrests prove it.

What’s in a Drug Bust?

Healing Properties periodically publishes details of drug busts simply in order to remind folks about the cop cars, the handcuffs and the jail cells; the risks to life, limb and freedom. In other words, everything you’re not missing. All of the above-mentioned are either in jail (or prison) or on their way back to jail (or prison), some for as long as 30 years. You do not want to be in their company. Really.

If you stay sober, you won’t be. Because you’ll be thinking too clearly. Way too clearly. You won’t be out driving dirty. You won’t even want to be. You’ll have far more fulfilling things to do. And not one of those things will get you locked up or killed either. Imagine the relief.

So yeah. Use the above as a cautionary tale. A sort of There but for the Grace of God… And be grateful you no longer have to live like that.

What’s that? You’re still struggling? Well, give us a call. Please. We’ll sort you out. If we can’t, we’ll put you with someone who can. Really. There’s no reason to by ripping and running. Not anymore. None whatsoever.