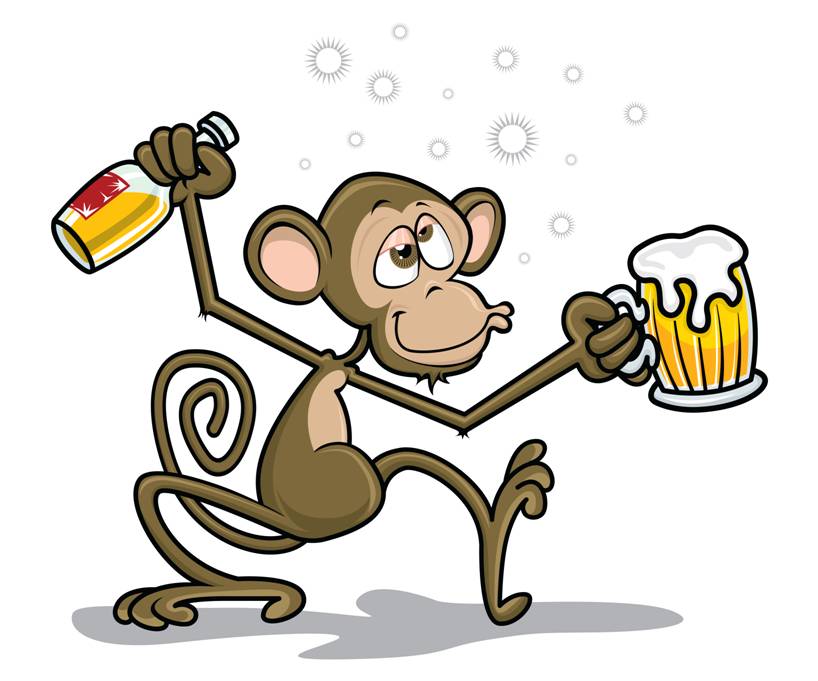 Can a Drunk Monkey Save the Day?

Sure, we know. There have been plenty of days when you felt like a drunk monkey, swinging from branch to branch just to get your paws on a drink. But did you ever for one moment think some drunk monkey might end up saving the day? How ’bout a monkey drunk?

Well, Sky News just reported on some research that may make truth of that thought. It involves alcoholic vervet monkeys. Seems this particular species has an inordinate fondness for drink. In fact, vervet monkeys are so fond of spirits that they’ll sneak up and steal cocktails right from the drinker.

Drunk as a Monkey Drunk

How do we know? Well, two reasons really. The first involves some seriously promising research conducted by some seriously keen scientists. The second springs from a delightfully-insightful, KQED-supplied BBC Studios clip.

Let’s start with the mash-up…

The smile-generating clip shows some super sneaky monkeys slipping away with tropical cocktails on a tourist-strewn beach in St. Kitts. Like their human counterparts, these partying monkeys appear to favor piña coladas and margaritas. And, like their human counterparts, some favor them a bit too much. “Most [monkeys] drink in moderation [though],” says the clip. “Twelve percent are steady drinkers and 5% drink to the last drop.” Still others are just as content with an ice cold soft drink.

The monkeys’ taste for alcohol comes from fermented sugarcane left behind after the harvests. Their habit has been helped along by an abundance of careless tourists. The falling off of benches and tables was apparently acquired on their own.

Whatever the case, the point is to align monkey and human behaviors, and the keen folks at BBC Studios provide a charming way to do just that.

Treating a World of the Drunk Monkeys — and Monkey Drunks

“Scientists have developed a treatment that reduced boozing by 50% in alcoholic vervet monkeys,” reads the lead, “potentially offering a solution for humans with drinking problems.”

Let’s read that lead again. Scientists have developed a treatment. Not wished for, but DEVELOPED. And that treatment reduced boozing by 50%. Not might reduce or could reduce or should reduce in the merry month of May if sparrows are singing “What a Wonderful World.” No, REDUCED. Past tense. Period. That means the treatment worked. More, it worked for fully half of its targets. FIFTY PERCENT. So we do indeed have a potential solution for humans with drinking problems. We’ve also potentially got something that would help ease a whole lot of the world’s pain and suffering.

The Numbers Boggle the Mind

A 2019 National Survey on Drug Use and Health (NSDUH) found that nearly 15 million Americans (5.3%) ages 12 and older suffered from Alcohol Use Disorder (AUD). That’s almost 15 million sisters and brothers, daughters and sons, mothers and fathers and aunts and uncles suffering from some serious pain. That’s also almost 15 million families suffering right along with them. When you include who knows how many friends, colleagues, partners and employers — none of whom are immune to AUD’s commensurate effects — the amount of hurt becomes mind-boggling.

Things aren’t any better outside the States either. In some countries, they’re even worse. Our World in Data* currently estimates 107 million global AUD sufferers. That’s bound to be a conservative estimate though, even with Our World’s precision-driven acuity.

Heck, even if the total is half that (highly unlikely), we’re still talking over 50 million people sidelined by pain. We’re also talking approximately five times that many in some way sharing in that suffering. If the estimate is half again as much (much more likely), we’re looking at around 150 million world citizens in various stages of severe disrepair. Crunch the numbers into cold, hard economics and you get a population larger than Japan in need of resources equal to the GDPs of nearly any three Eastern European countries. Well, equal enough to bankrupt the three anyway — all at once.

Cold, warm or otherwise, it’s far too many, suffering far too much, for far too long.

*Our World in Data is a rather remarkable project of the Global Change Data Lab, a British charity founded by social historian and development economist Max Roser. It’s based at the University of Oxford, where Roser serves as a research director in economics. That means as bona fide as bona fide gets. It also means the project will — and does — indeed help tackle the world’s largest problems.

It’s in the Research

A propensity for drink isn’t the only reason vervet monkeys are key for scientists investigating alcoholism — the species also has similar inner workings to us humans. That’s probably why (how?) scientists found out “an analogue to a hormone successfully suppresses drinking” in the critters. The hormone is called fibroblast growth factor 21 (FGF21). Wiki says FGF family members “possess broad mitogenic and cell survival activities.” It also says they’re “involved in a variety of biological processes including embryonic development, cell growth, morphogenesis, tissue repair, tumor growth and invasion.”

Wiki doesn’t say whether those cell survival activities also include regulating alcohol consumption, but that’s apparently true. It’s apparent they’ve had quite some time to do so too.

In other words, monkeys have been becoming drunks for ages. Considering too much drink can make a monkey mad, bad and dangerous to know (just like you know whats), “it is not surprising that numerous physiological systems have evolved to sense and regulate alcohol consumption.”

This physiological history gave University of Iowa and University of Copenhagen researchers a way in, as well as a target. In short order these bright minds “developed a new way to therapeutically target the neural pathways that contribute to how mammals regulate their alcohol consumption.”

As mentioned, there are drunk monkeys, and there are monkey drunks. Given the chance, the monkey drunks will always drink to excess. Good that they do too. Because their consistent imbibing offers “a pre-clinical model of alcohol drinking that may more closely reflect aspects of harmful drinking in humans.”

So researchers took 20 of these monkey drunks and gave them access to booze for four hours a day, four days straight. After a baseline was established, they split the monkeys into two groups. One of the groups received a placebo; the other received the new FGF21 analogue treatment.

The monkeys who received the therapeutic treatment drank 50% less than they did at their baseline. That indicated the analogue can “robustly suppress alcohol consumption.”

Dr. Kyle Flippo, of the University of Iowa’s Carver College of Medicine, said: “Our results provide a mechanism for a liver-to-brain endocrine feedback loop that presumably functions to protect the liver from damage.”

Then the good doctor added what we all wanted to hear: This indicates “a potential treatment option against alcohol-use disorder (AUD).”

When a Monkey is No Longer Driven to Drink

While Naltrexone might on occasion help prevent heavy boozers from going off on a binge and Antabuse will make a drinker physically ill if s/he imbibes, we really don’t yet have an effective medicine for alcoholism. In fact, you could say spirituality (especially the kind advocated by Alcoholics Anonymous) has thus far proven to be our most potent treatment.

That’s not to say it would do away with the need for spirituality’s inherent benefits. Whether you get centered via AA’s 12 Steps, Buddhism’s Four Noble Truths, Gnosticism’s Divine Spark or something else entirely, the need won’t evaporate with any liver treatment. That applies even if this brave new method does prove to be something of a miracle cure. If anything, a solid spirituality will help the miracle take hold.

What’s most promising about this targeted method (if we’re understanding it correctly) is that it’ll take you off alcoholism’s course entirely. You won’t drink because you’ll no longer be driven to drink. In fact, that road will cease even to be an option.

Alcoholics have been told there’s no exit since Sartre wrote the play. Consequently we’d largely stopped looking for a sign. When we did dare peek, there was nothing but Dead End. Sure, that may have been ol’ Jean Paul’s original idea. It doesn’t however have to be our finale. So raise your eyes, scope out the horizon and hit your turn signal, because this new treatment could be the off-ramp we’ve sought all along.

Healing Properties asks: What about you? Tired of being a drunk monkey? In danger of becoming a drunk monkey drunk? Ready to do something about it? Options do exist, you know. Even if the miracle cure has yet to arrive. Remember, many thousands of drunks have stopped drinking simply by opting for camaraderie and spirituality (AA and otherwise). You could easily join them. Give us a ring. We’ll get you sorted. Just as we have for thousands of other men over the last 20 years.