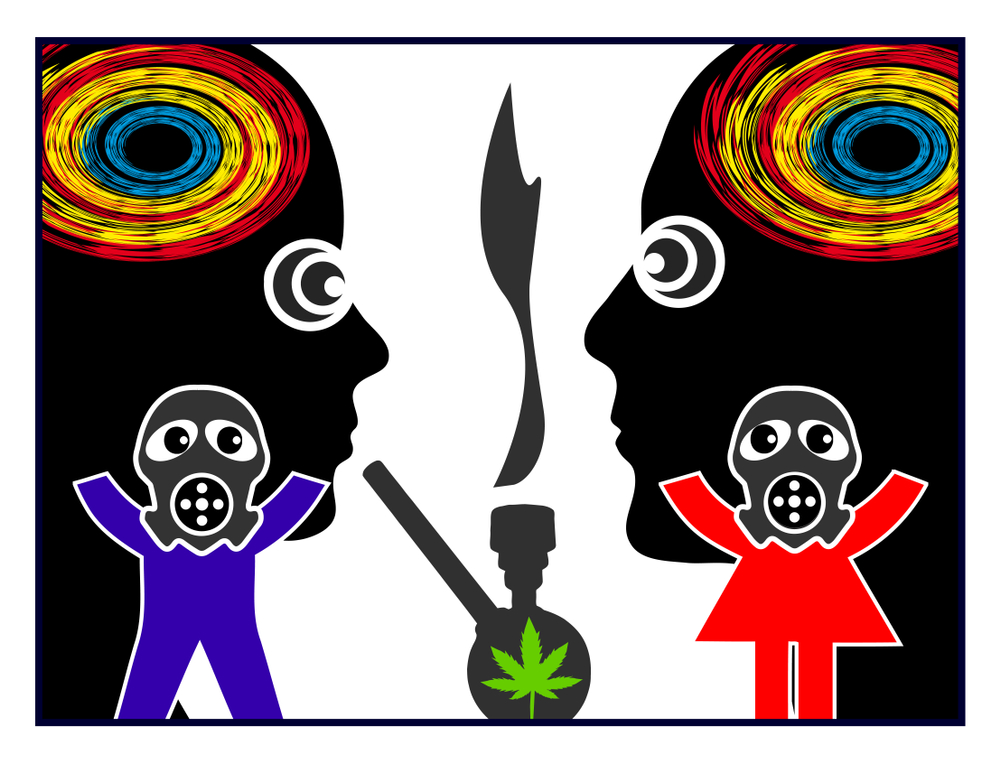 Everything You Knew About a Contact High is Wrong

Contrary to popular opinion, you don’t get a contact high from being in a roomful of pot-smoking people. Not if the room’s at all ventilated anyway. And it’s very, very rare at that. There’s just not enough THC making it into your bloodstream. But even if you did feel the effects of the pot smoke, it wouldn’t be called a “contact high.” No foolin.’ A contact high is a whole ‘nother thing. It’s not a good thing either. Not even a little.

Seems we’ve been using the term “contact high” wrong all these years. That phenomenon which comes about from being in a roomful of pot smoking is actually called “hotboxing.” It’s meant to enhance the high of the participants not coerce a high from the unsuspecting. (Yeah, we know. We also thought hotboxing meant fast-puffing cigarettes until the filter got hot. But apparently that was wrong too.)

We can now set the record straight:

Hotboxing means “smoking marijuana or hashish in a small enclosed area, causing it to fill with smoke in order to maximize the effect.” (thanks Wiki!) And while non-participants may get a little buzz from the phenomenon, the room must be unventilated and the smoke more than a little considerable.

In fact, a team of seven researchers even studied the phenomenon and then published the results with the National Institutes of Health (NIH). It was an esteemed team too, consisting of Evan S. Herrmann, Edward J Cone, George E. Bigelow and Ryan Vandrey from the Johns Hopkins Behavioral Pharmacology Research Unit, SAMHSA’s Charles LoDico and Ron Flegel, and the Research Triangle Institute’s John M. Mitchell. And it “examined the physiological, subjective, and behavioral/cognitive effects of secondhand cannabis exposure, and the influence of room ventilation on these effects.” Why? Well, quite simply because “cannabis is the most widely used illicit drug.” And though “many individuals are incidentally exposed to secondhand cannabis smoke, little is known about the effects of this exposure.”

The researchers put non-cannabis-using individuals into a specially constructed chamber with six pot smokers for one hour. The first time the chamber was unventilated; the second time it was properly ventilated. In the first instance, secondhand cannabis smoke exposure “produced detectable cannabinoid levels in blood and urine, minor increases in heart rate, mild to moderate self-reported sedative drug effects, and impaired performance on the Digit Symbol Substitution Task (DSST).” In fact, some of the levels were high enough to produce positive urine test results.

Exposure under ventilated conditions, however, “resulted in much lower blood cannabinoid levels.” Furthermore, “it did not produce sedative drug effects, impairments in performance, or positive urine screen results.”

So, forget using “secondhand smoke” as an excuse the next time you test positive for cannabis. Unless, that is, you were in a highly unventilated room under relatively extreme conditions. You may want to be able to prove it too.

Now that we’ve gotten hotboxing out of the way, let’s get to the proper use of the term contact high. Here’s how Wiki spells it out:

A contact high is a psychological phenomenon that occurs in otherwise sober people and animals who come into contact with someone who is under the influence of recreational drugs. It involves a supposed transfer of the physiological state of intoxication. [emphasis added]

Back in the ’70s, some folks referred to it as “a psychogenic ‘trip’ one can take simply by being close to somebody while he or she is on drugs.” Meaning of course that it’s origin is psychological rather than physical.

It’s also highly empathetic. Alexander Shulgin‘s deliciously controversial PiHKAL documents what happens to a placebo-taking person in a room full of people who were under the influence of hallucinogens. The participant later wrote that he had “absorbed the ambience of the folks who had actually imbibed the material.” In other words, he felt as if he were also tripping. We don’t know whether that was on account of the placebo or due to empathetic reactivity (severe empathy). Perhaps it was a combination of both. Whatever the case, he did experience a contact high.

A contact high can occur for other reasons too. One of the more troubling instances concerns what we’ll call “Mommy’s Medicine.” This phenomenon occurs when a family’s well-being is directly affected by the drug-taking habits of one of its members. It’s not limited to mothers of course (the meds could also be for daddy or grandma or grandpa); nor is it restricted to drugs (alcohol is also a prime influencer). But its effects are pronounced.

Imagine an addicted mom and her houseful of kids. Now imagine that mom without her “medicine.” It could be prescription pain pills or alcohol; it could also be something illicit. Whatever it is, the children know the family’s harmony depends upon mom getting her meds. Once she’s properly medicated, the kids are as happy as their parent. It’s a perfect example of transferring the physiological state of intoxication. It could also be considered child endangerment.

The same could be applied to anyone entering the presence of a group of drunk or stoned people. If the person doesn’t imbibe, the brain will find another way to “catch up” to the group. Otherwise the person will become too uncomfortable to stick around. That psychological effect can also be called a “contact high.”

Now that you know the literal difference between contact high and hotboxing, you’re one up on everyone else. No, it probably doesn’t much matter in the overall scheme of things. The erroneous use of “contact high” is probably too embedded to change back anyway. Nevertheless, it’s good to be in the know.

It’s also good to know the hazards; specifically those mentioned in “mommy’s medicine” above. Too many families are hanging by the thread of a primary member’s substance abuse. And every time that thread threatens to sever, the entire family is at real risk. It’s a daily foreboding, held at bay by drugs and alcohol, and it can terrorize children for the rest of their lives.

Healing Properties asks that you take careful stock of your family. And to be especially mindful of the impact your actions have on your children or spouses. We also ask that you seek help if you’re having any kind of negative effect. Even the sober can do things that have detrimental effects on the family. And there’s no shame in reaching out to do better.

Yes, help is out there. All you’ve got to do is please give us a call.