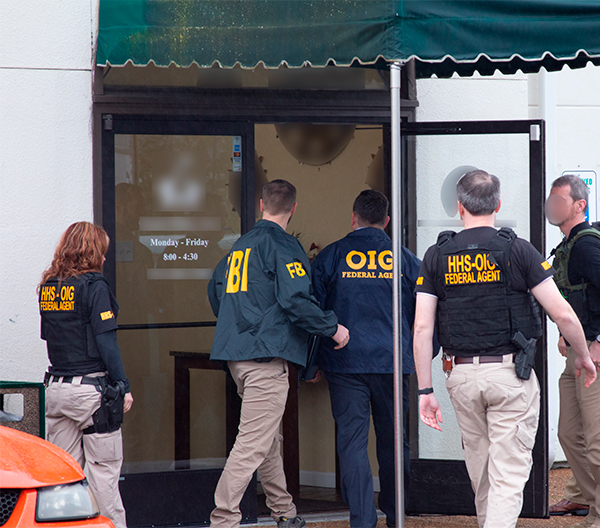 The opioid drug ring stretched across seven states, including Pennsylvania, Ohio, Kentucky and Tennessee. It also included 53 medical professionals, who wrote a combined 350,000 prescriptions for an astonishing 32 million pain pills.

Among those allegedly malfeasant practitioners is the so-called “Rock Doc,” who, say Feds, “allegedly prescribed powerful and dangerous combinations of opioids and benzodiazepines, sometimes in exchange for sexual favors.” How many pills did the wanna be Reality TV star prescribe over the last three years? Nearly 1.5 million, that’s how many. And the bulk of those prescribed pills were hydrocodone (500,000), oxycodone (300,000) and benzodiazepine (600,000). That’s a whole lot of Vicodin, OxyContin and Benzos.

But Tennessee’s “Rock Doc” wasn’t the only bad actor. Not even close. Another Volunteer State doctor allegedly prescribed approximately 4.2 million opioid pills. And a Dayton, Ohio pharmacy itself prescribed over 1.75 million opioid pills in a two-year period and became known as a bona fide “pill mill.”
.
That’s not all. Others were arrested for filling fraudulent prescriptions, prescribing opioids to known addicts, and — get this! — providing Facebook Friends with opioid prescriptions based on Messenger requests. Really.

Seems Cartel members and corner boys aren’t the only ones who know how to successfully deal drugs.

Cartel members and corner boys aren’t the only targets of law enforcement officials either. Not anymore anyway. And ARPO aims to prove it.

ARPO, aka the Appalachian Regional Prescription Opioid Strike Force, is a multi-agency task force consisting of members of both the Justice Department and the Department of Health and Human Services, as well as agents from the Federal Bureau of Investigation (FBI) and Drug Enforcement Administration (DEA). In other words, ARPO’s got some serious Fed muscle. And this massive opioid drug ring takedown proves it’s not afraid to use it.

Indeed, ARPO’s goal isn’t just getting illicit opioid off the streets; it’s locking up the dealers who made Appalachia one of the most opioid-ravaged regions of the country.

“The ARPO strike force is going after doctors who act like drug dealers,” said FBI Criminal Investigative Division Health Care Fraud Unit Chief Steven Blaum. “Our focus is on the doctors because the sheer volume of pills they can prescribe can have a significant impact on their communities in terms of access to illicit opioids. By removing just one bad doctor, we can stop the addiction cycle before it starts.”

It’s no mystery why ARPO was tasked with, set in and named after Appalachia.

“Opioid misuse and abuse is an insidious epidemic, created in large part, by the over-prescribing of potent opioids nationwide,” said the DEA’s John Martin. “Unfortunately, Appalachia is at the center. Today’s announcement sends a clear message that investigations involving diversion of prescription drugs have been, and continue to be, a priority.”

That is to say, prescription opioid drug kingpins better watch out!

We at Healing Properties would like to applaud the Appalachian Regional Prescription Opioid Strike Force for taking down one of America’s largest opioid drug rings. And we hope their concerted efforts continue till all the federally-funded drug dealers are taken off the streets and put behind bars. We’re especially encouraged by ARPO’s targeting of bad acting medical professionals, rather than the usual suspects. While we agree that Cartel members and corner boys play a significant part in the continuing opioid crisis, neither of their roles would be nearly as significant without the over-prescribing of opioids. That the Feds are willing to recognize this is cause for serious applause.

We’d also like to recognize the victims of this over-prescribing frenzy. That is, the addicts themselves, as well as the families and communities that have been ravaged by addiction. And we wholeheartedly encourage the Feds to put as much money and muscle into addiction treatment funding. We’ve seen what successful addiction treatment can do for everyone impacted by substance abuse. And we won’t stop until everyone gets the addiction treatment they need. We’d like to believe the government stands behind us all.

If You Need Help

If you or your loved one is experiencing problems with addiction, please give us a call. We’re here to help.