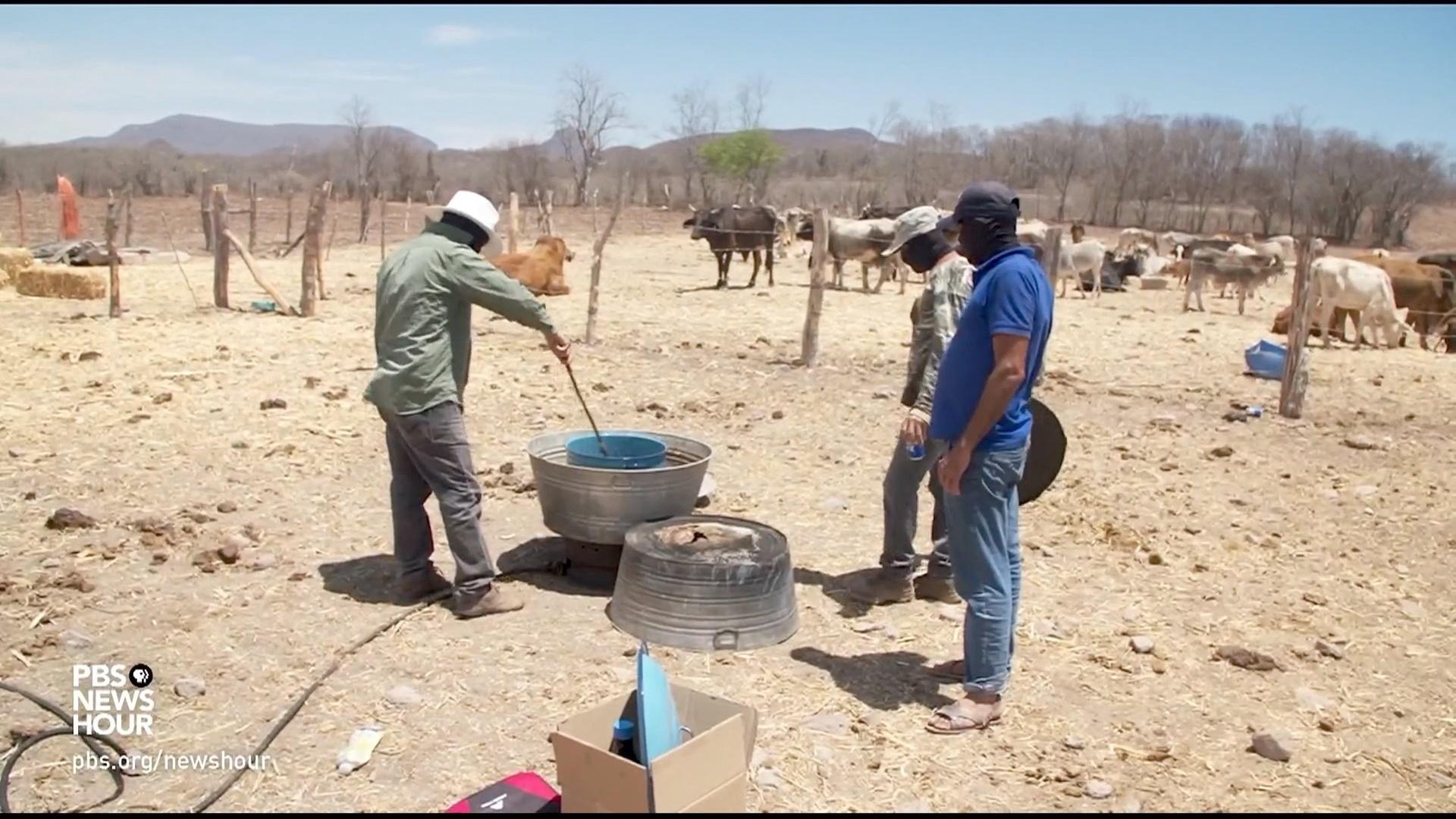 The Fentanyl Pipeline: It’s Even Deadlier Than You Think

The Fentanyl Pipeline begins in the rugged farmlands located in the Western Mexican state of Sinaloa. Unlike traditional pipelines however, there are no valves or gauges or hard-hatted crews running around with clipboards and wrenches. And why would there be? There isn’t even any pipe. There are a few farmless farmers though, as well as an open fire, a large pot, a large knife, a larger spoon, some packing materials, a scale and maybe an armed guard or two. Just enough people and materiel to outfit a makeshift drug lab in the middle of the proverbial nowhere.

We know all this because PBS Newshour sent ace conflict reporter Monica Villamizar down to uncover all this. The Emmy Award-winner also uncovered the fact that this makeshift lab steadily produces 11-pound packages of fentanyl, and that each is worth $15,000 just up the road in Culiacan. We also know that very same package will sell for $100,000 once it hits the United States. Coincidentally enough, 100,000 happens to be the number of overdose deaths the U.S. suffered between the last two Aprils.

The drug-related deaths don’t start here in the U.S. of course. They don’t actually start at the labs either. No, drug-related deaths begin in the towns and hamlets surrounding the labs, where the cartel holds dominant sway and any naysayer is met with swift and merciless retribution. Only then do the deaths begin to branch out. And yes, often to right there around the lab fire, where even a quick whiff of the wicked brew can kill a cook in a matter of seconds. Then they continue, throughout the Fentanyl Pipeline, where drivers and packagers and re-packagers and smugglers and border patrol agents and unwitting emigrants and the coyotes who corral them risk literal life and limb along each and every section of its route.

American officials, naturally, are more concerned with the number of fatalities at the end of the Fentanyl Pipeline. Then again, they really don’t have much choice. Not with a six-digit death rate and an increasingly clamorous citizenry. And while “only” around two-thirds of those 100,000+ drug overdose deaths can be directly attributed to fentanyl, it’s still an obscene amount of carnage. Incredibly obscene. Especially when you consider the figure also doesn’t take into consideration all the other deaths along the pipeline. Villamizar and PBS Newshour took it into consideration though. And, as intimated above, that consideration ended up being considerably alarming.

Take, for instance, the farmless farmers. In Sinaloa, folks are either with the Cartel or against it. Either way can be deadly. Those who’ve “chosen” to side with Sinaloa might, say, land a lab cook job, which may pay almost handsomely. Yet it may also kill them along the way. After all, the closest the lab cooks have to protection is tossing a handful of sand into the air to check the direction of the wind. That and beer, which they’ve been told can counteract fentanyl’s immediately lethal effects. Oddly, U.S. ERs and EMTs aren’t outfitted with cerveza. Perhaps if they were, then we wouldn’t have such a sky high overdose death rate.

But we digress. The point is once the farmers have lost their farms, siding with Sinaloa remains a rather risky proposition. Much riskier, however, is choosing to stand up and fight. That’s another nugget Villamizar uncovered, when she visited a 600-person village that’s been forced to arm its citizens in order to prevent further kidnapping and bloodshed. See, the Cartel had preyed upon this village for over a decade; the villagers finally decided enough was enough. Now the elders train the youngsters in the art of marksmanship. The children begin training as young as six; they graduate to real weapons at 12. And each child’s aim is as important as their participation. Because in a village this poor, every bullet has to count.

There’s no such shortage on this side of the border, where the Arizona Border Recon is armed enough to play live ammo G.I. Joe all day everyday. And play they do. Running and jumping and swooping and shooting across a substantial swath of government-owned lands. The ABR isn’t simply heavily armed though; it sports all the modern mercenary’s customary bells and whistles too, including night vision goggles and heat-sensing cameras. And while this militia doesn’t have the official support of the authorities, that doesn’t seem to much bother them. Unfortunately, history shows that go-it-alone doesn’t always advantage John and Jane Doe, no matter how many statements to the contrary, especially when the loners travel in a well-armed pack.

The Fentanyl Pipeline was obviously built to ensure American drug users have a steady, ready supply of one of the deadliest opioids on the planet. What’s astounding is the degree to which it’s succeeded. Like ExxonMobil, the Cartels had to skirt legalities, slip through loopholes, and exploit weaknesses, at every juncture. Unlike Big Oil though, Big Narco had to meet these challenges without any of the helpful benefits enjoyed by other vast economic concerns.

Since the Cartels generate the same revenue as Walmart, they most certainly rank as a vast economic concern. Since their signature product kills just about the same number of people as a Walmart Supercenter sees in a single week, they need to be put out of business – and fast. The farther and longer the Fentanyl Pipeline flows, the more fatalities we’re going to see. Unfortunately, it seems that nothing short of Prohibition can stop this scourge. And even that’s debatable. After all, Prohibition didn’t do too well with alcohol way back when.

The CIA’s One Pill Can Kill Campaign is a good start. Though here too we risk the same-old, same-old of, say, a Scared Straight. Yes, one pill can and does kill. But kids know that. They’re too sophisticated not to know. It would be dynamite if stakeholders perhaps asked the kids themselves what might be the right message.

Cracking down at the borders also helps of course. But we’ve got to be careful. We don’t want to jeopardize the lives of legitimate immigrants. (And with even more wars, we’re seeing ever more legitimate immigrants.) We don’t want to throw babies and moms out with the proverbial bath water either. Not every mule volunteered to bring drugs into the country. Many mules though get lassoed as if they too were just another trafficker. Once that happens, natch, there’s a high unlikelihood they’ll ever get another chance, let alone a legitimate one. Consequently we need to ensure the good folks at U.S. Customs and Border Protection have the vast resources necessary to meet the increasingly nuanced demand.

And yes we desperately need more treatment. For every American who puts opioids behind themselves, there are another handful only too ready to follow suit. After all, few calling cards get through as much as those coming from a close friend. And every newly-sober someone has at least one close friend in need of recovery. Newly-sober someones are generally keen on sharing their sobriety anyway, so the whole give-and-take is pretty much a natural.

Cutting off the flow from the Fentanyl Pipeline will take all of the above and then some. But that doesn’t mean it can’t be done. It doesn’t mean it won’t be done either. It just may may take awhile. Here’s an idea though: start right now and we’ll have one less person to worry about.

The Choice is Yours

What about you? Have you or a loved one been subjected to fentanyl’s wrath? And? Did you (or they) overdose? Were you (or they) revived? Narcan won’t always be available, you know. Luck won’t always be on your side either. Not so far as fentanyl is concerned. It can’t be. The drug is simply too unpredictable. And far too ferocious.

So, what to do? Well, abstain. Sure, it sounds severe. But it’s not as severe as dying. Heck, after awhile you’ll even learn to enjoy the clean, clear feeling. Ask any sober folk, here at Healing Properties or elsewhere. They’ll tell you. Sobriety can truly be a blast. Oh, they won’t say they’re now without a care in the world. But they will say they no longer spend every day sweating death. Quite the contrary. They spend every day living life. Give us a ring. Please. We’ll letcha know just how it’s done.