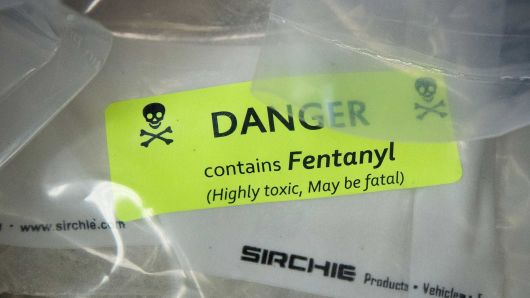 Is Fentanyl a Weapon of Mass Destruction?

Should fentanyl be classified as an actual Weapon of Mass Destruction? The Department of Homeland Security seems to think so. But will such a classification really help stop the rash of fatal overdoses?

Back in 2002 Russia’s Federal Security Service pumped a toxic gas into a Moscow theater to end a hostage crisis. The operation killed the 40-plus Chechen hostage-takers, as well as 200-plus hostages. Some say the gas was fentanyl. Others say it was carfentanyl, which is about 100 times deadlier than plain fentanyl.

Russian authorities also won’t say many hostages were killed in the operation. Russian doctors though did say delays contributed to the high death toll. They also complained about a failure to have naloxone on hand.

Whatever the case, it’s clear some kind of fentanyl-derivative killed a whole lot of people during that Moscow siege. It’s also clear that fentanyl is killing more and more Americans every year. But do these reasons justify WMD classification? DHS says Yes.

The CWMD chief made the claim in a memo to then-Secretary Kirstjen Nielsen. Nielsen has of course since resigned. And there’s been no word on the subject from acting Homeland Security Secretary Kevin McAleenan.

McDonnell may have a point. Fentanyl is “very likely a viable option for a chemical weapon attack by extremists or criminals.” And though we’ve thus far only seen the drug being used en masse by foreign government authorities, America does need to be prepared for such an eventuality. Then again, isn’t that the job of the Department of Homeland Security in the first place?

Some believe classifying fentanyl a WMD may turn out to be just a further escalation of the War
on Drugs. And it most certainly won’t do much to end the opioid epidemic. In fact, the whole idea is almost preposterous.

That’s the take from The Cato Institute‘s Jeffrey A. Singer.

Prohibition is “the main driver of the overdose crisis,” writes Singer. And “denying that the war on drugs is responsible for most of the death and destruction surrounding illicit drug use makes policymakers susceptible to unrealistic claims.”

“Designating the synthetic opioid fentanyl as a weapon of mass destruction,” he continues, “is just the latest example of how misinformation and hysteria inform federal and state policy regarding the overdose crisis.”

Singer’s right in that respect. Prohibition didn’t work against alcohol. And it’s certainly not working against drugs. Oh, it filled the prisons alright. It also left daughters without fathers, sons without mothers and hundreds of thousands of men and women with little or no hope, let alone a future. If classifying fentanyl a WMD only prolongs the War on Drugs, well,then why bother?

Singer’s further concerned that such a designation could hinder if not eliminate legitimate use of a helpful medicine.

“Licit fentanyl is an excellent drug,” writes Singer. “And it is used in many different clinical settings, not the least of which is in the operating room as an anesthetic adjunct.” Fentanyl is also effectively used in treating chronic pain, especially among those who are in palliative care.

On the other hand, “illicit fentanyl is mainly used to enhance the strength of heroin or as an additive to cocaine. Drug dealers also press fentanyl into counterfeit prescription pain pills and sell them to unsuspecting drug users.”

“The DEA states almost all of the fentanyl it seizes is ‘illicit'” he continues. That is, “fentanyl made in clandestine labs in Asia and Mexico. And banning the narcotic “will not cause these labs to shut down or the cartels to stop their already lucrative trade.”

Why? Because it’s as “easy as making meth from Sudafed.” It’s about a thousand times more lucrative too.

The deadly drug has already become a weapon of mass destruction though. And that won’t change. Regardless of any DHS designation.

It’s unclear what such a designation would do anyway. If anything, Homeland Security is trying to put the cart before the horse that already got let out of the stable. A bold move that will accomplish nothing. Sure, DHS should be prepared for any and all eventualities, fentanyl-related or otherwise. But we don’t need more resources put toward fighting fentanyl. We need more resources put toward fighting fentanyl addiction. And not just before it’s too late either. But even before it begins.

If you or someone you love is having problems with fentanyl or other drugs, please give us a call. We’re here to help.