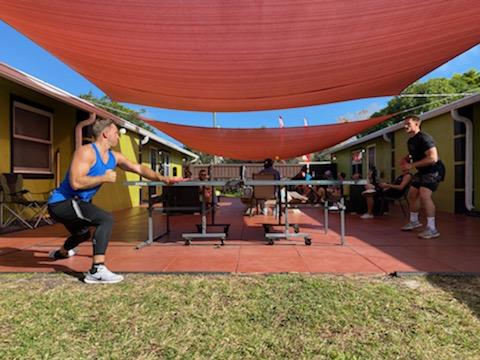 Some folks consider sobriety to be a wish dreamt up by a hope that never met reality. We consider it simply the best way to live. Why? Because sobriety allows us to get the most out of life. The absolute utmost.

A Dollar and a Dream

It all began with a dollar and a dream. Okay, so it may have been more than a dollar and the dream happened to be ocean-sized, but you get the gist. Short resources; big idea. Real big. In fact, the idea was large enough to dwarf any shortage.

That’s it. That was the idea. Share the magic of sobriety. See, ever since the man had gotten sober, life had taken a remarkable turn. In fact, he never felt better — about himself, or his prospects. Ease had entered the picture. Big and small. So did assuredness. Now he wanted to share his so-called sober secret with other men.

But what to do? A man can only sponsor so many other men. He wanted to sponsor sponsors. Build a sponsorship family, if you will. Share the secret with many men. Then it hit him. A sober home. The man was already dealing in real estate. A sober home would be a logical next move. A perfect combination of what he did for a living and who he’d become as a man.

No, HP didn’t immediately succeed. It took a few weeks of trial and error. But luck was on Tim’s side. So was sobriety. Determination helped of course. As did timing. But sobriety made sure everything kept falling right into place.

The Center of Sobriety

It’s easy to see why Healing Properties is located in Delray Beach, Florida. In the first place, year-round fun-and-sun is impossible to pass up — for anyone. In the second, Delray centers Palm Beach County, which boasts the most addiction treatment centers per capita in the country. With a multitude of substance abuse facilities of course comes legions eager for sobriety. Legions in need of guidance, support and camaraderie.

Then there’s the inevitable sober support. That much sober action means 10 times as much sober support. Maybe more. From meetings to meet-ups, sports leagues to sporting events. Heck, even some of the AA meetings are held right on the beach, with the wind from the Atlantic sweeping in across the sober sands. Most importantly perhaps, a man is never more than a minute or two away from another like-minded man, just like him. And even the strongest among men can occasionally use the lean of another strong man.

No shame in that game. Just like there’s no shame in sobriety. In fact, it’s quite the contrary. Sobriety permits a man to walk tall again. To look people straight in the eye, confident in who he is and what he’s up to. If anything, there’s some shame in not opting for sobriety.

So what’s the secret to the secret? Well, it’s really no secret. None whatsoever. See, Healing Properties adheres to the principles and procedures laid out by Alcoholics Anonymous. Principles and procedures that have been in effect, without change, for nearly a century. Then again, why wouldn’t we? AA worked way back then. It’s worked since. And it’s working now, here, for us.

Yep, we take the AA Way. The AA Way means Steps. A dozen of ’em. Each as important as the last — and the next. But you really only have to concern yourself with Step One. Admit that you’re powerless over drink and drugs and that your life has become unmanageable. That’s it. Once you’ve succumbed to Stepping up, the entirety of the 12 Steps will guide you from there.

And so will we, here at Healing Properties. Here you’ll be surrounded by men who’ve Stepped up and into a bright new future. That is, men who’ve worked the Steps and are now rising to the occasion called life.

And these men are willing to share what they’ve learned too. In fact, they’re downright eager to do so. Because every man they help up a Step, the higher they rise themselves. Besides, helping others feels good. And that’s a blessing. Especially after too many years of feeling bad.

So we get a sponsor and work the Steps. We clean up our side of the street and start living sensibly. And when we go for a walk, we put one right foot in front of another until we reach our destination. What’s cool is that the destination usually ends up being one of two places — where we intended to go, or somewhere even better. Often we arrive somewhere even much better.

Then we start helping others help themselves. That’s right. We become sponsors too. Most of us also volunteer — officially (Delray has a great array of helpful organizations) or unofficially (there’s always the proverbial old lady who needs help across the street). Either way, we turn into the kind of people who are ever ready to extend a hand. It becomes our default setting.

Healing Properties wants you to experience everything sobriety has to offer. Really. We want you to rise and shine in the morning, and make great of each and every day. We want you to see what it’s like to realize your dreams, fulfill your wishes and reap the rewards you’ve got coming. Mostly, we want you to be able to stand tall again, and again be able to look steadily at yourself in the mirror. Because once you can do that again, the rest will fall right into place.

Is it easy? Yes and no. Meaning, it’ll take some work. But that work won’t be so hard. It’ll certainly won’t be as hard as active addiction. Not even close. The work will provide satisfaction and relief too. Neither of which we got to experience back when we weren’t ourselves.

And yeah, what about that being yourself part? Aren’t you sick and tired of not being everything you can be? We don’t mean to sound like a recruiting poster, but there’s some truth in that cliche. Real truth. A truth you’ll quickly find once you surrender to the sober life.

Don’t just take our word for it though. Check out what our alumni have said — both in print and via video. There you’ll hear first person testimony from men who are now living their best lives. Men just like you.

Then give us a call. Please. Let us help you help yourself. Remember, we’ve been at this since 2002. So we know a thing or two about a thing or two. And one thing we know for sure — this sobriety stuff works. Everybody can do it too. All you’ve gotta do is step up to the plate and swing! And boy oh boy, wait till you hear the cheers that follow!