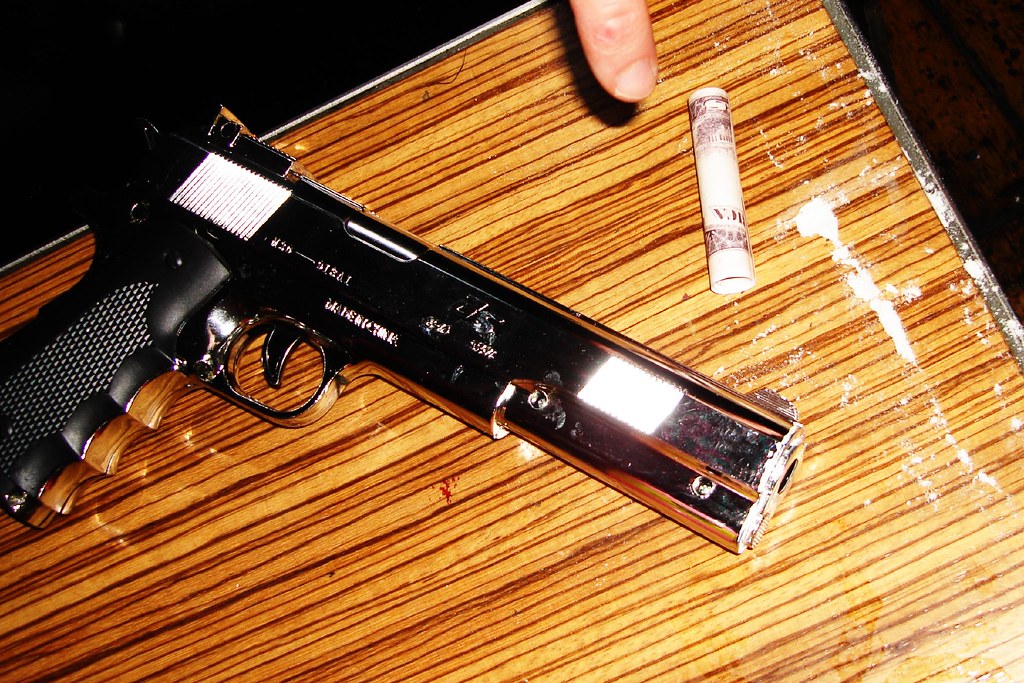 The close correlation between gun nuts and drug addicts isn’t very surprising, especially considering they’re quite likely to be the same person. No, that doesn’t mean there aren’t all kinds of reasons why the same people would be interested in both guns and drugs. It simply means one reason tops all the others. But it isn’t a question of being armed and high (though there may be that). It’s not a question of simply having two bad habits either (though there may well be that too). It’s a matter of firearms being necessary to the narcotics trade. After all, a gun-free drug dealer is probably a pretty inefficient drug dealer — if they live to be evaluated anyway.

So yeah, the correlation between gun nuts and drug addicts is close, as well as concerning. And the closer it gets, the more concerning it becomes. Since that correlation is already far too close for comfort, we’ve decided to take a look into the various links between gun ownership and drug and alcohol abuse. We’ve also tried to identify various ways the risks of even having those relationships might be mitigated.

We begin with the most widespread tie-in: arms and narcotics.

Again, any drug dealer who wants to live through the day-to-day generally carries a weapon. It doesn’t matter whether they’re selling dime bags of “H” to junkies on the corner or flipping kilos for the cartels. If you deal drugs, you do so with a gun. The weapon doesn’t necessarily have to be in your pocket — in can be in the wheel-well of a nearby car or in the hand of a nearby ally — but it better be close.

Consequently, there’s an astronomically high number of drug arrests that also include firearms. In fact, the FBI says 75% of all federally-incarcerated inmates are serving time for both firearms and drug violations. State correctional facilities also report housing significant numbers of inmates on the two charges. No, not everyone of those prisoners was necessarily convicted of drug dealing per se, but the correlation is clear.

It’s also clearly alarming. So alarming in fact, that the U.S. Justice Department launched a program especially designed to address gun crime. The initiative is called Project Safe Neighborhoods, and it’s been implementing violence-reduction strategies across the country since 2001. Some of those efforts are carrot (teaming with U.S. Attorneys to enact firearm penalty enhancements), others are more stick (multi-agency task forces addressing community gang activity), but all target the intersection of guns and drugs.

Internationally, the problems of guns and drugs is even more pronounced, especially via-a-vis arms- and drug-trafficking. And the United Nations Office on Drugs and Crime has been sounding the alarm right along with Safe Neighborhoods. They’ve been doing so just as long too. In fact, it was in 2001 when studies found drug-trafficking organizations had started making law enforcement agencies pay for their product with arms. Read that again. Drug traffickers were trading drugs for arms, to law enforcement agencies.

This of course made for a particularly concerning development. It also made it all the more threatening. See, drug traffickers were not only corrupting various law enforcement agencies. They were also, in turn, significantly depleting the agencies’ respective arsenals. And they were depleting them to such a degree that the traffickers could now effectively out-gun their “adversaries.”

Guns and Drugs and Kids

It’s no surprise that studies found juveniles start arming themselves when they begin drug dealing. It’s also no surprise that more and more juveniles are dealing drugs. Between poverty and peer pressure it seems almost inevitable. Juvenile sentencing restrictions only add further enticement.

As you might suspect, there’s also a larger, ever more troublesome problem with this picture — homicide. That’s right. The correlation between drug dealing and gun possession among kids has also led to an increase in juvenile homicides. Drug and alcohol abuse is exacerbating the problem even further.

In fact, a rather robust National Institute of Health study found homicide is the third leading cause of death among American adolescents. (And the number one cause of death for African American adolescents.) Naturally the odds of homicide increased whenever drugs or alcohol were around. That included whether the adolescent had a history of drug and/or alcohol abuse, their caregiver had a history of drug and alcohol abuse, or even if there was moderate or high drug availability in their neighborhood.

Such stats were particularly high in Philadelphia, where a respective 14% and 26% wer using either alcohol or drugs during the commission of a homicide, and a respective 47% and 98% had historical access to one or both. The study also found that a respective 21% and 46% of the adolescents’ caregivers had a history of alcohol or drug abuse. (The study didn’t bother mentioning the 100% availability of drugs in all the respective neighborhoods.)

If there’s a strong correlation between gun-toting adolescents and drugs, then there certainly must be likewise with adults. But can a narco terrorist also be equated with a deep-pocketed Second Amendment Sam? You bet. In fact, they’re both quite capable of being serious gun nuts. The difference is Ol’ Sam can just as easily be everybody’s best drinking buddy too. Or worse.

That doesn’t bode well for anyone, anywhere.

Just last month Yahoo reports a Denver housekeeper stumbled upon a weapons cache in the upscale Maven Hotel, which is alarmingly close to Coors Field, site of that weekend’s MLB All-Star Game. Seized was more than 1,000 rounds of ammunition, body armor, and 16 firearms, as well as four obvious gun nuts. And though the four were initially suspected of targeting the Midsummer Classic in order to enact some kind of Las Vegas copycat act, it was eventually determined only to be a gun deal gone bad.

Wonder what that was only about?

These echo numerous other harrowing cases, including that of a Maryland teen arrested for allegedly bringing a loaded pistol and a knife to his high school (which subsequently allowed police to seize multiple guns, including an AR-15-style rifle, ammunition, multiple grenades, a tactical vest, and a C4 landmine detonator from his home), and a former Cornell University student who was picked up in Ithaca, NY after a tip from a keen-eyed Walmart employee (which led to a cache that included a Savage MSR-15 Patrol rifle, a homemade silencer, containers of chemicals commonly used to create homemade explosives and over 300 rounds of firearm ammunition). And while we don’t know whether or not the above were using and/or dealing drugs, the amount of weaponry certainly qualifies both as gun nuts.

Can’t they be nuts about something that doesn’t kill people?

How about we say enough? Enough with the guns and the drugs. And enough with the gun nuts and drug addicts. After all, isn’t this clearly a case where enough is most definitely enough? Nobody is benefitting from these people, let alone this situation. Nobody but the arms traffickers and drug dealers who prey upon the populace. And make no mistake, we are all prey. A thing both gun and drug seller seizes and bleeds until it’s bloodless. Then they move on to the next vic.

Got doubts? Think about the tens of thousands of addicts now dead due to fentanyl. The moms and the dads and the daughters and the sons who won’t ever come back. Consider the thousands of people shot dead on the streets of Southside Chicago or Northeast Philadelphia. Aunts and uncles and brothers and the sisters who’ll never again see the cities of their birth. And we’re not just talking about gangbangers either. We’re talking about retired grandparents and tender age children who were simply in the wrong place at the wrong time. (And who came to find out that wrong place can even be their own home.)

But all is not lost. We can make a difference. You can volunteer with organizations such as Everytown for Gun Safety or The Brady Campaign. Or you can start stepping up and doing service at your favorite AA meeting. But frankly, you don’t even need to do any volunteering. Not really. You’ve simply got to stop being part of the problem. That’s it.

Sweep your own stoop, as they say. Or keep your own house in order. Once you’ve got that down, you can decide whether or not you want to get on the service side of the street. You’ll probably gravitate that way naturally. Because you’ll feel so good you’ll want to share the feeling with others.

If you’re above and beyond being a gun nut and a drug addict and would rather actually contribute to society, please give us a call. Healing Properties has been helping men do the right thing since 2002. No reason why we can’t help you do so too. None whatsoever.