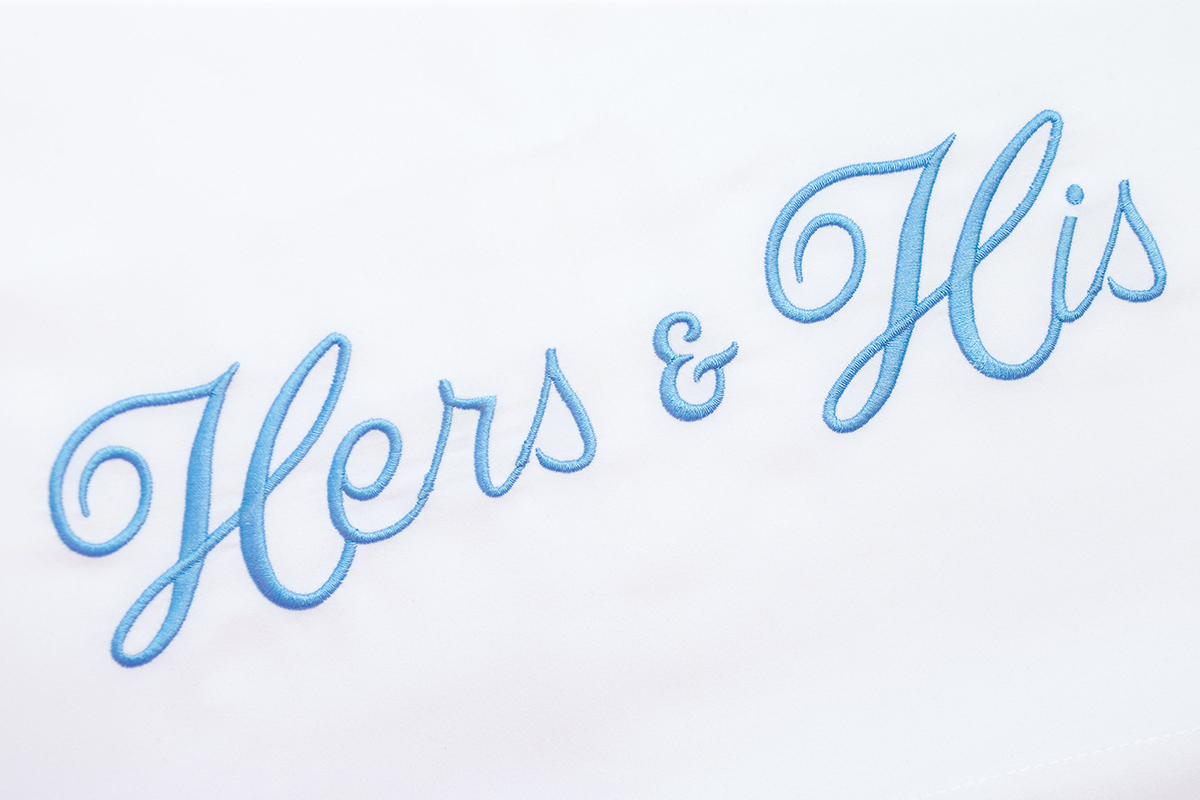 His & Hers Recovery: This Sobriety Deserves to Be Monogrammed!

If Harry met Sally in a 28-day stay place, the resulting movie might end up looking a lot like Dock and Lori’s life. Granted, theirs takes place in Indiana, and not New York. And the preceding friendship lasted weeks rather than years. Nevertheless, both relationships started off rocky then blossomed into marriage. And both His & Her stories are delightful. Dock & Lori’s just happens to be a His & Hers recovery story.

Dock got his addiction the old-fashioned way: he was born with it. That’s what it sounds like anyway. Otherwise he’d have put down the pot at 14. Or at least kept things there. But instead he was on to heroin by 16 and then off to the proverbial races. That race would last 21 years.

Lori also experimented early. High school in fact. But she wouldn’t make drugs a real habit till her first marriage blew up. An abusive husband had left her hospitalized. There she discovered the pain-relieving properties of opiates. She also discovered their capacity to lift her up, up and away from a very ugly day-to-day. That trip took Lori to her deathbed.

Dock met Lori at Home with Hope. It was not love at first sight. In fact, it wasn’t even close.

“We weren’t really friends at first,” Lori told the Journal & Courier. “I [actually] thought he was the most annoying person I’d ever met in my entire life. [laughs] But he became my best friend in the whole world. And then we eventually fell in love with each other.”

The His Part of His & Hers Recovery

Fourteen. Seven. Sixteen. Twenty-One. Fifty. Four. Each of these numbers is extremely important to Dock Henry. They’re even more important to his recovery. So which one do we begin with?

Do we start with the age Dock first tried opiates (14) or heroin itself (16)? How ’bout the number of times he overdosed (7)? The number of years Dock was in active addiction (21)? The amount of failed drug tests during that time (50)? His years of sobriety (4)? Eventually the numbers start to blur. They also begin to appear meaningless.

There’s really only one important number here and that number is seven. No, not because that’s Dock’s overdose tally. After all, those ODs barely caused a ripple in his addicted life. But because seven was the age of Dock’s little boy when he uttered what’s got to be one of the most heartbreaking things a father’s ever heard:

That lucky seven led to another impactful number in Dock’s life. Actually, it was a sequence of numbers. Two, seven and nine. Which is just how long it took Dock to regain custody of his children.

“It took me two years, seven months and nine days,” said Dock. “And I now have sole physical custody of my children.” Dock’s gratification is obvious. It’s also justified. That kind of due diligence is the mark of the truly sober. It’s also the mark of a father who’s got his priorities well in order.

Dock’s also working. Hard. He’s also giving back. Just as hard. And his spot as one of Phoenix Recovery Solutions’ peer recovery coaches permits him to do both. In fact, Dock’s on the quick response team, which swoops in to help on overdoses and mental health crises in the community. So he gets to do both a lot. Too much in fact. That’s why Dock’s also part of Indiana’s stigma-breaking Know the Facts campaign.

Frankly, Dock’s done with all those numbers though. All but one. And that number he hopes to keep changing, year after year after year. Yep, you guessed it. That number is four. Which just so happens to be the number of years he and Lori have both been sober.

The Hers Side of the Recovery Story

Lori remembers feeling different her entire life. Yes, despite the fact that she lived in a “loving household with great parents,” something just didn’t seem right.

“I had that black sheep syndrome, even as a child,” said Lori. “I just felt out of place.”

That feeling led her to high school experimentation with drugs. Marijuana, LSD, ecstasy. Lori tried ’em all. They didn’t stick though. Not really.

That all changed in her early-20s. Married to an extremely abusive husband, she in turn began abusing opiates and alcohol. Then again, it’s not much of surprise after what she went through.

“I had both of my legs broken, multiple broken ribs and a broken jaw,” she said. “Then I was put into pain management.”

The hospital may have called it pain management, but it sounds like anything but. Lori concurs.

“All they would really do was just give me a bunch of painkillers,” said Lori. “They just drugged me up to numb me up so that way I wouldn’t feel all the trauma that I’d actually been through.”

It wasn’t long before Lori had to start turning to the streets to buy more pain pills. It wasn’t even longer before those pills turned to heroin. By then of course, Lori was also on the outs with her entire family. The way-outs.

In 2015 Lori was basically on her “deathbed.” The years of intravenous drug use caused a heart infection. It’s called endocarditis. And it can be fatal.

Fortunately Lori’s sister happened to work at the hospital where she went for emergency treatment. It wasn’t a pretty reunion.

“My sister couldn’t believe it when she saw me,” said Lori. “There was nothing left of me.”

There was though something left in the sister. Some small something anyway.

“I remember her coming into my hospital room and saying, ‘Mom’s not going to come see you and dad is just brokenhearted'” said Lori. “‘You have a choice. You can either let us get you into treatment and the help that you need, or we’re really done this time.'”

Lori believed her sister. She also believed in herself. So she decided to fight. First came detox.
It was there where she attended her first Narcotics Anonymous meeting.

“I was sitting there, shaking, sick, sweating, still going through detox,” Lori recalls. “But I was starting to become a little bit more clear. And I remember thinking I wanted what those people had. These people recovering from this disease. I wanted it so bad.”

Once clean, Lori got into the YWCA Domestic Violence Intervention Prevention Program and started to rebuild her life. It took work. But it was good work. Honest. Productive. Necessary. And it was her own.

So was the house she eventually got. Then Lori did what far too many other abused wives do — she let her ex move in.

Then one day he could hurt no one ever again.

“In March of 2016, he died right in front of me,” said Lori. “Acute hemorrhagic pancreatitis. He [literally] drank himself to death.”

“I couldn’t use the same way again” though, she said. “I’d had a taste of recovery. And I knew how good my life could be without drugs or alcohol in it.”

Lori reached out to her sponsor. She asked others for help. And the recovery community came through. She moved into Home with Hope. She’d also go on to be the women’s program intake coordinator and case manager.

Dock and Lori Henry are determined to raise awareness of addiction. It’s in their work. And it’s in their lives. It’s also, of course, in their stories, which they share as often as possible. It keeps them continually inspired.

“People are recovering out loud,” said Lori. “They’re not quiet about it anymore. They’re saying we are here and we aren’t just this junkie or homeless person. We are parents. And we are children. We are husbands. And we are wives. We matter.”

Jim Gavin, director of communications for the Indiana Family and Social Services Administration, said the stigma of addiction has prevented hundreds of people with a substance use disorder from getting the treatment they need. And with drug overdoses killing five Hoosiers a day, help is still definitely a priority.

“Introducing people to others in their communities is really key in the Know the Facts campaign,” Gavin said. “These recovery stories are what will help people through their own challenges.”

Healing Properties Applauds His & Hers Recovery

Healing Properties congratulates Dock and Lori Henry on their sobriety, as well as their marriage. It’s rare for folks to find the right someone. It’s even rarer for folks to find the right someone while navigating early recovery. Rarer still is for a full-fledged family to form from the connection. That the Henrys have accomplished all this at once heart-warming and inspiring. We’re incredibly happy for them, and for the kids.

Are you battling addiction? Do you want what they’ve got? Are you prepared to put in the work? Then please, make the call. Get help. It’s out there. And it’ll change your life forever.