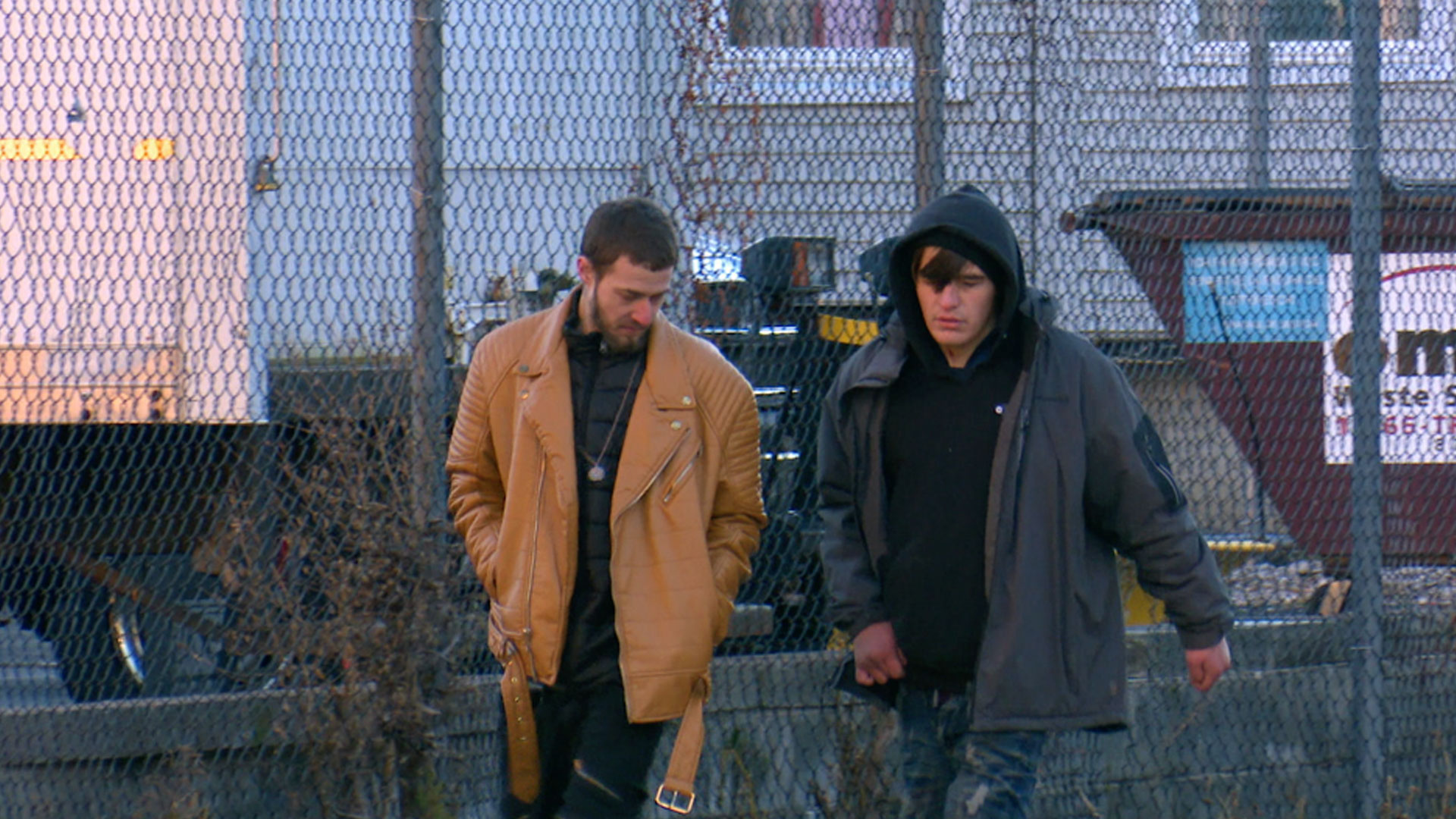 Intervention: All in the Family of Addicts

Most family addiction stories involve rallying around one member who’s fallen afoul of either alcohol or drugs. Sure, there are often other alcoholics or addicts in the family, but they generally hail from previous generations. In this family addiction story however, the problem’s not with a single member — it’s with the entire family. And the good folks from Intervention are seeking to intervene.

That’s right. A&E’s Intervention comes up against an entire family of addicts. A Mom, a dad, two sons and a cousin. Grandpa had some issues too. Can the long-running show summon what it takes to solve this giant-sized family problem?

That’s the premise behind Season 19, Episode 7 of A&E’s long-running series, which takes the hit show’s ordinary challenges and compounds them by seven. Okay, so at root it’s really only two brothers and their dad. But with two addict girlfriends hovering over the proceedings, as well as an Intervention Team that consists of two very complicit grandparents and a just-clean cousin and. well, there’s clearly much more than the core. Heck, the Interventionists have to yank the Mom from the Team before they could even get going!

Once Upon a Time

The family wasn’t always this way. Well, not entirely anyway. Sure, Father Walt once “had a drinking problem,” but he eventually “walked away from it.” Walt also built a successful tree-trimming business. So son Johnny grew up wanting for nothing.

In fact, Johnny actually ended up joining his father’s business. Even became the company’s climber. And that’s about as high as a tree trimmer can rise. (No pun.)

Not-so-little Johnny also picked up a crack habit along the way, as well as a girl. When the couple needed money for drugs, Johnny would naturally go to his father/boss. Dad was reluctant of course. Or at least he tried to be. At first. But if he didn’t fork over the loot, his son wouldn’t go up on the ladder.

Climbing trees of course is risky business. And it wasn’t long before our crack-smoking climber fell and hurt his back. It also wasn’t long before he had surgeries and was prescribed the inevitable pain pills. Or that Johnny’s eventual opioid habit would lead him to heroin too.

Nevertheless, when Walt retired, he left the tree trimming business in the hands of his son. They weren’t very capable hands. Within days the company’s chipper was “stolen.” It didn’t take much longer for the rest of the gear to also get gone.

“He was fine working on crack,” says his Mom. “That was no problem. He was up and on the job with [his dad] every day. The problem wasn’t the crack; it was the heroin.”

Why’d the parents let their son and his gal get away with all the crack-smoking? John was the climber. And without a climber of course there is no tree trimming business.

Fast forward a couple decades. Johnny’s on the streets, as addicted as ever. Now though so are his two sons, Tommy and John Jr. (aka John-John). Intervention initially intervenes to save all three.

Then things get complicated.

See, while the Team’s pow-wowing about the upcoming Intervention, the boys’ mom steps off for a smoke. Her one year sober nephew follows in order to make sure she’s okay.

“I think so,” replies Nephew/Cousin Sean.

“Let’s stop asking questions then,” she adds. “I want to get out of here.”

Then things get a little muddled.

“This makes you wanna get high,” whispers one of the two. The screen crawl says it’s Sean, but when the phrase comes again it looks as if Linda has said it.

Then it gets even more muddled.

Again, we don’t really know who’s asking who. But when the question comes a second time, John offers a reply. So clearly it’s Linda who’s doing the asking.

“So don’t do it,” replies Linda, with all the gusto of someone whose life has once again left her severely disappointed.

The next day’s meeting begins pretty much how you’d expect. After all, that hot mic had captured a very troubling exchange.

“Not only are we dealing with Johnny, John-John and Tom,” says Interventionist Donna Chavous. “We also have an issue with another family member who needs some help… Linda has succumbed to her disease again. And I just wanted to give you [all] an opportunity to say anything that you needed to say.”

For some reason the family seems surprised. Donna Chavous? Not so much. She does though kindly (and wisely) arrange to shuffle Linda off to rehab that very day.

Meantime there’s still an intervention to stage, and Mom plays a very important role. In fact, she’s reading the family impact letters! So before Linda can make her way to treatment, Dad and his boys are brought in.

Later though we find out yet another family member has gotten knocked off his game. Yep, you guessed it. Sean. Seems Uncle Johnny asked for an assist after his own intervention. Then gave one-year sober Sean a bag and a rig as a Thank You.

The rest, they say, is relapse.

Yes, that means Sean was high during his cousins’ interventions. Linda quite likely was too. In fact, Donna and the grandparents were probably the only people who weren’t high during that intervention!

After 79 days in sunny Southern California, Tom is positively glowing. He’s also brimming with absolute confidence. Of course he’s still on the West Coast. But he appears to have enough go in his tank to fully pull through.

So does Johnny, who’s acting more like a responsible John Sr. when we catch up to him on Day 82. Dad says he feels incredible. He looks it too.

John-John, however, lasted just 26 days. The son says he left rehab because his girlfriend “was so far away.” A cross-country bus to Paterson brought them back together. He relapsed immediately.

Sean went 50 days before he relapsed. Then he entered another treatment center and went back out after only two weeks. The second rehab didn’t give him a third opportunity. No word on what happened after that.

Tom’s girlfriend Christine left AMA after 73 days. Then she disppeared.

All-in-all though it’s not a bad average. Three out of five family members now fully clean and sober and a fourth receiving Medicine-Assisted Treatment (MAT). Okay, so most sober folks don’t consider MAT to be “real” sobriety. Many other folks do though. That includes addiction professionals, as well as the law. If it’s helping Sean transition from the street, well, who’s to argue?

How the fam is faring after three years is anyone’s guess. If they managed to stay rallied around each other, then things are likely still steady and sober. If they didn’t, then they’re not. After all, being that close in that town will either save the fam or break the fam. There will unlikely be an in-between.

Interventionist is still going strong though. Twenty-three seasons strong. So’s Donna Chavous, who’s been with the show since 2010 and has over 25 years in sobriety. Then again, that’s generally what happens when you consistently help others and work a strong program. You become stronger yourself.

Whatever the case, Healing Properties applauds the fam for putting it all out there. Sure, the show was quite likely the only way the entire family would ever be able to get all five members into rehab. Nevertheless, even fantastic opportunities can be hard to take when one’s overcome with addiction. Taking such an opportunity on such a public stage can be that much more difficult.

How about you? Are you on the street? Do you have a family member dealing with addiction? Are you seeking some serious addiction treatment? It’s out there you know. We can help get you to it too. Just give us a call.