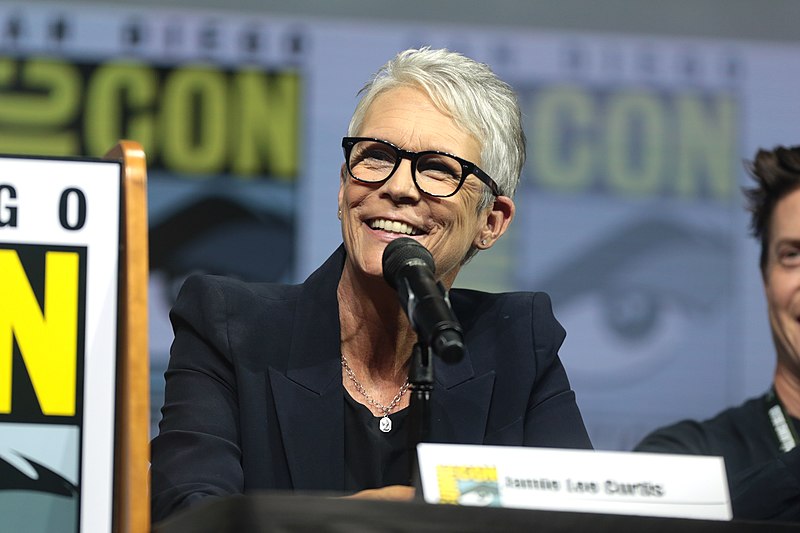 Being soundtracked to Prince’s effortlessly cool party track would certainly make perfect sense. After all, that not only was the year the Hollywood all-star decided to ditch drugs and alcohol. But she’s perhaps one of the most effortlessly cool people on the planet.Then again, when you’re offspring of the tres cool Janet Leigh and Tony Curtis, high caliber cool is pretty much a birthright.

It’s definitely enabled her to traverse the world with sheer unmitigated aplomb. It’s also permitted us all to enjoy every moment of her wildly fortifying ride.

Well, perhaps not every moment. See, for a good long time there were many moments Jamie Lee kept very secret. Or she tried to anyway. Ten long, hard years of moments.

Jamie Lee had become addicted to pain pills in 1989 after having minor plastic surgery on her eyes. Again, it’d be a full decade before she sought treatment. In between was the crazy sick world of the addict.

“I didn’t know it then,” she said. “I chased everything, Kept it hidden. And I was as sick as my secrets.”

So sick in fact, that she apparently thought it was apropos to pose with an empty fifth of spirits. From the smile on her face it’s pretty clear where the contents of that bottle wound up.

That’s obviously why Jamie Lee just Instagrammed the throwback pic. To help her remember not just where that smile came from, but the harm it caused, her and the rest of her family.

Indeed, the perennial Halloween screen legend springs from a line that’s had more than its unfair share of addiction battles. In fact, Jamie Lee’s brother Nicholas died of a heroin overdose. And her father Tony Curtis also had issues with both drugs and alcohol. A fact she knows all too well.

“I shared drugs with my dad,” Jamie Lee told Variety in 2019. “I did cocaine and freebased once with my dad. But that was the only time I did that. And I did that with him.”

Her father did eventually seek treatment. He even found a little sober success.

“[My father] did end up getting sober for a short period of time,” adds Jamie Lee. “He was very active in recovery for about three years. It didn’t last that long. But he found recovery for a minute.”

It’s great to learn that duly venerated screen legend Tony Curtis did find some respite from his addictions. It’s also great to see Jamie Lee in a place where she can truly appreciate her father’s sobriety, however brief it happened to be. Then again, she does have the grace of someone packing 22 years of sobriety herself. She’s also got the gratitude. Ever the humble alcoholic however, Jamie Lee places the credit elsewhere.

“With God’s grace and the support of MANY people who could relate to all the ‘feelings’ and a couple of sober angels…” ran her Instagram caption. “I’ve been able to stay sober, one day at a time, for 22 years.”

Jamie Lee does give herself some credit for getting sober. Though she says the achievement surpasses all of her many endeavors. Each and every one of them.

“I’m breaking the cycle that has basically destroyed the lives of generations in my family,” she told People. “Getting sober remains my single greatest accomplishment… bigger than my husband, bigger than both of my children and bigger than any work, success, failure. Anything.”

Talk about putting sobriety up against a heckuva lot of accomplishments. In the first place, the Hollywood Walk of Famer has been nominated for everything from a Fangoria Chainsaw Award to the Golden Globe, on more than many occasions. In fact, she once won the Fangoria and twice won the Globe. And while we can’t count the number of movies she’s made since debuting in 1978’s Halloween (let alone how many TV shows she’s been in since her 1977 guest-spot on Quincy, ME), we do know the list is lengthy, varied and incredibly accomplished. Throw in her vaunted philanthropic work (she and her father helped finance the rebuilding of Budapest’s Great Synagogue and she has leadership roles at both Children’s Hospital Los Angeles and the Children Affected by AIDS Foundation) and, well, you get a life positively riddled with accomplishment.

But if Jamie Lee Curtis wants to highlight sobriety who are we to argue? After all, she’d have the right to claim whatever she wanted regardless. Something we’re pretty sure she’d affirm given any opportunity.

Healing Properties congratulates the great Jamie Lee Curtis on her 22-year re-birthday and we wholeheartedly thank her for giving us all a lifetime of grand entertainment. We’d also like to thank Today Community’s Drew Weisholtz for penning the piece that led to this report. The world’s a whole lot keener for reporters like him. Oh, and while we’re at it. A heaping helping of gratitude should also go to writer Tom Chiarella, whose Esquire piece “Vicodin, My Vicodin” (subscription required) was the actual catalyst behind Jamie Lee’s sobriety. Jamie Lee even says so. So we say, good show, good man. Damn good show.

Speaking of sobriety… how are you faring during this crazy time? Holding up okay? How about your loved ones? They managing to handle all the weight? Either of you dipping a little too deeply into the drugs and/or alcohol? Feel like it’s becoming a thing? Would you like some help? You can flip the script you know. Just like Tom did. And just like Jamie Lee did too. You may not wind up with a star on the Hollywood Walk of Fame, but who knows? Everything is possible. Especially via sobriety. At the very least you’ll wind up walking taller and prouder. And sometimes that in itself is all it takes to segue into a productive and successful life. If that sounds good to you, give us a ring. We’d be absolutely honored to help. Really.