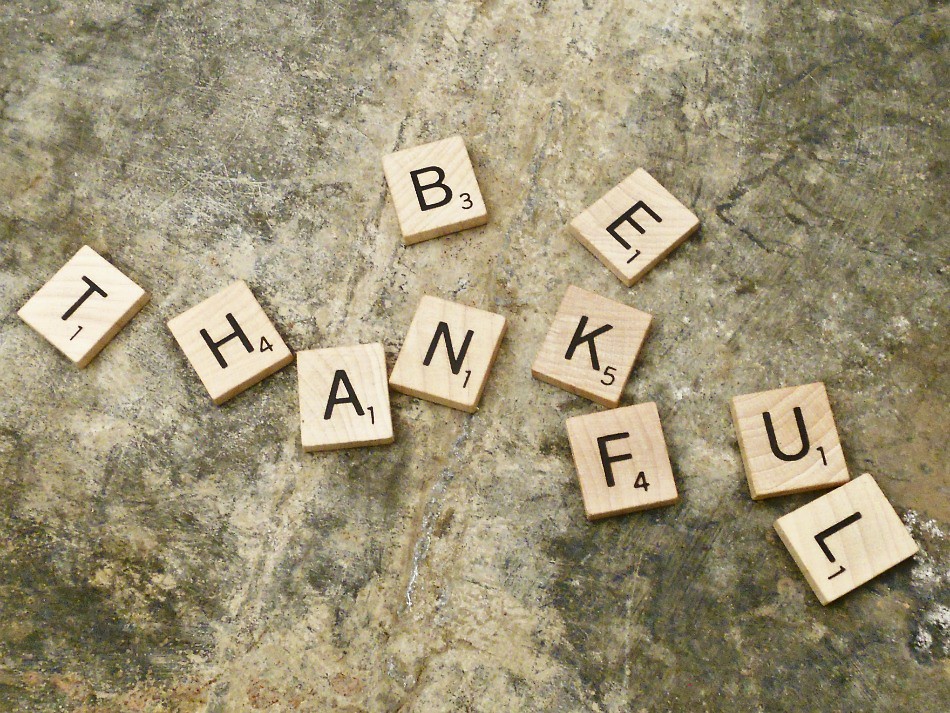 Just Be Thankful You’ve Got Gratitude

What happens when a positive psychologist receives a negative diagnosis? Do they reach into the standard toolbox? Do they rely upon previously-applied research? Or do they craft a set of tools and conduct rounds of research that specifically befits the new paradigm? Does being thankful ever enter into the equation?

Well, in Christina Costa‘s case the answers are No, No, Yes and You bet! Because when this University of Michigan grad student was diagnosed with a brain tumor, she ditched the traditional narrative and instead chose a response which was as elegant as it was unorthodox.

Okay, so Costa didn’t only choose gratitude. She also chose to be treated by a rather formidable team from the renowned Michigan Medicine Multidisciplinary Brain Tumor Clinic (M3BTC). But you get the idea. It turned out perfectly too. Because Team M3BTC actually gave her many more reasons to be thankful.

Not everyone is a fighter type. That becomes pretty clear early in life. But just because a person wouldn’t make a good boxer or footballer or soldier, doesn’t mean they’re not tough or tenacious or courageous. It simply means they’re not built for the ring or the field or the battlefront. These folks instead thrive in places like classrooms, labs, offices, work sites, even homes. And be assured that each of those places come with their own unique set of challenges.

Costa seems to be built for the classroom. She taught Middle School Science. And she currently teaches high school and Undergrad Psych. Her friends are also teachers. In fact, one of her main mantras comes from one of her teacher friends’ classes. And if the smile that alights from her face whenever she speaks of teaching is any indication, the profession is really more of a calling.

That smile is evident throughout Costa’s TEDxUofM Talk “How gratitude rewires your brain.” Like most of the best TED Talks, Costa’s is based on something intensely personal. And like most of the best TEDTalks, it also offers an alternate solution to a wide-ranging problem. In this case, it’s how to best address a very serious illness.

The common disease-fighting narrative, of course, is that of the fighter/athlete/warrior. “You can beat this opponent.” “You can win this battle.” “You’re a champion.”

That’s pretty much all Costa heard ever since her diagnosis. It was also the commanding narrative when she went in for her initial MRI. In fact, the narrative became so prevalent during her first hospitalization that an affiliated tagline claimed its own Instagram post. “I will keep fighting” read the refrain. Five times.

Curiously though, Costa went back and crossed out four of those “fighting” words. This is the result: 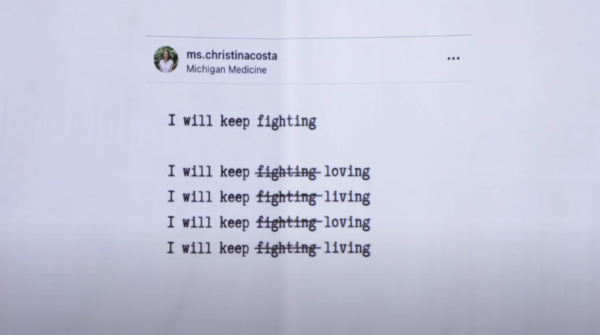 A week later Costa sat down and wrote this:

“Fighter. I tried it on to see how it felt because I kept hearing those words next to my name, like a job, like an identity, like a role. Fighter. I look at myself in the mirror. It felt OK at first, but soon it became exhausting, too heavy to lift, too much to carry, too burdensome to bear. I took it off and left it on the floor. War was not for me. A body is not a battlefield.”

Costa just wasn’t the fighting type. Never had been. So why would she be now? Sure, she was only 27. And yes, this was unlike anything she ever faced before. But still. She had schooling. She also had experience. So she certainly knew a thing or two about a thing or two.

One of the best things she knew was how to love the brain. In fact, she not only kissed it goodnight throughout much of her adult life, but she convinced her students to kiss their brains too. Really. Ever since she saw a teacher friend’s kindergarten class kiss their hands and tap their heads. Why? Well, first because it was exquisitely cute. Then because it became intrinsically meaningful.

When Costa got into grad school and started teaching older students though she set aside her “kiss the brain” exercise. Then came the initial diagnosis and she resurrected the practice in earnest. Sure, she saw the irony. After all, how often does such a fervent brain lover suffer such a flagrant brain malady? But she never let the affliction affect her feelings for this most beautiful organ.

When physicians’ suspicions rose to absolute facts, Costa only increased her affection. She had to. She absolutely hated the idea of going to war with her brain, especially after spending months and years so devoutly loving it.

Costa instead started practicing everything she preached. She knew the positive effects of gratitude practices, specifically as a well-being strategy, but she’d never seriously practiced them herself. She stopped focusing on what her body had done “wrong,” stopped being overly concerned with what ills might lay ahead, and instead became resolutely thankful — to science, to medicine, to her medical team, and, yes, to her brain.

Eventually those feelings became a dominant force to be reckoned with in their own right. And tomorrow is already becoming brighter as a result.

We eagerly look forward to being even further brightened by her light.

Google “gratitude as a cure” and Harvard Health will lead you right to the core of this story.

Costa, being the deft positive psychologist, obviously knew all about the clinical findings in gratitude research. Being a consistently thankful person though ensured she also had personal knowledge of the many benefits to be found in the practice.

Scroll down that search a bit and Life Coach Directory offers a gratitude round-up that cites everyone from Robert A. Emmons, Ph.D. (who Greater Good Magazine calls “the world’s leading scientific expert on gratitude”), to hard science studies from the Journal of Applied Sport Psychology and Scientific Reports. As you probably suspect, this all too reinforces Harvard Health’s definition. To wit:

Most folks would be thrilled with even two or three of the aforementioned benefits. To think that they’re all available is more than enough reason to be truly grateful.

So what are you waiting for?

Look on the Bright Side

Someone cut you off in traffic? Almost hit you? Speed by at twice the normal limit? So what? At least there wasn’t an accident. If anything, you should be thankful to not have their bad driving habits. After all, they’re likely heading for something from which they may never return. Furthermore, can you imagine living in the head of such a selfish and aggressive person? It must be maddening.

It certainly can’t be joyful. Joyful is the person who’s simply happy to have a car, as well as a driver’s license. Someone who’s also grateful for the roads and the infrastructure that enables them to safely get from Point A to Point B. Not everyone even has the means for a vehicle. And not every city has reliable roads. That’s something Americans too often forget.

That’s just one instance in our multi-dimensional lives. If you can be thankful for being behind the wheel of a gleaming machine, then certainly you can be thankful for, say, sitting down to eat a healthy meal or laying down to sleep in a comfortable bed. Are you lucky enough to be sharing that meal and/or bed with someone? Well, there’s another fantastic reason or two to be truly grateful!

Of course, we’ve barely even scratched the surface. Look and you’ll see there are many, many reasons to look on the bright side. In fact, you don’t even really need to look. Close your eyes and think about your life for a moment and the reasons will come cascading down like winning coins from a slot machine. And once you recognize how much your life is enhanced by every drop of the coin, you’ll start thanking yourself for simply being able to thank yourself.

Healing Properties has been helping men get and stay clean and sober for 20 solid years. We were thankful to be able to open a sober living facility. And we’re thankful to be able to keep the sober home so smoothly running along through two decades. Above all, we’re thankful to all the men who’ve passed through our doors. We’ve found joy and camaraderie with each and every one of ’em. We’ve learned from them all too. And their sober successes mean we get to rise every day with thousands of reasons to be grateful.

How about you? What’s your gratitude stack look like? You’re reading this, so you’ve got a device. You’ve also got eyes. That’s two great reasons right there. Could you use a few more? How about piece of mind, healthier habits, structure and sobriety? Will that do for you? Well then, give us a ring. We’ll get you sorted. Because that just so happens to be what we do!