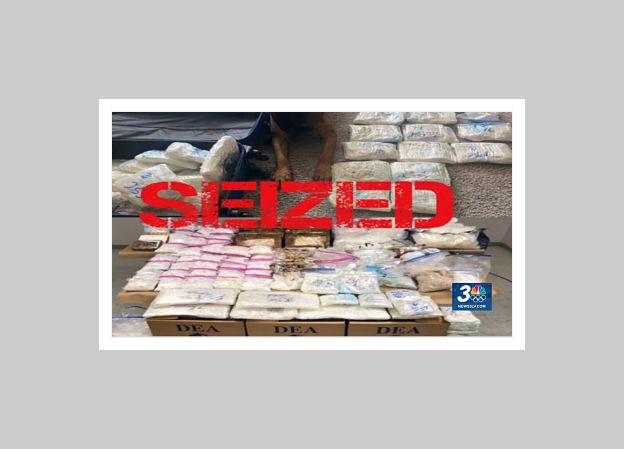 Las Vegas Feds Get Four of a Kind

People commonly drop a bundle in Las Vegas. Heck, some people drop their very last dime. But few folks lose as much as these folks lost. Unfortunately for them, the losses were illegal. They lost it to the Feds too. So they’re going to be adding some serious prison time to the financial loss.

Then again, when you lose 280 pounds of methamphetamine, 10 pounds of cocaine, 12 pounds of heroin, and 6 pounds of fentanyl, you might want to go away for awhile. Because someone is going to want to recoup those losses. They might not be to happy about taking the hit either.

A Pretty Large Get

Believe it or not, the bust wasn’t a record. However, “it was a pretty large get.” That’s what the DEA’s Cindy Marx told News3LV on-air ace Steve Wolford. Since Marx if the agency’s Acting Assistant Special Agent in Charge in Las Vegas she should know.

Oddly though, KSLV’s 5x Emmy-winning Wolford was the only reporter to cover the story. So either someone is slipping or the world’s simply becoming bored with massive drug busts.

If it’s the latter, then we must also be bored with the consequences. Or at least resigned to suffer their fate anyway. Because 280 pounds of methamphetamine, 10 pounds of cocaine, 12 pounds of heroin, and 6 pounds of fentanyl can hurt a whole lot of Americans. And we don’t mean just the overdosing users either. That much drugs will take down families and friends and who knows who else. Hell, flooded correctly, a cache like that can take down entire towns.

Do you know how many people can die from a pound of fentanyl? No? Well, a single 2-3 milligram dose is enough to kill a person. If there are 453,592 milligrams in a pound (and there are), then each pound has the potential to take down between 151,197 and 226,796 people. No, those pounds won’t stretch quite that far. Even on their worst day. But just considering such figures is enough to cause real pause. Multiplying the numbers times six should be enough to call for a National Emergency.

What Happens in Las Vegas

Perhaps people are a bit blase blase because the bust happened in Las Vegas. After all, aren’t we supposed to keep mum about what goes down in America’s favorite party town? Well, the tagline might wink a say so, but it’s really nothing more than a wink. Nobody really expects folks to keep quiet about murder, especially mass murder.

Or do they? After all, Americans don’t seem to be making much noise over last year’s 100,000 drug overdose deaths. In fact, aside from a few Maia Szalavitz types, they’ve remained basically silent. Oh sure, every statehouse in the land is bursting with politicos fighting over Big Pharma payouts; they may even end up doing some good with the loot. But shaking down murderers after they’ve killed isn’t the same as being tough on crime. And it sure doesn’t serve as caring or compassion.

Besides, Marx told Wolford that while there’s a good chance the seized drugs might stay in Vegas, their real destination is really unknown. “Sometimes it’s just passing through, and sometimes it’s local-based customers are buying it here in Las Vegas.”

Marx also pointed out that much of the seized meth came in counterfeit pill form. And since that manufacturing process is usually reserved for fentanyl, it shows meth’s popularity is also on a deadly rise.

Just as bad, if not worse, are the manufacturers themselves, who hardly take safety precautions, let alone adhere to any pharmaceutical guidelines.

In other words, this is a case when what happens in Vegas rarely stays in Vegas. Most folks eventually leave Las Vegas. Only if they’re lucky do they get to leave standing up.

According to Las Vegas Fire and Rescue EMS coordinator Joe DiGaetano, more and more folks aren’t that lucky. The tireless first responder told Wolper drug overdoses have skyrocketed, especially throughout the COVID pandemic. He also seemed to indicate that fentanyl’s popularity is also skyrocketing, whether folks know it or not. Consequently, what’s rising most and fastest is first responders’ need to pull out the Narcan.

“I’d say even when I first started in the ’90s, [overdose-counteracting Narcan was needed maybe] tens of times a year,” DiGaetano said. “Then it went to the hundreds. Now I’d say, county-wide, we’re using Narcan maybe a couple of thousand times a year.”

“And that’s just the ones we find,” he continued. “There are times when there’ll be a need for Narcan and no one was there.”

When it comes to meth though, there’s no such magic potion. Overdose means overdose.

“Unfortunately, Narcan only works on opioids,” he explained. “Meth and cocaine are uppers, so Narcan has an opposite effect within the body. Actually, it has no effect with meth or cocaine type products. [emphasis added]”

Marx said she thinks that because methamphetamine has always been a problem we sometimes lose sight of the fact that it’s still a problem. In fact, now that meth is arriving in bulk it’s becoming even more of a problem here in Nevada.

Are you battling meth? How ’bout heroin or fentanyl? Popping too many pills? Smoking too much coke? Would you like to stop? It’s possible, you know. Very possible. All you’ve gotta do is pick up the phone and commit. Really. You tell Healing Properties you’re ready to kick drugs to the curb, and we’ll make sure they get to the curb and you back to being you. You’ve gotta be ready for success though. Real success. Because by the time you start seeing dreams come true right before your very eyes, you’ll be in for the ride of your life.