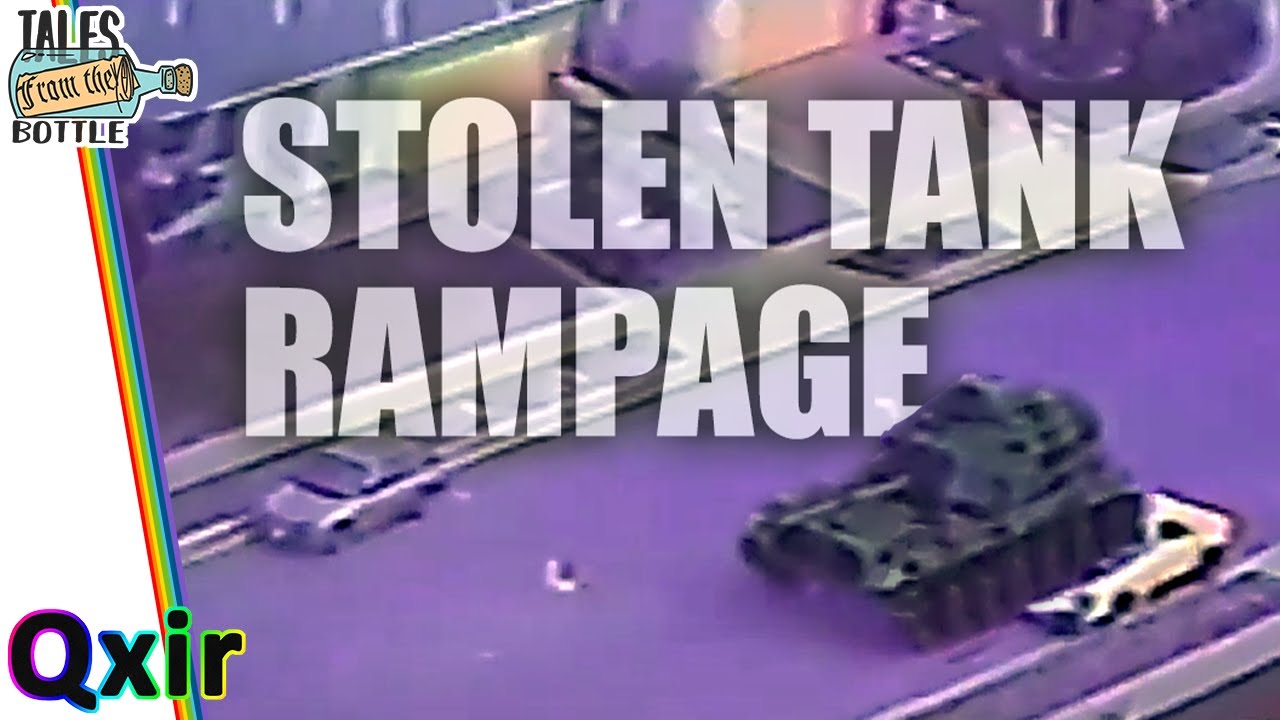 Meth Addict Steals Tank — It Does Not End Well

This graphic footage of a meth addict plowing a stolen U.S. Army tank through suburban American streets might look like it was pulled from a bastardized version of Grand Theft Auto, but it wasn’t. In fact, the rampage is as real as real can get. So was the damage caused by the rampage, which ripped out power to a whole neighborhood, uncorked a fistful of fire hydrants, flattened a dozen or so cars and gutted an RV. Perhaps realest of real though is story behind the story; how even the most regular Joe can become a most irregular danger to himself, as well as to the community.

For most intents and purposes, Shawn Nelson was pretty much a Regular Joe. He grew up in Clairemont, a well-appointed San Diego subdivision peppered with parks and celebrity pedigree, including Mark Hamill, Kris Jenner and former California Governor Pete Wilson. Nelson attended Madison High before enlisting in the Army, where he wound up serving as part of a tank battalion in West Germany. And while his two-year hitch was marred by what the military called “multifaceted” disciplinary problems, he did manage to eek out an honorable discharge before moving on to a new life.

“We had a pretty good life for six years,” she told the reporter. “We owned a home, he was a successful plumber and I was a legal secretary. [You could say] we had it made.”

Until they didn’t. Nelson’s mother Betty died in 1988 and Nelson’s life slipped off the rails. Two years later Hellman filed for divorce. Then Nelson crashed his motorcycle and tried to walk out of Sharp Memorial Hospital before he could even be treated. When the hospital wouldn’t let him leave, he sued them for false imprisonment and malpractice. The judge laughed it out of the courtroom.

The next three years saw Nelson’s life slide from the proverbial bad to worse. His dad Fred died, his tools were stolen, and his girlfriend fatally overdosed. Now a full blown meth addict, he suffered some of a full blown meth addict’s usual repercussions, including having his power shut off and his home go into foreclosure. Beyond desperate, Nelson started digging for gold in his backyard.

Seventeen feet later Nelson gave up on his gold-digging and headed out for more tangible bounty. He found it in San Diego’s Kearny Mesa neighborhood, home of the local California Army National Guard Armory. Seems that’s where the Guard parks its tanks (well, it did so then anyway). It also seems the Guard sometimes leaves the keys in those tanks (ditto). When Nelson found a parked tank with the keys in its ignition, he did what any meth-crazed former tank battalion member does — he took the tank for a drive.

Rampage of a Meth Addict

A 57-ton M60A3 Patton U.S. Army tank can do some considerable damage. Some very considerable damage. It can do it to pretty much anything and anyone it wants too. Thankfully Nelson wasn’t interested in harming people. Well, at least he didn’t seem to be anyway. And except for an unsuccessful attempt to bring down a pedestrian overpass on Interstate 805 his casualties were restricted to utility poles, fire hydrants and motor vehicles.

But a tank can kill a lot of cars in 23 minutes. Flatten ’em into pancakes even. And over the course of that 23 minute, 30 mph chase (which we came to through the keen cool Qxir btw), Nelson pancaked an entire fleet. It was when he got on State Route 163 though that the episode really took a potentially deadly turn. Apparently unhappy with San Diego PD’s capacity to keep cars at bay on his side of the freeway, Nelson tried smashing his way to the other side. When the tank got stuck on the dividing wall, four cops jumped atop the tank and tried to pry open the hatch.

Fortunately, then Marine Corps. Reserve Gunnery Sergeant Paul Patton was among the responding officers, and he was finally able to get the hatch open. Nelson however wasn’t about to stop. And despite repeated orders to surrender, he kept attempting to dislodge the tank. Finally, Patton’s partner Richard Piner put a bullet in Nelson’s shoulder and the incident was over.

Well, almost over. Taken back to Sharp Memorial, doctors were unable to save Nelson and he eventually succumbed to the single gunshot.

Give Me a Heroin User Anytime…

“Amphetamines make people nuts and aggressive and violent,” San Diego psychiatrist Dr. Mark Kalish told Rowe. “You could call 100 guys who deal in this field and 99 would tell you — this guy was on amphetamines.”

And how. Kalish also told Rowe that meth users aren’t just prone to heart attacks and strokes; they’re also prone to delusions. Now nobody knows what delusions had overcome Nelson on that fateful day, but it’s a cinch they were serious. They were also undoubtedly more extreme than those suffered by any other kind of drug abuser. That’s just the volatility of the drug.

“Give me a heroin user over amphetamines anytime,” said Kalish.

Indeed, when a meth addict snaps, there’s no telling what will happen. But it’s highly unlikely to be desirable to anyone within range.

Unfortunately, in the 25 years since Shawn Nelson went on his rampage, meth abuse has increased at an alarming rate. In fact, the National Institute on Drug Abuse (NIDA) estimates 964,000 people aged 12 or older (about 0.4 percent of the population) had a methamphetamine use disorder in 2017. That is, they reported clinically significant impairment, including health problems, disability, and failure to meet responsibilities at work, school, or home as a result of their drug use. The reported number of those from the year before? 684,000. A near 300,000 person increase is certainly cause for alarm.

So what to do? Well, there’s really no easy solution. Treatment of course is essential. The more the better. And many states have shown a desire to increase their addiction treatment center footprint. Diversion is also proving to be incredibly helpful. And more states and municipalities are also discovering that handcuffs aren’t the answer to addiction. For the meth addict though, their abuse often doesn’t come to institutional attention until they’ve committed a severe crime. And that creates a whole ‘nother set of impediments.

The best we can do is to provide options, at every opportunity, for those who are most prone to meth abuse before they imbibe. Offer people education, be it college or trade school, with no strings attached. Divert minor drug offenders; then reward subsequent achievement. Implement high profile awareness campaigns with this week’s hotshot celeb or figurehead. And make Shawn Nelson’s story required viewing in every Junior High drug abuse course. Make sure of course each student knows just how the story ends too. How most meth stories end. Perhaps once kids see what the drug does to a person — no matter who they are or where they come from — they’ll think thrice before putting it into their system.

What about you? Problems with meth? Does a loved one perhaps? Is there some other drug bringing you down? Do you want help? It’s available you know. It’s also effective. If, that is, you’re willing to apply yourself. All you’ve gotta do is call. SAMHSA. NIDA Healing Properties. Someone. Anyone. Just pick up the phone. Please. So how ’bout it?

(Clip and Image courtesy the good folks at Qxir.)