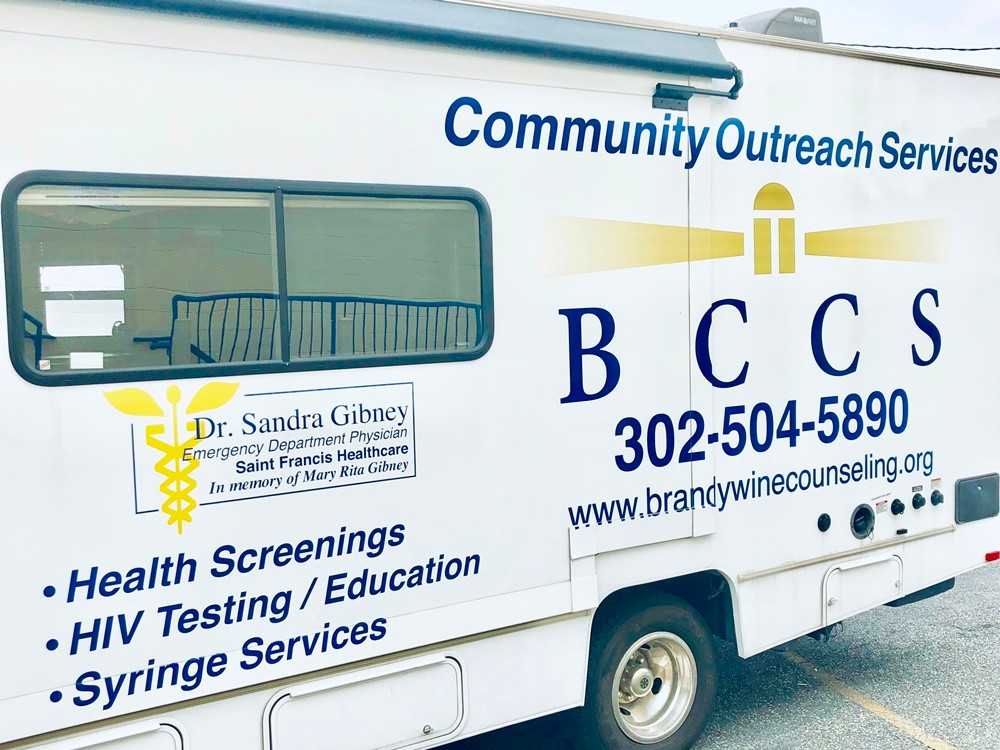 Taking it to the Streets: Addiction Services Where They Can Best Help

Middletown may be Delaware’s fourth largest town, but it doesn’t have a single rehab. It does have a drug problem though. A big drug problem. Thankfully, it now is also providing addiction services that just might help solve that problem. Better yet, those addiction services are being made available right on the streets, where they obviously can do the most good.

Okay, so it’s actually a parking lot, rather than a street. But that doesn’t mean it can’t be a street. Or that it won’t be a street in the future. Why? Because those addiction services are being housed in a mobile unit. This way the operators can post up wherever the need is most acute.

Located right where it’s been located since 1851 (albeit with a name change or three), Church on Main is the epitome of perfect locations. Oh, it’s not so much that the church is set in the proverbial thick of things (though there is that); it’s more that the church’s philosophy is perfectly aligned with a Downtown that’s more than ready to rise up and reassert itself.

In fact, Church on Main is already doing just that. The church came out of the closet (so to speak) back in June 2019 and they’ve been flying the LGBTQ+ flag ever since. In fact, they’re still the one and only Middletown church to do so. Then last January the church added the #BlackLivesMatter flag to its flagpole. And — yep, you guessed it! — they’re now the first and only church to fly that flag as well. And though some backwards-facing hater tore down and burned both flags last year, Church on Main quickly raised two new replacements. Both flags continue to wave across the Middletown skyline today.

And now, two days a week, those flags are flying over a mobile addiction services unit fielded by Brandywine Counseling and Community Services (BCCS).

Just as Church on Main is perfectly aligned with a forward-looking Downtown, BCCS is unquestionably most perfectly suited to field the mobile addiction resource units. Much of that spot-on suitability comes from the fact that BCCS happens to run five free-standing treatment centers of its own, including two that feature the Rise Adolescent Program. Much more of that suitability comes from the fact that the nonprofit also provides a full complement of services, including Education, Prevention, Early Intervention and Peer Support, both on-site (they’ve even got Drop-In Service) and off (via a variety of community events and programs).

Furthermore, after a 1984 that saw BCCS splinter off from the Wilmington Medical Center and become a full-fledged nonprofit of its own, the organization has achieved full member agency status with the United Way (1988) and helped lead early efforts during the HIV/AIDS Crisis (1989’s C.O.A.P.E. outreach project). BCCS was also an early adopter of the Delaware Treatment and Referral Network (DTRN), as well as the state’s Substance Use Treatment and Recovery Transformation (START) Initiative.

According to Amanda Parrish of the Delaware News Journal the tag-teaming came about after Church on Main Pastor Brent O’Neill came to BCCS to voice his concerns. It seemed more and more of the church’s neighbors and parishioners were suffering from substance abuse, and the pastor was determined to try and do something to address the issue.

BCCS Program Coordinator Dennis Broomell wasn’t at all surprised. Broomell had grown up in the area, so he knew a bit about Middletown. In fact, Middletown was where he and his friends used to go and buy drugs way back when. It’s still where people come to buy drugs.

“When he spoke to us about the need in Middletown, it really matched what I grew up knowing about the town,” Broomell told Parrish. “Middletown is an old soul town, but as it continued to build up, and of course as you build up cities, you get more crime and more drugs.”

Just ask Middletown Police Department Sgt. Scott Saunders. He knew Middletown had a drug problem alright. After all, he sees it firsthand each and every day. The Sgt. also believed a holistic approach would be the best way to fix the problem.

That was one of the reasons why Saunders had also come to meet with Broomell and BCCS. That and the fact he was also tired of the whole head-in-the-sand position adopted by much of the townsfolk.

“We have to respect the power that substance abuse has over people,” Saunders said. “Too many people think ‘Oh it’s not happening to me. It’s happening to them.’ We have to re-imagine some things and think more outside the box to solve these issues.”

Broomell concurs. Though he also points out that most residents aren’t in as vantaged a position as he or O’Neill or Saunders. Consequently they don’t see the increasing enormity of the problem.

“[Middletown residents] have that old stigma ‘Oh we don’t have that problem’ or ‘That problem doesn’t exist here,'” said Broomell, “because a lot of people don’t see it happening on a day-to-day basis.”

Each and every Wednesday and Thursday since February, two mobile clinics have been opening up in the Church on Main parking lot and providing the kind of addiction services people would normally have to travel hours to receive. It’s a veritable bounty of services and resources too, from clean needles and Narcan, to HIV tests, Suboxone prescriptions, mental health evaluations and one-on-one counseling. And get this, all of the substance use services are free.

They’re also working. In fact, Pastor O’Neill said he already knows of at least one person who was revived by Narcan right there in the church’s parking lot. It’s quite likely there are many more the good pastor doesn’t yet know about. And without the united efforts of the Brandywine Counseling and Community Services, the Middletown Police Department and Church on Main, none of those folks would be alive right now.

Healing Properties wholeheartedly salutes Church on Main Pastor O’Neill, Middletown Police Sgt. Scott Saunders and BCCS Program Coordinator Dennis Broomell, as well as all of their respective colleagues, for launching and hosting such a life-saving community enterprise. May their bright and shining example help persuade other municipalities to muster the strength and the wisdom to provide such essential addiction services for their own communities. We also thank ace Delaware News Journal reporter Amanda Parrish for bringing such good story to our attention.

Note: On Thursday, April 22, at 7pm, the good folks at Church on Main are hosting a virtual resource fair in conjunction with Brandywine Counseling, SN4C and the Middletown Police Department. If you’re from the area — or if you’re simply interested in finding out how to support people who are struggling with substance abuse — here’s how to attend.