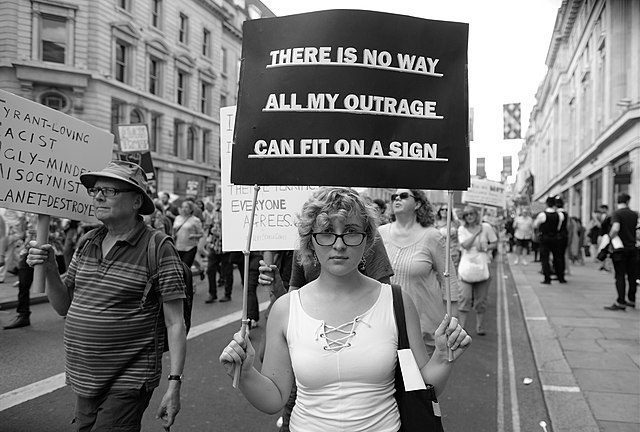 Outrage Addiction is a bona fide cause for concern. Deep concern. So deep, in fact, that it’s created worry lines in truly caring people all across the land. Ivory Tower think tanks are earnestly studying the malady, Op-Ed pages are decrying its spread and devoted teachers are being stymied by an entire generation of students who believe the loudest shouter is always right. Heck, even that ever-polarizing loudmouth Glen Beck wrote a book about outrage addiction. We don’t believe the loudmouth was being ironic either. Especially not after he suggested the best way to beat the disease was via the way he beat addiction.

And outrage addiction is indeed a disease. Insidious, destructive and chronic. And though outrage itself seems to be harder and harder to kick, classic addiction recovery methods do seem to work. It’s as surprising as it is sickening.

Outrage Addiction is Ruining Your Life

Outrage is society’s latest favorite drug. It’s more acceptable than alcohol and more addictive than anything you can swallow, smoke or inject. Because while heroin or methamphetamine are clearly harmful, anger feels so damn righteous.

That’s (basically) how Pete Ross kickstarts his 2020 Medium piece on the injurious phenomenon. Ross was right too. Then and now. Outrage is still all the rage. He’s also right to pair it with heroin and meth. Because outrage’s initial rush will ruin your life with the very same dependability.

Outrage is like a lot of other things that feel good but over time devour us from the inside out. And it’s even more insidious than most vices because we don’t even consciously acknowledge that it’s a pleasure.

Ross again. This time pulling a quote from Tim Kreider, an essayist and cartoonist who’s made a habit of being spot on.

We love being angry, because it makes us feel smart. It makes us feel like we care more than the next person (who we assure ourselves doesn’t care enough), because we’re more across the facts than they are. That we have the necessary ideas to fix everything. That we’re the ones that need to be in charge. That when we call someone a Nazi, or a sexist, or a bigot, it’s not our opinion, it’s a fact. That when we call someone out or worse, try to ruin their career, they deserve it.

He believes behaving that way takes an astounding level of arrogance. We’d like to add ignorance to the equation. Because if the arrogant actually knew just how much their outrage slapped back, they’d surely tone things down.

Then again, maybe they wouldn’t. See, outrage is “a strong emotion and strong emotions force people into action.” In an age of being tethered at home alone, action is worth more than gold. Even if it’s nothing more than screaming obscenities at people from your desk chair.

Outrage is Just the Point

It’s not just a matter of giving an addict more of what they crave; it’s a matter of feeding the crave so they’ll do more of what you ask. Addiction galvanizes people. And outrage addiction can galvanize people to do your bidding.

That’s why political parties whip their supporters into a frenzy of oppositional anger instead of coming together to find solutions, says Ross. It’s also why companies like Nike and Gillette try to stir the cultural melting pot until it boils over.

Nike, you’ll recall, infamously made the then just-banned Colin Kaepernick its momentary corporate face. The move stirred the proverbial pot alright, and sales boiled over by a whopping 31%. Nike also got a $6 billion brand enhancement.

Gillette, in contrast, simply called upon men to be cool. At first glance it seems to be a rather innocuous sentiment; certainly not an offensive one. In an era of #woke though, it was akin to poking a bear with the proverbial stick. Boycotts were threatened, op-eds were written, and Twitter blew up like, well, Twitter. All because Gillette asked men to behave themselves.

“Of course, [that was] exactly what Gillette wanted,” wrote Forbes Senior Contributor Dani Di Placido, “to start a conversation that was doomed to descend into playground insults. Nobody pays attention to anything that isn’t controversial anymore, and Gillette wanted to be a part of the dodgy discourse we see online every day.”

Both Gillette and Nike got just what they wanted. So did the outrage addicts. The difference though was the companies profited at the addicts’ expense.

How is it Working Out for You?

Do you take other peoples’ actions personally? Does what they say often make you mad? Do you click and scroll with self-righteous fury? Are your comments more slap than compliment? Are they meant to box the ears of the whole wide world?

If you answered Yes to any one of the above, Ross has a simple question:

How’s that working out for you?

Frankly, so do we.

Has constantly reading, liking, retweeting and commenting your outrage made your life any better? What’s it actually doing for you? Has it helped you earn more at work? Be better with your family? Made you more fulfilled?

Has it accomplished anything for you whatsoever?

My guess is, it’s just made you even more pissed off and angry. And why shouldn’t it? Spending all your time getting angry about things isn’t going to make you calm and peaceful, it’s just going to result in more anger. If all you ever want to look for is the bad parts of life, how the hell are you ever going to be happy?

Indeed. You hate hunters will get what you seek. Keep seeking and it’ll grow. Until one day you’ll be so consumed by what you love to hate, there will be nothing else.

You don’t actually have to be suffering from outrage addiction in order for all the outrage to cause harm either. Heck, just watching or scrolling news can do it. Especially if it’s partisan news. If you keep clicking from one sad or tragic or maddening story to another, you’ll suffer the consequences.

Ross did himself a favor a few years back. Cut himself off from bad news and social media. He said it was one of the best things he’s ever done. We know just how he feels. We won’t even walk down Bad News Avenue or Troublemakers’ Lane anymore. And if we see someone from those blocks approaching, we’ll immediately cross the street. Like Ross, our life has become increasingly relaxed. We truly feel at ease with the world. Besides, “what’s the point of getting outraged about things you can’t change?”

That doesn’t mean you’ve got to become a hermit though. It doesn’t mean you can’t try to help others either. It simply means focusing on the good instead of the bad, and sticking to more personal-sized issues.

Use [your] time and energy to actively better your life and the lives of those around you. If we interact and speak with the people in our immediate circle in a way that makes them feel happy, valued and important, that hopefully encourages them to make others feel the same. That’s a powerful force for good.

If you don’t do that and instead decide that you want to keep being outraged by everything, your anger is going to consume you. You’ll find that the only people that want to be around you are fellow activists and outrage addicts.

That’s a perilously limiting circle. It’s also a perilously dangerous way to live. Outrage will eventually consume you. Just like heroin or meth. In fact, it may be even worse. Because unlike drugs, you won’t have any of society’s usual stigmas swirling around in your head. That means you’ll have less inhibitions. It’s also means you probably won’t notice the harm it’s causing until it’s too late.

Again, like heroin and meth, outrage addiction is incredibly harmful. Okay, so it might not kill you. But it surely won’t enhance your quality of life. It won’t enhance the quality of your friends’ or family’s lives either. No, not even if they’re also outrage addicts. It’ll simply make you all more miserable spreaders of ever more misery. What? You thought getting mad at people spread joy?

Unlike drugs and alcohol however, outrage addiction can be easily beaten. It can also be prevented. You simply have to change the channel or close the tab. Better yet, shut off the electronics altogether. Take a walk around the block; say Good Morning to a few strangers; smile. If everyone would keep walking that walk, we’d end outrage addiction completely!

Healing Properties has been helping men fight drugs and alcohol for 20 solid years. And while we long ago kicked our outrage addiction (putting happy first is a recovery mantra), we do on occasion get heated. But where others might take heated as an excuse to become louder; we take it as a cue to become better. After all, how we respond is in our control. Give us a ring, we’ll help you master your control too.