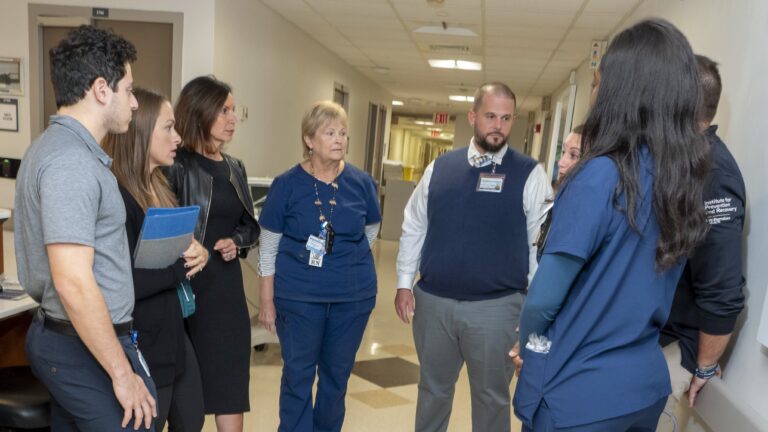 Addicts aren’t the only ones to benefit from peer recovery support programs. The community itself also benefits. And not just the community-at-large either. As Eric McIntire so keenly makes clear, sometimes even the medical community gets their eyes opened by a peer recovery specialist.

All We Need is a Heartbeat

“All we need is a heartbeat, and we have a shot at helping them out.”

That was Eric McIntire talking to New Jersey 101.5 back in 2018. McIntire’s a peer recovery specialist. In fact, he was then the coordinator of the RWJBarnabas Health Peer Recovery Program. He’s now the program’s assistant director.

Consequently McIntire’s used to bright-side views. He’s also used to obstacles. The New Jersey-centric station says he’s “been spit on and cursed at, and splattered with the blood of strangers.” The station also took care to note that McIntire “couldn’t imagine doing anything else.”

McIntire leads a team of 90 peer recovery specialists. Like McIntire, the entire team is sober. (Four years minimum.) Also like McIntire, each is fully committed to helping out people just like them. Every time an overdose patient hits an ER in the seven-county coverage area, McIntire’s team gets the call. A specialist is dispatched and sitting bedside within the hour.

“Nobody realizes how many people you’re helping with every individual,” says McIntire. “You’re stopping the criminal activity… And you’re stopping a family from having heartbreak every two seconds.”

That specialist is also helping to bring families back together — sometimes even their own.

In fact, since getting sober, McIntire remarried the woman he’d previously lost to his addiction, and the couple and their three children are living very happily together.

Though this is McIntire’s fourth year in the Peer Recovery Program, he still vividly recalls his first night. Mostly, he recalls the attitude of the hospital’s charge nurse, which was fraught with unfairness. In fact, the experience remains so vivid that McIntire just included it in a recent Stat News peer recovery feature story.

“Hey,” the nurse said. “Are you the overdose guy?”

She pointed me toward the far corner of the emergency department, where a man lay in a hospital bed.

I glanced over at him, paused, and replied, “Once upon a time, I was that winner. The only difference between him and me was that I was also handcuffed to the bed.”

“When I think back on that night,” he writes, “I realize how much progress we’ve made in increasing access to addiction treatment and support services. I also think about how much more work we have ahead of us.”

McIntire’s first concern is how much the coronavirus pandemic has overshadowed the opioid epidemic. But he’s equally concerned with how much the virus has contributed to a rise in substance use.

Something has to change, insists McIntire. That’s evident. It’s also evident that change should begin by helping people to stop constantly ricocheting between overdose and relapse. Peer recovery does just that. And it does so by fielding a crack team of troops who’ve been there, done that and are intent on never going back there to do that ever again. They also know the best ways to navigate the mine-strewn path that arises once a hospital stay ends.

Perhaps most importantly, implementing a peer recovery program will significantly help change the way an increasingly large block of patients are considered and cared for. That’s not to cast aspersions, mind you. But simply to note that inner bias can sometimes impact even the best-trained and most well-meaning among us.

That’s certainly what McIntire encountered in the ER that night. Fortunately he then got to see the story happily develop right before his very eyes.

“It was a rocky transition,” he writes. “But the initial connections with nurses and doctors eventually became meaningful relationships. We learned from each other, and we continue to do so every day.”

Where Do We Go From Here?

McIntire readily acknowledges that peer recovery programs are “just one piece of the puzzle.” He just wants people to realize that it’s an “important” piece. And that once peer recovery is given a seat at the table, the program can be of enormous help.

“At RWJBarnabas Health, peer recovery specialists have helped our medical colleagues humanize statistics, providing context to care for patients who, frankly, can be incredibly challenging,” he writes. “We conduct system-wide presentations, attend department meetings and nursing huddles, and interact with patients at their bedsides.”

“After only four years,” he continues, “our team of more than 90 full-time peer recovery specialists has become an integral part of the clinical care team.”

That integrating is crucial. It means that McIntire’s peer recovery practitioners are no longer seen as interlopers, but as the specialists that they are. Not just one part of a highly-trained team, but an equal part of that team. Colleagues, if you will. And like colleagues, consequently given concomitant respect.

That respect is trickling down to include the overdose patients themselves, who are benefitting from a systemwide decrease in stigma.

“When doctors work alongside someone who was once trapped in active addiction, they see the underlying truth,” writes McIntire. “That no one suffering from substance use disorder planned or wants to be in that situation, whatever it may look like at the time.”

Being primarily based on social interaction and connection, peer recovery was left especially vulnerable this year. But McIntire and his team of specialists have bobbed when they needed to bob and weaved when they needed to weave. Just like his colleagues in the other healthcare departments. The result? An actual increase in program participants.

“We’ve strived to maintain a sense of community,” writes McIntire. “We’ve donned PPE and continued to engage with patients at their bedsides, speaking hope in their darkest moments. Yes, in-person meetings have transitioned to virtual recovery meetings, and text messages have become a new go-to, but we’ve adapted. Telehealth for instance enables us to offer resources over the phone. So we’re still able to help with everything from housing applications to insurance forms.”

McIntire admits “there’s no replacement for a hug or a handshake.” But he also admits that some restrictions have actually expanded his program’s reach.

“People who were previously unable to attend meetings because of transportation constraints or child care responsibilities now find support through a phone or video call. At our virtual All Recovery meetings, we reach more than 3,000 attendees per month. That’s four times our pre-COVID average.”

Healing Properties applauds Eric McIntire and his entire peer recovery team. All 90 of ’em! We’re intimately familiar with the immense benefits to be had through peer recovery. It’s truly awe-inspiring to see the program practiced at such great extent.

Speaking of which, we also wholeheartedly applaud the great good folks at RWJBarnabas Health. We had a feeling great good would come about once the Robert Wood Johnson Health System merged with the Saint Barnabas Health Care System. But we had no idea just how much great good there’d be. We truly hope that RWJB’s Institute for Prevention and Recovery serves as a blueprint for the nation’s healthcare systems. We also hope to see more and more systems implement something as effective and efficacious as the RWJBarnabas Health Peer Recovery Program.

While we’re at it, let’s applaud New Jersey itself. The Garden State gets a lot of grief, especially from its neighbors in Philly and New York. We think that grief is unfounded. It’s certainly unfair. After all, New Jersey’s own state legislature is behind RWJBarnabas Health’s incredible Peer Recovery Program. And they’ve been behind the forward-looking program for well over four years. Do you have any idea how many lives have been saved as a result? Neither do we. But we know it’s more than enough to get New Jersey off the hot seat.

How about you? Is there a peer recovery program where you live? Do you have access? Do you need access? If so, please give us a call. We’d be honored to unofficially serve in that capacity, at least as far as helping you access whatever help you may need. Seriously.