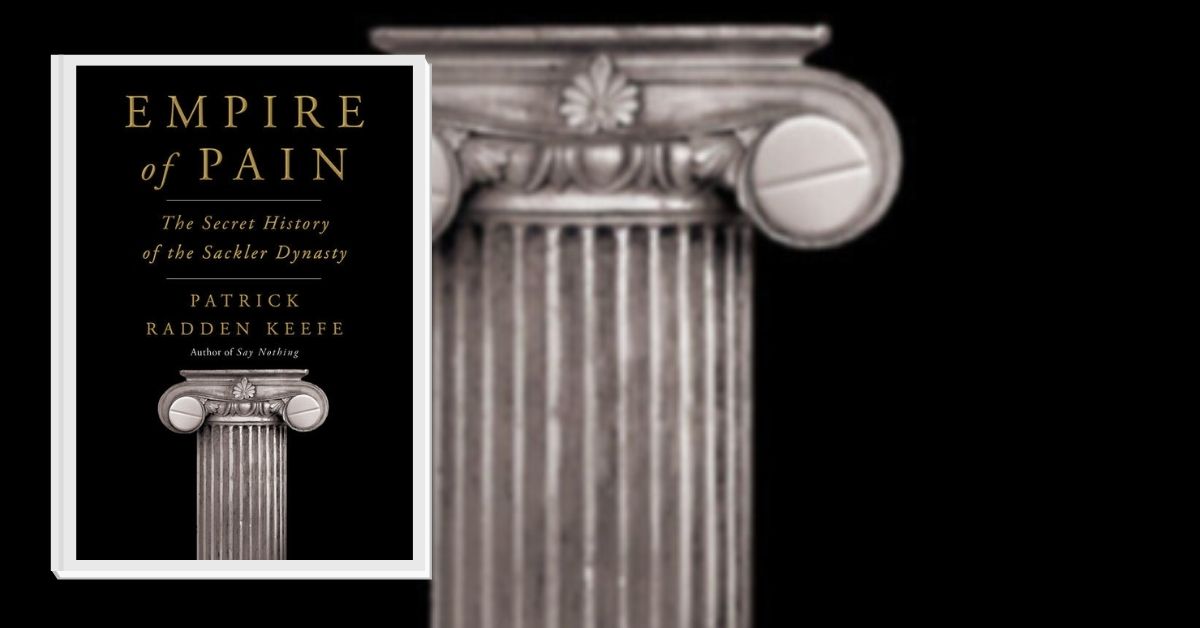 Building an Empire of Pain takes work. Lots of work. There are doctors to bribe. Truths to conceal. Officials to co-opt. Records to cover-up. There’s also a slew of politicians that need to be lobbied, if not into downright complicity, at least into submission. But once you’ve succeeded, man oh man, the billions are yours for the taking.

Many, many billions. Thirty-five of them, in fact. That’s how much money Purdue Pharma reportedly generated from a single little pill named OxyContin. Okay, so it’s not a single little pill. Like most blockbuster offerings, Oxys actually come in a variety of sizes and colors, from 10 milligram Whites to the most sought after 160 milligram Blues. Oxys also come in immediate- and controlled-release variations. When the pill’s catastrophic addiction properties put Purdue on Front Street, the company even added a “tamper-resistant” dose to its menu. While that last attempt at placation may have helped to assuage the FDA (for awhile anyway), it didn’t at all help reduce the addiction rate.

Not even a smidge. It didn’t help reduce the overdose death rate either. By then though, Opioid Road had become far too essential to far too many people to stop using. More to the point, that once helpful access route had now had morphed into a super highway — and there was only one exit.

Such goes the backstory to Patrick Radden Keefe’s Empire of Pain: The Secret History of the Sackler Dynasty (Doubleday). Unlike previous opioid epidemic chronicles, this is less concerned with how painkillers pummeled America, and more about how a single family callously profited from that pummeling. Spurred by a 2017 feature in The New Yorker (where Keefe serves as Staff Writer), Empire also digs deep into the history of that family’s profiteering. Think Faulkner family saga as written by the offspring of Upton Sinclair and Cormac McCarthy, yet with a breeze and a bite that’s 100% Keefe.

Like we said though, Opioid Road was the Sacklers’ road to hoe. But how did that road come to be? Who laid the stakes, charted the course, hired the pavers? And how did it go from simple access road to superhighway of death?

Keefe chronicles it all with the voracity of a Grimm who’s been blessed with the grimmest fairy tale ever. Like all fairy tales, it begins with an initial appearance of propriety (the Sacklers weren’t always evildoers). There’s even a bit of that classic rags-to-riches element for folks to get behind. Mostly though, there’s the cutthroat tactics of a Wizard who’s at odds with anything that interferes with his mad profiteering.

That diabolical operator was Arthur Sackler, one of the three brothers who teamed to make popular the latest in narcotics. Arthur was the advertising genius who helped put Valium into the purses of nearly every American housewife back in the middle of the 20th century. And it was Arthur who paved the way for the family’s Purdue Pharma to reap billions from OxyContin.

Arthur Sackler also applied himself to philanthropy. And he eventually became one of the country’s most benevolent benefactors. His descendants dug the largesse set too. And when Arthur died they divested themselves from the family’s pharmaceutical business so they could keep playing one-up with the very privileged few.

So no, Arthur Sackler’s side of the family wasn’t directly involved in creating the Opioid Epidemic. Arthur’s unparalleled marketeering, however, certainly made the Opioid Epidemic possible. Arthur was the one who first fudged facts, duped patients and paid doctors to play. The family business simply continued apace without him.

In fact, it was exactly one of Arthur’s standard fact-fudging efforts that set the stage for OxyContin’s wrath of death and destruction.

“The plan for mass-market opioids was abetted by misleading advertising, which claimed that less than 1% of patients would become addicted,” reads The Economist review of Keefe’s Empire. When in reality it was really more like 1% wouldn’t get addicted.

“When do we not use this drug?”

Arthur Sackler’s advertising tactics were so successful that the Medical Advertising Hall of Fame‘ awarded him a citation for “bringing the full power of advertising and promotion to pharmaceutical marketing.” They would’ve been more precise awarding him for duplicity and deception.

One campaign encouraged doctors to prescribe Valium to people with no psychiatric symptoms whatsoever:

“For this kind of patient — with no demonstrable pathology — consider the usefulness of Valium.”

Roche, the maker of Valium, had conducted no studies of its addictive potential. Win Gerson, who worked with Sackler at the agency, told the journalist Sam Quinones years later that the Valium campaign was a great success, in part because the drug was so effective.

“It kind of made junkies of people, but that drug worked,” Gerson said. By 1973, American doctors were writing more than a hundred million tranquilizer prescriptions a year, and countless patients became hooked. The Senate held hearings on what Edward Kennedy called “a nightmare of dependence and addiction.”

Senator Kennedy’s probe obviously didn’t dissuade the Sacklers from employing those very same tactics when OxyContin came about. Why would they? What’s a little Senate inquiry against multiple billions in profits?

It’s impossible to measure the extent of death and destruction upon which was built this Empire of Pain. In the first place, the death and destruction not only continues to this very day, but it continues to increase at an astronomical rate. Sure, more and more of the carnage can currently be attributed to fentanyl, yet the path nevertheless traces directly back to the Sacklers’ indiscriminate addicting. Keefe’s Empire of Pain makes that acutely clear.

Clarity isn’t the only thing Keefe’s book has going for it of course. There’s also erudition and insight, as well as the kind of pacing and revelation that makes for great story. Then again, it was written by a great storyteller. There’s good reason why Keefe’s work appears in The New Yorker, Slate, and The New York Times Magazine; just as there’s good reason his previous books (Chatter, The Snakehead and Say Nothing) hit the racks with such universal fanfare… the guy’s the proverbial born storyteller. But Keefe doesn’t just tell good story; he spots good story too. Just witness his “Wind of Change” podcast, which explored a rumor that the Scorpions’ classic track was secretly written by the CIA.

There is one thing bad about Keefe’s book though — two bad things actually. That he had to write it, and that America had to live through what was written. In fact, we’re still living through it. And we’ve no way of knowing when it will ever end.

Unlike Covid, there’s no vaccine. And what antidote there is (naloxone) may help prevent death, but it doesn’t help prevent addiction. Furthermore, the success rate of even the best addiction treatment centers still rarely reaches double digits (on a great day). Add the half million Americans that didn’t get to live through it and, well, the horror is Biblical. Something the Sacklers might wish to consider before whining about having their name taken off a building or of being disinvited to a charity ball.

How about you? Have opioids taken a toll on you or a loved one? Do you (or they) need help? Addiction can be beaten. So can these Sacklers. But first you’ve gotta make the call. So please. Pick up the phone. Change your life. And don’t let those bastards win.

(Image Courtesy The Society of the Four Arts, The King Library, Palm Beach)