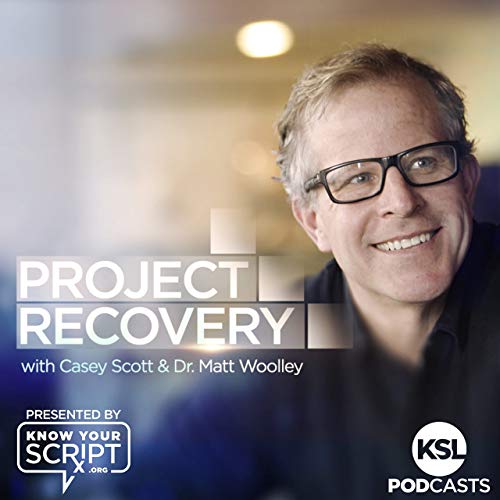 There’s a good reason why it took nearly an entire podcast for Project Recovery host Casey Scott to read his daughter Presslee’s letter. A damn good reason. It was because her letter was the most heartfelt and heartbreaking he’d ever received. It also happened to be the most difficult to get through. First, when he read it to himself. All alone. Then again, when he read the letter on air. But read it he did, for everyone to hear. And to heed.

As you might suspect, Scott stumbled many a time throughout that reading. Many many a time. Sometimes he’d run into a block of silence. Other times the words would drown in his own tears. Mostly though Scott was stalled by the utter disbelief. Had he really done all this to his young children?

Indeed he had. All that and then some. Fortunately, the reveal helped Scott make the proverbial 180. Then it gave him a chance to start cleaning up all the damage — and begin making up for lost time.

Top of the World, Ma!

Once upon a time, Casey Scott had it all. Great wife. Three awesome kids. A successful career. Everyone in his home state knew it too. And they knew Casey. After all, he was perhaps the most recognizable member of KSL-TV’s immensely popular morning show. Scott was the guy who got to do all the fun stuff. The guy who got all the laughs.

Then one September afternoon in 2018, Scott’s entire life smashed to pieces. Worse, so did his children’s. But the smash-up wasn’t caused by some Act of God. (Though an Act of God may have subsequently intervened.) It wasn’t caused by someone else either. (Though a lot of other someone elses were affected.) No, this smash-up came directly from Scott himself — and his indefensible decision to drive drunk.

Scott being one of the stars of Salt Lake City’s number one-rated morning show meant the drunk driving episode quickly became the talk of the town. But there was more to the story than Scott merely driving drunk. See, Scott also had crashed his car. Even worse, he’d crashed his car into a family of four. That’s right. A Mom. A Dad. And two children. Two very young children.

“By the graces of God, nobody died,” Scott says. “It’s not to say that nobody was hurt.”

Indeed. Scott may have survived his injuries. So had the victim family. But Scott’s children? Not so much. See they were
suffering other, deeper wounds. Worse, his kids were suffering in public. After all, the family’s darkest secrets were now being spread across the air for the entire community. If things were painful to live with before the crash, when Daddy was just a drunk (and they most decidedly were), imagine how much they hurt now that Daddy had run down a family while he was drunk. The whole town seemed to be whispering behind the kids’ backs. Heck, simply going to school meant being subjected to a barrage of ridicule.

Then one day, when Scott was feeling especially sorry for himself, he asked everyone to give him a break. “Look at all I’ve been through,” he said.

His daughter Preslee, in utter disbelief, turned to him and said: “Really, Dad? You think you’re the only one who’s gone through this?”

Those words hit Scott hard. And rightfully so too. In fact, they were enough to compel him to drop the self-pity. They also helped Scott take a deeper look into himself. Especially at that whole man-of-the-hour image he’d cultivated. For years Scott had been the go-to guy for all the morning show’s antics and laughs. It got so folks never knew what Scott would do next. Quite often frankly, neither did he. And that surprise-soaked zaniness had become a large part of Scott’s success.

It also helped lead to his downfall. Scott simply couldn’t turn himself off. He just had to be funny. People expected it. He expected it. Each and every day became a case of hilarity ensues. And if he wasn’t feeling particularly funny, alcohol worked wonders. In fact, drinking eventually became what helped him achieve all that hilarity. Big time.

Drunk every day and pushing for funny, Scott had no idea just how much he was harming his family. Not till they actually told him anyway.

So Scott got even more serious about his recovery. The dives came deeper; the reveals all the stronger. The work strengthened his intentions too. Not just his intention to succeed in sobriety, but his intention to come out better for the effort. Mostly though, Scott intended to right his ship. And then to have his family come back aboard.

Teaming with Dr. Matt Woolley for the Project Recovery podcast took care of the professional part of his life. His daughter Presslee’s letter largely took care of the personal. Well, it did a lot to start cementing the process anyway. A whole lot. For him, as well as for her.

The letter came about as an English assignment. Scott’s eldest daughter Preslee’s class was assigned to pick a pivotal topic and then write an essay about it. “It was just a personal narrative about something that changed our life,” Preslee explained to KSL-TV reporters Aley Davis and Debbie Worthen.

Unlike some of her classmates, Preslee knew exactly what she wanted to write about. Then again, after years and years of enduring one unavoidable story, she did have plenty of reasons. Presslee also had plenty to write about. “I was kind of excited to write everything down because I’d never written anything or talked about it really to anyone before. It was kind of like my way of releasing it all.”

Presslee never told her father about the assignment. Perhaps she didn’t want to. Perhaps she thought she didn’t need to. Or maybe she believed he didn’t deserve it. Whatever the reason, Scott didn’t know a thing about the paper till it had been handed in.

“[Presslee’s] English teacher reached out to me and said, ‘Your daughter wrote this pretty amazing thing,'” Scott recalled. Then he asked his daughter if she’d show him the paper.

“I read it by myself for the first time and I bawled,” Scott told the KSL tagteam. “It was too raw, too real. It was like watching a scary movie. I got up, put it down and walked away, collected my thoughts, came back, and sat down and finished it.”

Scott eventually composed himself. Then he decided others needed to hear the power of Presslee’s words. So he stepped up and read the narrative on the Project Recovery podcast.

Healing Properties salutes Casey Scott and Dr. Matt Woolley and their Project Recovery podcast. The two not only compellingly address a very vital topic, but they do so at a most critical time. If we don’t finally get a handle on the addiction epidemic, it’ll soon be reaching pandemic proportions. We also offer an extra — and extra special — salute to Scott himself, both for his sobriety, and for the courage he’s shown by going public with his recovery. Getting sober is hard enough. Doing it before the whole wild world has gotta be even tougher. But he’s definitely got the right bright idea.

“Project Recovery will not fix you,” Scott told Deseret News reporter Lois M. Collins. “I don’t claim to have all the answers. But I believe you can fix you, with the right tools, the right mindset and the right framework. I think you can recover. You can learn to live a life.”

And a damn good life at that!