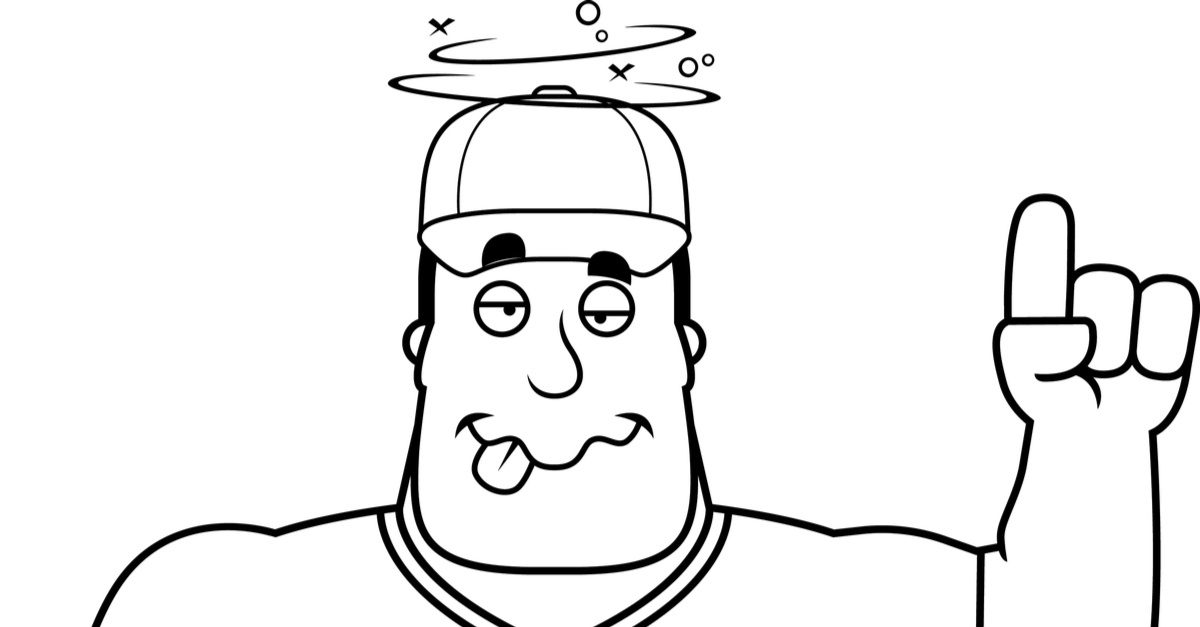 Ray Caldwell is best remembered for three things: his hard drinking, his spitball, and his being struck by lightning while on the mound. Many however believe he could’ve been remembered for just one thing: being one of the greatest pitchers in Major League Baseball.

That of course never happened. Caldwell’s drinking made sure of that. In fact, Ray’s drinking was so unavoidable the Cleveland Indians tailored his contract around it. Oh, it wasn’t that the team wanted him to stop drinking, mind you. In fact, on Game Days he was contractually bound to go out and get plastered. The team simply wanted Ray to be sober enough to pitch before he got sloshed.

For any other player, that kind of contractual shenanigans would be cause for intense notoriety. Not so Caldwell. Then again, lightning strikes do have a knack for overshadowing pretty much everything.

The Legend of Ray Caldwell

Yep, in a fight between liquor and lightning, lightning will win every time. Not even white lightning can hold up against an actual lightning strike.

That’s what ESPN Front Row ace Ryan Hockensmith must’ve found out when he was digging into the legend. Hard-drinking Major League spitball pitchers might number a dozen or so, but those who’ve also been struck by lightning and then returned to complete a game, well… Sure Hockensmith really only has Ray Caldwell as evidence. Nevertheless, what evidence he’s got. And what great, good story he makes of it too.

The tale takes place some 121 years ago, almost exactly to the day, recounts Hockensmith. The weather is brutally hot but clear — for now — and none of the 20,000 or so fans at League Park has any idea that they’re about to see something that defies belief. A story of desperation, terror, survival and redemption, all channeling through Caldwell.

Game of a Lifetime

“Caldwell has his best stuff today.” Good thing too, because he’d “just been waived by the Red Sox and the pulse of his once-promising career had all but flatlined.”

Indeed, over the last five years Caldwell’s hard-drinking had driven him from “transcendent talent, perhaps [even] one of the greatest pitchers ever,” to “the outskirts of baseball”. In a push for the playoffs, “Cleveland player/manager Tris Speaker wanted to give the man another chance.”

This was his last gasp.

Caldwell had held the Philadelphia Athletics to four hits and a walk through eight innings. Three more outs and he’d have his much-needed win. Then “the clouds roll in — fast — off Lake Erie. Cleveland’s players, who have grown accustomed to the lake-effect weather mood swings, take their positions and hope to grind out three more outs before the skies really open up.”

Two easy infield pop-outs open the inning. One more to go. Now the wind howls, the storm fully opens up upon the field.

Caldwell gets set. Then “a flash from the sky explodes down into the middle of the field. Players dive to the ground.” Cleveland catcher Steve O’Neill throws his metal mask as far as he possibly can.

“I didn’t want it to attract any bolts toward me,” he says later.

Five seconds after the bolt hits the ground, the Indians look around. The eight position players are OK. Their newest teammate is not. Not even close. In fact, Caldwell is on his back, arms spread wide, out cold on the mound.

The lightning strike had hit him directly.

Players rush over. Caldwell’s chest is smoldering from where the bolt burned it.

Caldwell pitched right-handed and hit left, recounts Hockensmith. In 1910, he was pitching for the New York Highlanders, who became the Yankees a few years later. He went 32-38 his first four years, playing for bad New York teams. In fact, at one point Caldwell threw 52 consecutive scoreless innings in which his teams didn’t score either.

But in 1914, at age 25, Caldwell went 18-9 with a 1.94 ERA for New York and was tabbed as an emerging superstar. The great Grantland Rice even sang his praises. Then the wheels began to fall off. He had significant drinking issues, what newspaper columnists of that era tabbed “irregular habits” or “outbreaks of misbehavior.” And he’d been repeatedly fined, suspended and released accordingly.

Caldwell had also been re-signed almost every time. When the Yankees re-recruited him in 1917 “the team decided to hire two detectives to trail Caldwell 24 hours a day. When he consistently managed to slip his tail, the Yankees gave up and released him.”

He signed with Boston in 1919 seemed to be doing well. “On road trips [though, the Red Sox inexplicably bunked Caldwell with Babe Ruth,] a 24-year-old superstar who also would develop a penchant for ‘outbreaks of misbehavior.’ The team quickly realized that the pairing was a disaster and cut Caldwell in early August.”

Deal of a Lifetime

Then “Cleveland offered him a deal historians now say ranks among the most bizarre in baseball history.”

“On game days, Caldwell was to pitch and then go get plastered.” That’s it.

Historian Franklin Lewis’s The Cleveland Indians says Caldwell was a bit perplexed by the contract.

“You left out one word, Tris,” Caldwell said to his manager. “Where it says I’ve got to get drunk after every game, the word not has been left out. It should read that I’m not to get drunk.” [emphasis added]

Speaker smiled. “No, it says that you are to get drunk.” [ibid]

Speaker then explained a very specific regimen Caldwell was to adhere to every week. On game days, he’d pitch and then perform his mandated drinking duties. He was then free to skip coming to the ballpark the next day and sleep off his hangover. But two days later, Speaker wanted him at the ballpark early to run as many wind sprints as the manager thought he needed. Three days after every start, Caldwell was to throw batting practice. Pitch, drink, sleep, run, BP, rinse and repeat.

Historians believe Speaker, a true innovator as a player/manager, thought Caldwell’s talent was worth the strange risk, writes Hockensmith, and that by giving him a free pass day of unrestrained drinking, Caldwell might be able to stay on track the other three days of a pitching cycle.

“I can’t imagine anybody offering a deal like that today,” baseball expert Steve Steinberg told Hockensmith.

Frankly, neither can we here at Healing Properties. We do though see a similar mindset between that of Ty Speaker and the managers of today. Speaker didn’t throw Caldwell out on his ear. He didn’t baby him either. He treated him with the respect due any talent, with or without a substance abuse problem, then added the understanding necessary when afflictions are present. No, he didn’t send him to rehab. Then again, early 20th century rehab usually meant a hospital’s drunk ward. But he did give him a fighting chance. And in the end that’s all addicts and alcoholics are really seeking.

What happened to Ray Caldwell after that lightning strike laid him out on the mound? Well, Ray picked himself up, brushed himself off and got up to get the last out necessary to win the game. It’s a great ending to a great story. And it’s something that would’ve never happened had the hard-drinking spitballer not found someone to believe in him.

If you or someone you know needs help with drugs or alcohol, please give us a call. We’d like to help get you the help you need.