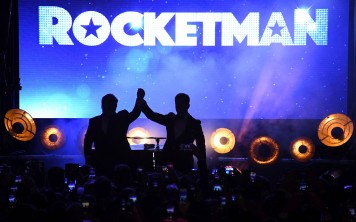 A Recovering Addict Looks at Rocketman

Recovering addict Vic Vela took a good hard look at Rocketman and was often driven to tears. He also found a lot of hope.

Vic Vela doesn’t “know anything about being a famous rock star or having millions of dollars.” He doesn’t know anything “about writing songs that people sing in the shower or perform at weddings or anything like that” either. But there were moments in the movie Rocketman where the recovering addict was Elton John. And, Vela says, he “often wept because of it.”

One scene in particular moved the Colorado Public Radio broadcaster to tears. John was all alone in his house, chugging booze, snorting fat rails of cocaine and muttering nonsensically to himself while pacing around the room.

Yes, that’s right. The very man who wrote “Your Song,” one of the most “timeless and delicate love ballads” ever, had been reduced to “a lonely, paranoid, angry junkie.” It was not a pretty sight.

Then again, it wasn’t meant to be. Rocketman was meant to be a brutally honest look at how addiction can take down anyone — even a global superstar like Sir Elton John. And that’s largely what it was. John’s story is the same as Vela’s story is the same as millions of other stories. And, says Vela, “it’s one that can help people understand the torment of those who struggle with substance abuse.”

An Addict is Born

Vic Vela knows a little something about the depravity and isolation of cocaine addiction. He spent two decades drinking hard booze and doing hard drugs just about every day. While Vela was indiscriminate in his intake, he insists cocaine was his “longtime drug of choice.”

“I would be a charismatic chatterbox during happy hour,” he says. “But when I wanted to get high, I was done with you. I would adjourn to an empty apartment, close the curtains, and snort blow or smoke crack alone, often until the sun came up.”

“When you’re fueling yourself with booze and blow every day,” adds Vela, “you’re not at your best spiritually.” You can’t be. And Rocketman perfectly illustrates that truth. In fact, John is often a hot mess in the movie.

The film is upfront about the wreckage John “created through years of selfish, childlike outbursts and drug-fueled maniacal highs and lows.” And each and every scene hit Vela hard.

“I was reminded of the times I’d blow up in public or at work,” he said, “often strung-out and sensitive to the slightest provocation. I argued with cops and started fights at sporting events. Everything was a battle. It was exhausting.”

Like John, the roots of Vela’s addiction began long before he ever drank or used drugs. And like John, Vela knew he was gay at a very young age. Unlike John, however, Vela’s dad cared about his son. He also stuck around.

“My dad would give you the shirt off his back,” said Vela. “But he was also often a heavy, miserable drinker.”

“I was kicked out of almost every class I stepped foot in for blowing up at teachers,” he said. “I barely [even] graduated high school.”

Yep, you guessed it. Vic Vela is sober. Very sober. Just like Elton John. Okay, so Vela’s only got four years to John’s nearly 30. So what? The point is he’s happy, productive and free. Just like John.

But this recovering addict has also become a beacon of hope in the recovery community. Just like John. And just like Rocketman.

Rocketman‘s “best scenes come in the end,” says Vela, “when Elton strips away his outrageous costumes, and is now sitting in a recovery circle, baring his soul in a pedestrian jumpsuit. He’s even seen mopping the floors of his rehab center.”

“That’s how recovery starts,” he adds. “We allow ourselves to be vulnerable and trade in our egos for some humility.”

It’s also how life begins. Really begins. Hey, if it works for superstars such as Elton John and Vic Vela, and it’s worked for thousands of men here at Healing Properties, it’ll certainly work for you. Why not give it a try?