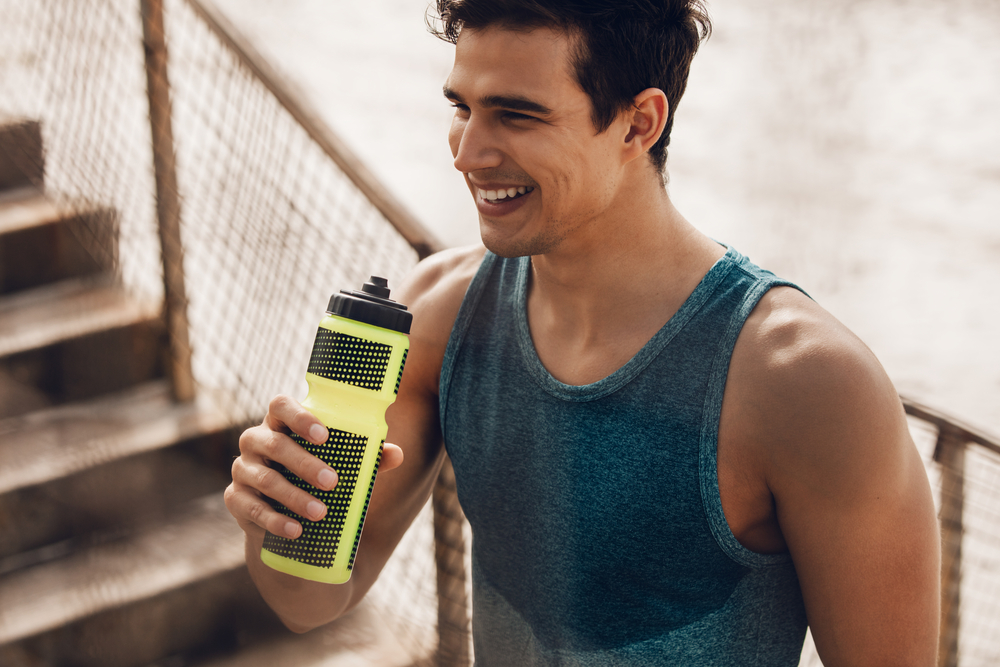 Rehab Richie was soaked. His Yankees cap was ringed with a halo of sweat and his Pegasus 38s looked as if they’d been through a mud puddle — or you-know-what’s creek. Even his clothes were drenched and dripping off his slender frame. Yet he never looked happier.

The guys surrounding Richie looked pretty slap happy their own selves. Bright eyes, glowing faces, huge smiles. Sure, they were equally drenched. Head-to-toe in some very serious sweat. But they didn’t seem to mind a bit. It sure didn’t stop them from draping their arms across each others’ shoulders.

What was the deal? The last time Rehab Richie had a smile that wide was when he had an 8-ball of “H” in one pocket and a syringe in another. It also happened to be deep in the dark of night. And outside a bar at that. Yet here he was at what seemed to be a park. In broad daylight. Grinning like a madman. Could he and his crew be out there getting high?

Nope. Not even close. Oh, Rehab Richie and his newfound friends were high all right. Good and high. But not from drugs. And not from alcohol. In fact, they were actually out there campaigning against getting high on drugs and alcohol. And they were investing some serious sweat equity into the campaign too.

See, the lads had all come out to take part in the 9th Annual Jersey’s Walk/Run for Recovery. And they were running for their lives.

Jersey’s Walk/Run for Recovery is where Mercer County’s increasingly vocal recovery community takes its annual stand against addiction. Oh, it’s not that the community doesn’t take a stand the rest of the year; it’s just that the Walk/Run is where that stand gets the most visibility. Then again, when a cause has an outfit like Recovery Advocates of America backing its play, people are bound to notice.

Recovery Advocates is Mercer County’s addiction and recovery go-to organization. If it concerns substance abuse, and it occurs in the Capital County, RAA is on it. They’re technically a “not-for-profit peer-to-peer center” that provides the necessary know-how. In actuality however, they’re the A-to-Z of community engagement. If Recovery Support is called for, RAA will call in the troops, whether it’s for the lone addict or the whole family. If need be, they’ll even stage an Intervention, this way there’s something to support. Best of all, RAA is funded by grants and donations, so all their services are gratis.

But RAA goes beyond directly helping the client and their family. Well beyond. Though at the end of the day, the efforts do end up serving the same purpose. We’re talking about the CARE Program, a county-wide community engagement effort the Robbinsville Township Police Department launched back in 2016, and which RAA liaisons with to this day.

When RPD started CARE, it put a name on the drug diversion program that by then had become standard operating procedure throughout the force. On-duty officers were already steering qualified arrestees toward treatment rather than jail; CARE gave the Department an opportunity to make it official.

CARE is a tremendous asset to the community. It also should serve as a blueprint for counties all across the country. That’s obviously why Rehab Richie and his pals were smiling so widely. Each and every step they took in this year’s Walk/Run for Recovery helped CARE for their community.

Rehab Richie earned his name the hard way — by living up to it. Rehab after rehab after rehab. Rinse and repeat. For the past 10 years he’d been in and out of more rehabs than anyone had nerve enough to count. Anyone other than the insurance company anyway, who finally got tired of the never-ending revolving door and killed his parents’ policy.

But not before Rehab Richie could milk that policy for even more than it was worth. New Jersey, New York, Colorado, Florida. If the state had a rehab and a good rep chances were good that Richie had treated there. Most times at least twice. He’d even gone all the way to California to some fancy-schmancy oceanfront recovery spa. And no, that didn’t work either.

A decade of rehabs can wear on a person, even a person named Rehab Richie. It can also wear on a person’s family and friends. And Richie had worn everyone ragged. Hell, he even wore out his own drug dealers. And when a hardcore addict gets to the point when even his drug dealers are done with him, well, he’s pretty much done in.

When that last and final rehab gave Richie the boot, he was definitely done in. But what to do? He had enough money for one more quick run, but then he’d have nowhere to sleep. And if he put the money to a hotel room, he’d be kicked to the curb within two or three days. Thankfully, he wasn’t sick. Because that would’ve indeed been that.

Richie sat outside the treatment center weighing the pros and the cons and the maybes and the what-ifs, yet never came up with a solution. Then he did something he hadn’t done in a good many months — he called his sponsor.

Richie’s sponsor was named Chuck. And Chuck was as old school as they came. If you wanted sobriety, Chuck would shift the wind to help you. If you were playing games, he’d cut you loose. He didn’t judge. He didn’t preach. And he didn’t hold a grudge. He was simply all about sobriety.

Chuck happened to be about to leave for a meeting at Delray Central House. He asked Richie if he’d like to come along. Richie said Yes.

Meeting of the Minds

Then Chuck told Richie about Healing Properties. In fact, Chuck took Richie over to the property and introduced him to two of his sponsees. Then he introduced him to Jun, who’d been Property Manager for years. Once Jun saw Richie’s head was in the right place (and that he had Chuck to help keep it there), Richie got the green light to move in.

Richie didn’t leave until the day after celebrating his Two Year Sober Anniversary.

Seems Chuck, Central House and Healing Properties combined to provide Richie with the stability necessary for sobriety. They also provided a blueprint for how to live a full — and fulfilling — life. Sober, yes. But also forthright and well-meaning. The kind of life a mirror won’t crack over.

And just the kind of life Richie’s family and friends would welcome with warm and open arms. Richie’s mother and brother had flown down from New Jersey to help celebrate his Two Year Re-Birthday. Richie flew back with them that next day. He’s been back in his hometown ever since.

And what a perfectly named hometown it is too. Hopewell. Two of the best feeling four letter words in the world. They’re two of the most apropos words too. Because without hope, Richie would never have done so well. It’s a notion Richie reminds himself about each and every day.

Healing Properties congratulates Rehab Richie. Three years of sobriety is a real milestone. He should be proud. He’s also earned the right to revert to his true name. So let’s just call him Richie from here on out.

We’d also like to thank Chuck and all the other sponsors out there. Without your tireless efforts, there’d be very little sobriety. And very few folks would comes back from the brink. We’ve great gratitude too for Recovery Advocates of America. It’s great good groups such as theirs which helps recovery come alive in our communities, so that those in our communities can stay that way. A special Thank You too for the Mercer County Prosecutor’s Office, co-sponsor of the Run/Walk, as well as the Robbinsville, West Windsor and other Mercer County Police Departments who are putting CARE to practice. The more our entire communities get involved in the fight, the better the chances our entire communities will emerge victorious.

What about you? You ready to win? You want to glow like Richie and his pals? Have you decided it’s time to start celebrating your own sober birthdays? It’s all possible you know. Entirely possible. All you’ve gotta do is call. So please. Take the next right step. Pick up the phone. Change your life. Who knows? You could easily be the next person leading the way.