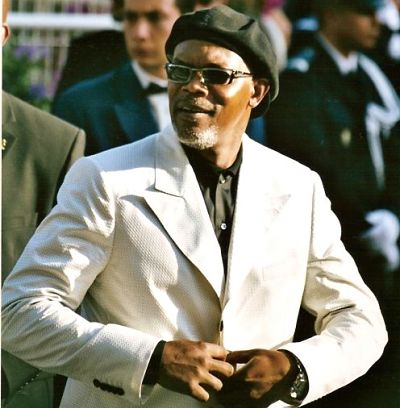 Leave it to the keen, cool folks at Vanity Fair to come through with a book excerpt the whole wide world is gonna wanna read. And leave it to the world’s keenest glossy to make it one of this age’s ultimate GOATS. We mean Samuel L. Jackson, dig? And we mean Gavin Edwards’ book Bad Motherfucker.

Truth be told, we really don’t need to say more. We will though. Not because Lord Jackson needs our chatter, mind you. Not one bit. We’ll say more because we really can’t help ourselves. Samuel L. Jackson just makes us wanna rave, rattle and roll!

We’re not the only ones swayed by Sir Sam, of course. His fans are more than many. And they are legion. They also apparently include Gavin Edwards. After all, why else would the highly-accomplished author/journalist go to such full lengths? Why else indeed.

Subtitled The Life and Movies of Samuel L. Jackson, the Coolest Man in Hollywood, Edwards’ homage is clearly on the right side of history. That is, it’s on Samuel L. Jackson’s side. His book also clearly aligns with his previous homages, including nods to both Bill Murray (The Tao of Bill Murray) and Mr. Rogers (Kindness and Wonder). Mostly though, Bad MF gives us all another terrific reason to re-immerse ourselves in the life and the work of a bona fide celluloid demigod.

Samuel L. Jackson’s friends called him King of the Cameos, because he rocked a bit part in just about every movie made in late ’80s New York. He also rocked a mean crack pipe. Oh, Jackson didn’t call it crack. He called it freebase, because he cooked up the powder himself. But it was crack alright. It was also the reason he kept only landing drive-by roles.

Fortunately Jackson had Spike Lee. And Lee had his Summer Film Camp.

“That’s what Samuel L. Jackson called the annual experience of working on the director’s movies,” writes Gavin Edwards. “At the time, Lee filmed his movies once a year, always in the summer, hiring mostly the same cast and crew.”

Jackson, natch, was a core part of Lee’s inner circle, and he had been since 1989’s Do the Right Thing. In fact, it was while shooting Lee’s third feature that Lee’s freebasing may have been most rampant. Fortunately, Jackson had the FM 108 We Love Radio DJ Booth to hide behind.

“Half the time I’d be in there sleeping, because I’d been up pretty much the night before, fucked up, hanging out with my friends,” he told Edwards.

Jackson showed up at 1989’s Summer Camp with a cane and leg brace, courtesy of an NDE after attempting to help a woman on the NYC subway. And while the injury didn’t prevent him from doing what Lee needed for Mo’ Better Blues, his role was still rather marginal.

Jackson was beginning to get puzzled — and pissed.

“You feel like you’re on the same level talent-wise and you go to an audition and you know you rocked it, but you didn’t get it, and you wonder why,” Jackson said.

Perhaps that’s because Jackson “would go to an audition [with] eyes a little too red or [smelling] like that beer [he] drank before” he arrived.

That’s kind of what writer and film producer Nelson George thought after running into Jackson in Midtown Manhattan right around then.

“I didn’t really know at the time that he had a drug problem,” George told Edwards. “But he didn’t need to tell me. I could see: he looked feral.”

“I was a fucking drug addict and I was out of my mind a lot of the time, but I had a good reputation,” Jackson insisted. “Showed up on time, knew my lines, hit my marks.”

Then Jackson’s wife and eight-year-old daughter found him passed out on the kitchen floor after a night of hard-partying. In his hand was the cocaine he’d cooked the night before. Jackson had been too drunk even to smoke it.

His wife, LaTanya Richardson, had him in rehab within 24 hours.

Jackson hated it. Hated the head-fuck peers and the tough love counselors. He didn’t hate the learning though. Getting the deep dope on excess and inheritance and acknowledgement.

“I never thought I was an alcoholic; I just drank all my life,” quotes Edwards. “But I was a blackout drinker: I would wake up in places and not know how I got there.”

Then Jackson “learned to pray for the strength he needed to not drink or take drugs:”

“I found the humility I needed to get down on my knees.”

While Jackson was in treatment, Lee was prepping to shoot Jungle Fever, which happened to include a crackhead named Gator Purify. It was a role “Jackson very much wanted to play.”

Lee wasn’t so sure. His counselors were adamantly against it. Jackson persisted nevertheless. “I’ve done all the research, so I know I’m gonna be good,” Jackson assured Lee.

Jackson was wrong. He wasn’t just good; he was outstanding. So outstanding in fact that the folks at the Cannes Film Festival invented a category just so they could give him an award.

“Once Jackson was clean,” writes Edwards, “he realized how much he had been cutting himself off from his own talent: Gator was the best work he had ever done.”

Few actors deserve praise more than Samuel L. Jackson. That’s clear. It’s also clear that few actors deserve more praise than Samuel L. Jackson. After all, he’s one of the most accomplished actors on the planet, as well as one of its most revenue-generating. But while his career has been at once entertaining and exemplary (and good for the economy), it is Jackson himself which deserves the highest praise. For he’s spent his life effortlessly providing us all with a perfect example of how to be cool.

Of course, Jackson never set out to do such a thing. That’s what makes it — and him — so cool. That’s also what makes Gavin Edwards’ Bad Motherfucker so welcome. We all wanna know Jackson’s secrets. Because “The Coolest Man in Hollywood” just may also be the coolest man in the whole wild world.

Healing Properties wholeheartedly thanks Gavin Edwards for giving Samuel L. Jackson the full-length homage he deserves. It’s great that we now have an ace writer’s portrayal to enjoy — and to learn from. We also thank him and Vanity Fair for running such a kickass excerpt (and hope they’re cool with us pulling a few snippets). We recommend heading over and reading the entire edifying piece, and then popping for the whole book. An ace scribe, an edifying glossy, the coolest cat… that’s a winning trifecta on any track.

How about you? Have you been hitting the pipe? Are you still justifying crack by calling it base? Would you like to move on with your life? Really move on? Like not-wasting-your-time-chasing-an-ever-evaporating-high moving on? Then please, give us a ring. It just might save your life.