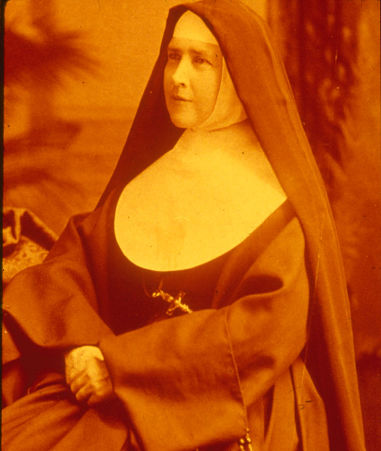 Sister Ignatia was a woman of deep and unwavering faith, but she wasn’t a nun. Yes, she was formally addressed as Sister. But that appellation came about because she was what’s called a “Religious Sister.” That means, instead of living the nun’s cloistered monastic life of prayer, she ministered to the needs of society. In other words, Sister Ignatia took her work to the streets.

Those streets were in Akron, Ohio, circa 1935, where Sister Ignatia was the admissions charge at St. Thomas Hospital. Like all hospitals at the time, St. Thomas didn’t treat “drunks.” But one of their doctors did. In fact, he himself was a “drunk.” His name was Dr. Robert Holbrook Smith. Otherwise known as Dr. Bob. And when when Dr. Bob diagnosed a fellow drunk with acute gastritis, Sister Ignatia had all the ammo she needed to sneak him in for treatment.

That patient was the first in the world to ever be medically treated for alcoholism. He’d also be the first of many, many millions who’d go on to find a new lease on life through the efforts of an organization called Alcoholics Anonymous.

Sister Ignatia’s work not only predates the founding of Alcoholics Anonymous, it also includes many of the group’s much-coveted traditions. She was the first to institute tokens to mark a patient’s sobriety (in her case, a Sacred Heart of Jesus medallion). And she was among the first to recognize the importance of coffee throughout recovery. In fact, when Sister Ignatia was transferred to Cleveland’s St. Vincent Charity Hospital, she was adamant that administrators add a coffee bar to the alcoholic ward. And anyone who knows anything about A.A. knows the pivotal roles both chips and coffee play in the organization’s operations.

Sister Mary Ignatia continues to be a beacon for alcoholics everywhere. In addition to being the undisputed guardian Angel of Alcoholics Anonymous, her name lives on atop St. Thomas Hospital’s Ignatia Hall. That’s right, over 80 years later, alcoholics are still being successfully treated for the disease in the very place where it all began.

St. Thomas Hospital, along with Akron City Hospital, is part of the Ohio’s non-profit (and highly-regarded) Summa Health System. Both hospitals also happen to be where the esteemed Dr. Bob presided way back when. And that gives the two institutions a very special place in the history of A.A., as well as in the hearts and minds of A.A. members everywhere.

In addition, Sister Ignatia was honored for her service at St. Vincent Charity Hospital in Cleveland, where a portion of that city’s East 22nd Street has been renamed “Sr. Ignatia Way.” She’s also a recipient of the Theta Phi Alpha fraternity’s Catherine of Siena Medal in honor of her “outstanding achievement in one of our major problems affecting our country today — alcoholism,” and is an inductee in the Ohio Women’s Hall of Fame. Sister Ignatia’s highly-regarded work alongside Bill W. and Dr. Bob is also the subject of Catherine M. Oneill’s play Sister Anonymous.

Sisters of Charity of St. Augustine

No less a guiding light than President John F. Kennedy recognized Sister Mary Ignatia. In fact, the then president did so in a personal letter. Ever the humble servant, Sister Ignatia accepted the letter on behalf of her congregation, the Sisters of Charity of St. Augustine. The Sisters have served the health, education and social service needs in the Diocese of Cleveland, Ohio, since 1851. In 1922, the Sisters opened St. Thomas Hospital in Akron. It is there where Dr. Bob and Sister Mary Ignatia would set the stage in treating alcoholism as a medical condition.

Healing Properties would like to recognize the noble works of Sister Mary Ignatius and the Sisters of Charity of St. Augustine. Not only did their efforts change the ways the world sees alcoholism, but they enabled a way for the world to treat alcoholics. That they did so with both respect and dignity only makes those efforts all the more admirable — and leaves us that much more grateful to boot.