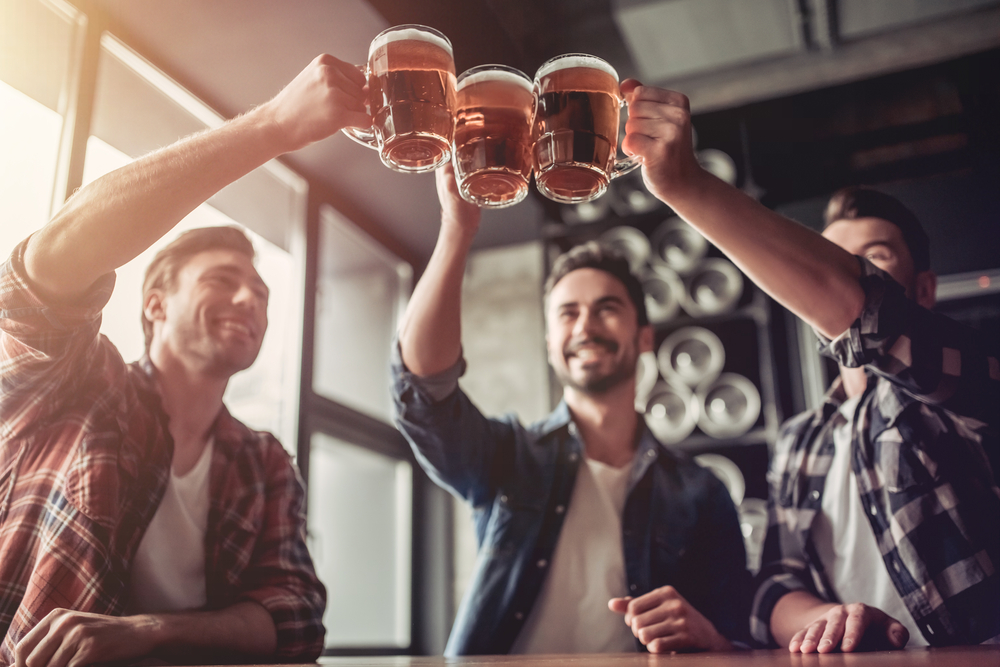 Is There Such Thing as a Sober Buzz? Non-Alcoholic Beer in America

These aren’t idle questions. Quite the contrary. Even the idea of a sober buzz could be a trigger. The idea of bar-hopping — let alone the practice — could trigger a shoot-out of dire proportion. Think about it. Back in the bar after umpteen years; confronted with a legion of old bad friends. The notion is enough to get some problem drinkers good and drunk.

Then again, it could also be just another wrung in sobriety’s ladder. One more inevitable step to take on recovery’s never-ending journey. You’ve taken similar steps before — the dinner party, the football game, the corner store. You took them successfully too. So there’s really no reason you can’t successfully take this step as well.

This step however does also put something into your hand. The issue is whether that something will fizz like a neutered beer — or go off like a stick of dynamite.

When a long sober John Seabrook sidled up to the bar, the something slipped into his fist a little differently. Oh, that said something was still both banal and dangerous alright. But it also served as a most perfect metaphor.

Let’s let him tell it:

I had not raised a pint drawn from a keg since I quit drinking alcohol, exactly one thousand eight hundred and eighty-eight days earlier. The glass seemed to fit my palm like a key.

And there, in two perfect little sentences, lies an entire world of untold promise, unforgotten fear and out-and-out risk. The alcoholic’s world. After all, a person doesn’t spend over five years counting days unless counting those days truly counts. And they surely don’t equate a glass with a key unless that glass might open a world of hurt.

Or of hope. Seabrook isn’t a masochist. (Not that I know of anyway.) He didn’t go into that taproom to hurt himself. He went in to taste a fond memory. He also went in to find out if that taste could come without repercussions.

I won’t spoil the story. The writing is too damn good for everyone to not read it for themselves. I will tell you the piece is called “An Ex-Drinker’s Search for a Sober Buzz” and that it appears in The New Yorker. I’ll also tell you that its subtitle pretty much spells out the quest itself.

Can the booming market for non-alcoholic drinks offer a safe way to return to the bar?

Read Seabrook and find out. You shan’t be disappointed.

The End of Near Beer

Near beer (that is, beer containing up to 0.5 per cent alcohol by volume) has its roots in Prohibition. But it became something of a punchline when Anheuser-Busch hit the market with O’Doul’s. In fact, its derision was probably why the Non-Alcoholic Beer market remained relatively dry.

Well, N.A.-beer people, it’s time to rejoice, for Seabrook says “these are hoppy times.” Heck, he claims “the Total Wine & More chain of superstores carries biscuity stouts and hops-forward I.P.A.s from more than a dozen N.A. craft brewers.” Even more impressively, the list of brews — which includes Athletic, Partake, Bravus, Surreal, WellBeing, and Brooklyn Brewery’s Special Effects — has sprung up over the last five years. Granted the U.S. N.A.-beer market is still tiny. But it’s growing faster by the day.

And by the meeting. Back to Seabrook.

A psychiatrist friend who is a twenty-year veteran of A.A.’s twelve-step program, which he credits with saving his life, said “non-alcoholic beer is for non-alcoholics,” a line I had heard in “the rooms.” It was like playing Russian roulette with your sobriety, even if the bullet in the chamber was a blank. He also reminded me, as people in recovery say, “If you hang around the barbershop long enough, you’re going to get a haircut.”

Is that so? Again, you’ll have to go to Seabrook for the answer(s).

Healing Properties believes there just may be healing properties in Non-Alcoholic Beer. We also believe it could be a dangerous game to play. But that’s the same with pretty much everything. It’s up to the person, the place and the thing.

We do know that the market for Non-Alcoholic Beer is there. And that it’ll be there, growing ever larger, as more and more Americans kick liquor. We also know that half the fun of having a drink was the saloon experience itself. If there’s a way to combine that without falling off the wagon, well, we’re all for it.

How ’bout you? Have you tried Non-Alcoholic Beer? Are you planning on it? Would you like to? Or are you still with the alcoholic variety? It’s okay. You’re entitled to be where you are. You’re also entitled to change where you are whenever you so desire. If you so desire to switch it up right about now, then please give us a ring. We’d be delighted to sort you out. In fact, we’d be honored. Really.