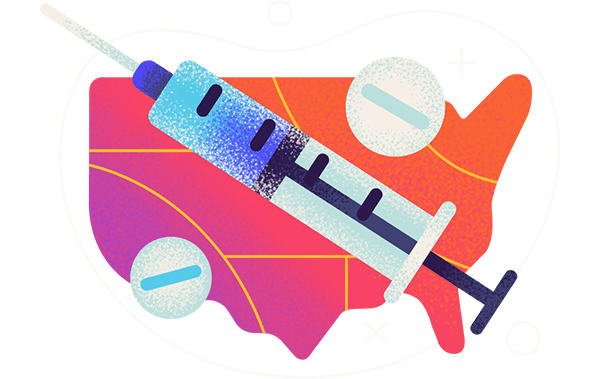 Let’s end SAMHSA’s National Prevention Week by taking a look at state-by-state drug use rates as delivered by the good folks at WalletHub. Yep, once again, the credit monitoring service has put together one comprehensive look at a very important topic. And once again, we’re as driven to see how our state stacks up against the others as we are by how the country stacks up as a whole. Since this concerns drug use in America, well, you can bet there are some serious issues with both.

Actually, Florida didn’t fare as badly as we expected. Though frankly we take the state’s overall numbers with some skepticism. Oh, it has nothing to do with WalletHub’s methodology. We’ve always found that to be quite sound. But Florida has had a succession of administrations that have kept public health information from becoming, well, public. And while much of that info has concerned COVID, we can’t be sure it doesn’t also include substance abuse. After all, what better way to make a state look attractive than by downplaying its drug rates?

To be fair though, DeSantis did just recently sign a bill that would allow those recovering from substance abuse disorders to play a role in treatment programs. We mean the law covering peer specialists, which was put into play by State Senator Darryl Rouson, a St. Petersburg Democrat who’s been sober for twenty years. Florida Politics’ Christine Jordan Sexton says the new bill will allow specialists to request an exemption if a disqualifying offense arises in their background screening. Considering checkered pasts are how most peer specialists got their bona fides to begin with, this will permit them to work where they’re most needed. It also represents the kind of common sense necessary if we’re ever to get a jump on substance abuse.

State-by-State Drug Use Rates: A Snapshot

A quick snapshot of WalletHub’s findings has some startling reveals, including which state is reportedly using the most drugs per capita. That would be Vermont, which has the highest number of both teen and adult drug users. Oregon didn’t do much better (respectively #3 and #2), but the rest of the top 5 was spread evenly among eight separate states. Could Vermont and Oregon rank highest because of low population counts? Hard to say. What isn’t hard to say is that both states had a whole lot of residents using drugs last month.

They apparently weren’t using opioids though. Not most heavily anyway. That distinction went to Alabama, which now has the highest number of opioid prescriptions per capita. In fact, the South still seems to have opioids on lock, with Arkansas, Tennessee, Louisiana and Kentucky rounding out WalletHub’s Top 5. Haven’t they learned anything over the past decade?

As for handcuffs and drugs, well, South Dakota and Wyoming either have cleaned their streets of drug dealers or they’re still trying to arrest their way out of the substance abuse crisis, for those states ranked a respective #1 and #2 for per capita drug arrests. Tennessee, North Dakota and Louisiana follow them on that particular Top 5, so it’s a bit difficult to really say what’s what. Does a lower population or a higher urban density mean more dealers are being locked up? Or are all five states still waging the same old War on Drugs?

Speaking of which, WalletHub Managing Editor John S Kiernan, who put together this insightful study, cited Nixon’s ill-conceived War on Drugs in his intro. In fact, the skilled surveyman said the War’s failings were one of the reasons he thought it prudent this study shows where “drug abuse is most pronounced and which areas are most at risk.”

Drug abuse has a long and storied history in the United States, writes Kiernan, and we’ve been “at war” with it since 1971. Yet despite the country’s best efforts to fight it, the problem is getting worse, and is exacerbated by the COVID-19 pandemic. There were over 100,000 drug overdose deaths in the 12-month period ending in April 2021, up 28.5% from the previous year. It’s crucial for the government to address this issue and prevent it from getting any worse.

Since Healing Properties is based in Florida, we’re especially interested in how Florida fared in the state-by-state drug use round-up. After all, the “study compares the 50 states and the District in terms of 21 key metrics, ranging from arrest and overdose rates to opioid prescriptions and employee drug testing laws.” And that’s a whole lotta pertinent data.

As always, WalletHub reached out and asked a few good experts for their opinions before unleashing the latest study. And among the various pertinent issues they addressed was what to do if one has a friend or a family member abusing drugs. It’s a common question. Even more so these days. It’s also all important. Because one wrong reaction risks losing a loved one forever.

University of Pennsylvania School of Nursing’s Shoshana V. Aronowitz believes it’s important a person helps according to “what their loved one wants.” If “finding evidence-based, quality treatment or harm reduction services” is on a loved one’s wish list, then by all means, help secure those services. But Penn’s Assistant Professor recommends avoiding coercion at all costs. “Coercive approaches are rarely effective,” says Aronowitz, “and there is no good evidence to support bombarding folks with confrontational ‘interventions'” either. The same applies to “trying to shame someone out of using.” Aronowitz also suggests the friends and family members would do well to consider their own well-being. And there is good evidence to show that Al-Anon and the like helps everyone involved.

University of Cincy Pharmacist and Professor Dan Arendt also advises empathy, as well as education. He advocates incremental approaches toward treatment too, as well as on-hand harm reduction. Arendt sees nothing wrong with carrying naloxone or fentanyl test strips, especially if that means keeping someone from dying. He also thinks educating oneself about harm reduction and evidence-based treatment will help you help your loved one when the time comes. Mostly though, Arendt believes it’s “important to show your support rather than cut them off for the sake of tough love.” After all, how else will you be there for them when that all-important time does eventually come?

Healing Properties applauds WalletHub and Managing Editor John S Kiernan for once again putting together the kind of insightful and incisive study that sheds real light on a subject. Yes, state-by-state drug use is rising. And yes, we wish that it wasn’t. But being armed with the facts at least puts us in the fight. And no matter how much we may be against waging war, this is indeed a fight.

We’d also like to thank Penn’s Shoshana V. Aronowitz and the University of Cincinnati’s Dan Arendt for chiming in with their own invaluable insight. We hope we didn’t paraphrase them too erroneously, but in the interest of brevity we had no choice. Besides, between students and patients, we’ve got a feeling their invaluable input is already getting directly where it needs to get every day of every week. Their respective universities and hospitals are lucky to have them.

We’d also like to salute Florida State Senator Darryl Rouson. It’s one thing to get sober and stay sober for two solid decades. It’s quite another to rise to State Senator along the way. That the good lawmaker continues to advocate for those in recovery only makes his story that much more remarkable. It also further deepens our already profound respect. Thank you, Good Sir!

And Thank You, whoever you are, for reading this report. We only do this to help spread the word about sobriety. If you’re reading this, well, then the sober word has reached you. And we couldn’t be more grateful.

Actually, we could. Be more grateful, that is. If it turned out that you had an issue and then sought help. That would really thrill us. It doesn’t matter who you call, just so long as you call someone. Because it’s the getting help part that’s most important. If however you need some help getting help, well, then by all means please give us a ring. We’ll get you sorted, wherever you are and whatever you need. Yes, even if that means elsewhere. Like we said, it’s really all about getting help.