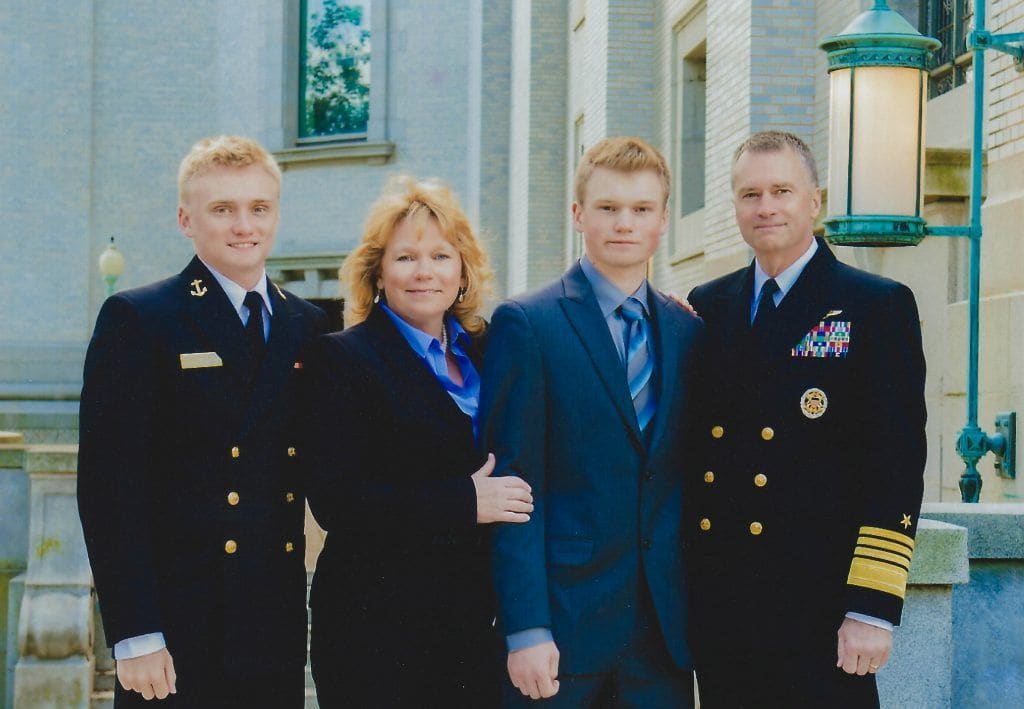 One son was an addict. The other is fighting to eliminate the stigma of addiction. Both are offspring of the second highest ranking military officer in America. His name is Admiral James A. Winnefeld Jr. He’s the former Vice Chairman of the Joint Chiefs of Staff. His sons’ names are Jonathan and James.

“Five moves in six years strengthened [an] already robust relationship,” writes James in USA Today. “[And] as our father rose to be the second-highest ranking military officer in the nation, we formed a strong mutual understanding of high morals and values.”

What James didn’t know though was that Jonathan was suffering from “crippling anxiety and depression.” He actually had been his whole life. But the mental health issues had been mitigated by the brothers’ “tight relationship.” Then James went off to college and little brother lost his rock.

Jonathan “began to look toward other means to deal with his anxiety,” writes James. “He started first with alcohol, then marijuana and, finally, stronger drugs.”

Jonathan sought help. And found it. But when James visited his little brother in rehab those “morals and values” made a serious claim for the high ground. It wasn’t pretty.

“To me, being a drug addict was the result of a fundamental moral failing,” writes James. “And the purpose of rehab was to fix this moral failing. Indeed, I was ashamed [of my brother].”

James was also angry at Jonathan “for breaking our moral code and betraying our family’s trust.”

James’ sentiments echo those of many if not most people, whether or not they’re related to an addict. It’s the stigma of addiction. And it keeps countless addicts from seeking treatment.

That stigma didn’t stop Jonathan though. Not then anyway. “Over the course of 15 months, he got a job, became a nationally qualified emergency medical technician, and made plans to attend college. He’d even helped save the life of a man who overdosed on a McDonald’s bathroom floor.”

It was, writes James, “an astounding turnaround.”

Unfortunately, it wouldn’t last. Because “just when everything seemed to be going his way, Jonathan relapsed.” And one week after he started college, he died from an accidental heroin overdose in his dorm room. Jonathan was just 19 years old.

The Stigma of Addiction

“I shouldn’t have been ashamed of my brother,” writes James. “I put the blame for my brother’s addiction squarely on his shoulders. But I’ve [since] learned that stigma of addiction is a burden too heavy to carry.”

James also “came to learn that [addiction is] perhaps the most stigmatized disease in our nation’s history.”

“Traditionally, we think of a disease as something that is either communicated to the body via infection or that grows inside the body as a cancer,” he writes. “Addiction, on the other hand, is something that changes the brain.”

It isn’t however something that should shame anyone — either addict or loved one. It should though be treated — compassionately and diligently.

“A substance-dependent person should be viewed as someone who has a treatable but chronic disease, much like a cancer or diabetes patient,” writes James, “rather than a weak-willed individual with a moral failing.” Eliminating the stigma of addiction will help do just that. It will also “lead to more public support for — and thus more pressure on the political class to provide — the vast resources, effort and policies required to defeat this epidemic.”

“Nobody grows up wanting to become an addict,” writes James, “including my brother.”

James “LJ” Winnefeld III is now a second lieutenant with the Marine Corps in Fort Sill, Oklahoma. Like his father before him, James is fighting for our country. James is also fighting for those who can’t fight for themselves. So is the entire Winnefeld family, who created SAFE Project to fight addiction fatalities in the wake of son Jonathan’s death. SAFE carries on the fight Jonathan began before he lost the fight for his life.

“I now live my life with a newfound purpose,” ran the last sentence of Jonathan’s freshman essay, “wanting to help those who cannot help themselves.”

Healing Properties would like to extend our deepest condolences to the Winnefeld family. We’d also like to thank them for their service, as well as to applaud their courage. SAFE Project is a remarkable way to honor Jonathan Winnefeld. And we’ll continue to do everything we can to help the Winnefelds accomplish their mission to end the stigma of addiction and Stop the Addiction Fatality Epidemic once and for all.