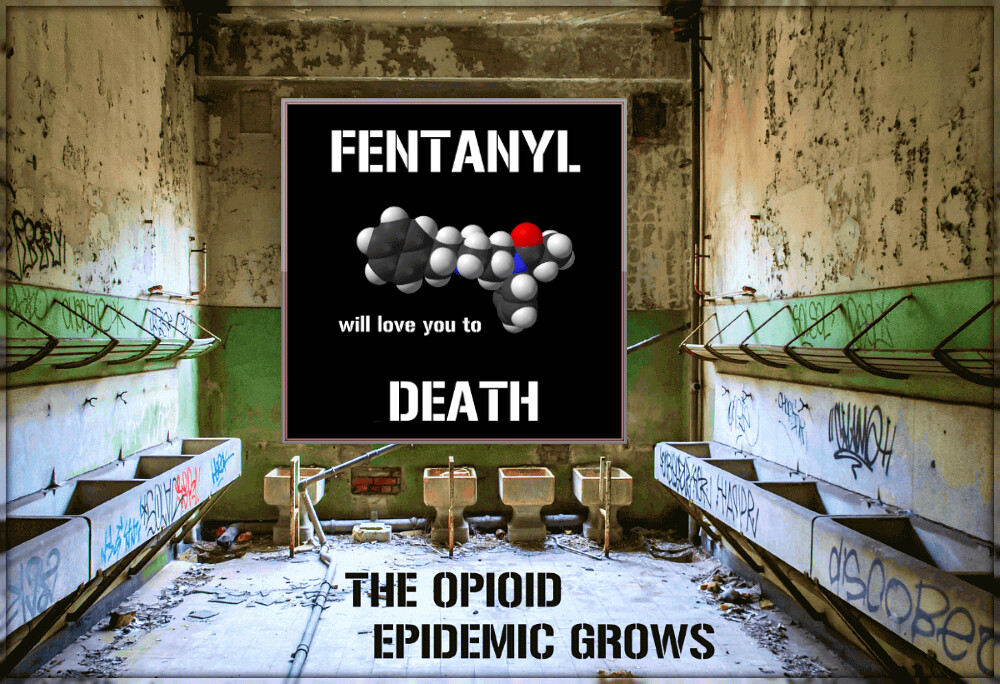 It was bound to happen. The business of fentanyl wouldn’t permit otherwise. Profit margins are just too high. Besides production is so cheap, distribution’s even cheaper, and the market was already there, readymade and clamoring. Give the people the drug that they want. That’s what the dealers say. Okay, so maybe the drug does kill customers dead. It doesn’t kill all customers though. Just enough to count.

Hard to tell who’ll have the higher number in the end.

The Business of Fentanyl: Bodies vs Profits

Hell, it’s hard to tell who has the higher number now. Luke Barr of ABC News says “Customs and Border Protection has so far seized more fentanyl in 2021 than all of 2020.” How much more? Well, as of April, border authorities had already seized 6,494 pounds of fentanyl, compared to 4,776 pounds in all of 2020. If that accounts for even 10% of drugs crossing the border (a very generous number), there’d still be nearly 60,000 pounds hitting the market. 60,000 pounds is just over 27,000 kilos. A kilo of fentanyl currently wholesales for around $80k. So that leaves $2.1 billion in gross wholesale revenue. Since drug trafficking organizations (DTOs) reportedly spend around $5000 to bring each kilo to market ($135 million), they’ll end up netting nearly $2 billion.

Remember, those figures just represent monies made from fentanyl. They don’t take into account profits from cocaine, meth and regular old heroin.

Oddly enough, fentanyl is also making it possible to increase profits on the old standby drugs. Because the drug is so potent, dealers are mixing it into coke, meth and powder heroin, and thereby providing even more of a kick. Unfortunately, the buyer doesn’t know whether or not their purchase contains fentanyl, let alone how much, which exponentially raises the risk of every single use. These days even that “harmless bump when drunk” can actually kill you.

That brings us to the bodies. The Centers for Disease Control and Prevention says “more than 36,000 people died from overdoses involving synthetic opioids in 2019.” If each of those people spent an average of $50 a day supporting their habit (a very modest number), that would mean an annual revenue loss of $64.8 million. Few companies could withstand losing that kind of revenue; then again, few companies generate enough revenue where such a loss can even be considered. To those that do (say, the $2 billion per annum types), losing 3% probably doesn’t seem like such a big deal. Especially if you consider that each of those 36,000 deaths also served as unimpeachable testimony to the potency of their product.

That’s roughly where the DTOs stand. Apparently unphased at sacrificing tens of thousands of customers for the cause.

The Business of Fentanyl: Who Else Pays?

So now we roughly know how much drug overdoses cost the DTOs; who else ends up paying for the opioid epidemic? Well, the CDC “estimates that the total “economic burden” of prescription opioid misuse alone in the United States is $78.5 billion a year.” That includes “the costs of healthcare, lost productivity, addiction treatment, and criminal justice involvement.”

If that’s how much the licit drug dealers burden America’s economy, imagine how much the illicit drug dealers contribute to the figure. Actually, the California Opioid Overdose Surveillance Dashboard claims the state filled 17,576,679 prescriptions for opioids in 2019. And that’s supposed to be after we put some kind of a lid on the problem. In fact, National Institute on Drug Abuse (NIDA) says the year before California providers wrote 35.1 opioid prescriptions for every 100 persons, among the lowest prescribing rates in the country (which averages 51.4 prescriptions per).

Surely the number of illicit opioid users can’t be much higher than that. Say it isn’t. Then say that illicit drug users are most likely a larger economic burden than their licit counterparts (though of course there’s bound to be some bleed over). But even if those addicts cost the country $100 billion a year, that’s a significant dent.

The worst thing though is the real costs can’t be calibrated. Not even close. How many small businesses failed because their partner or point person crashed and burned from drugs? Hell, how many families fell apart because Mom or Dad or Sis or Bro did likewise? How many people were terrorized by a raging addict? How many first responders were traumatized by a fatal overdose? What about the families of all those folks?

No, addiction costs this country in ways and means that can’t be calibrated in mere dollars and cents. Unfortunately until we successfully interrupt the business of fentanyl, it’s going to keep costing us.

That was the lede paragraph in Erin McCormick‘s recent Guardian expose about fentanyl’s taking over the West. She didn’t stop there either. How could she? That opening ‘graph alone unleashed sheer terror. For though the bust represented enough fentanyl to repeatedly wipe out the City by the Bay, it also made clear that fentanyl’s deadliness is here to stay for awhile.

“The number of deaths from fentanyl overdoses jumped by more than 2100% in California in five years,” writes McCormick, citing the above-named Dashboard. And last year those overdoses accounted for nearly 4,000 deaths. She cites San Francisco (average two deaths a day), San Diego (wiping out the homeless population) and Santa Clara County (where overdoses are double and skewing younger). And she makes great good use of Dr Daniel Ciccarone, a professor specializing in addiction medicine at the University of California, San Francisco School of Medicine. Ciccarone has thoroughly studied the matter; in fact, he’s even just dropped an incredibly edifying paper on the subject’s new wrath. That makes him perfectly suited to sound the alarm.

“We simply have not gotten to a proportional response to what amounts to an uncontrolled crisis,” he told McCormick. Deaths are still rising, due largely to the surge in West Coast overdoses. Yet “there still aren’t enough drug treatment slots in America.”

McCormick then grabbed Dr Aimee Moulin, a professor of emergency medicine at the UC Davis Medical Center in Sacramento. Doc Moulin is spearheading a program to make it possible for drug users to easily get treatment at any and every California hospital, and, as you likely suspect, she wholeheartedly agreed with Ciccarone’s assessment.

“Opioid use disorder is highly treatable and we have highly effective medications,” she said. “We just need to have an all-hands-on-deck approach.”

If you or someone you love is suffering from addiction, please reach out for help. NIDA and SAMHSA both have hotlines. We can help you here at Healing Properties too. No matter where you’re located. Just please make the call.