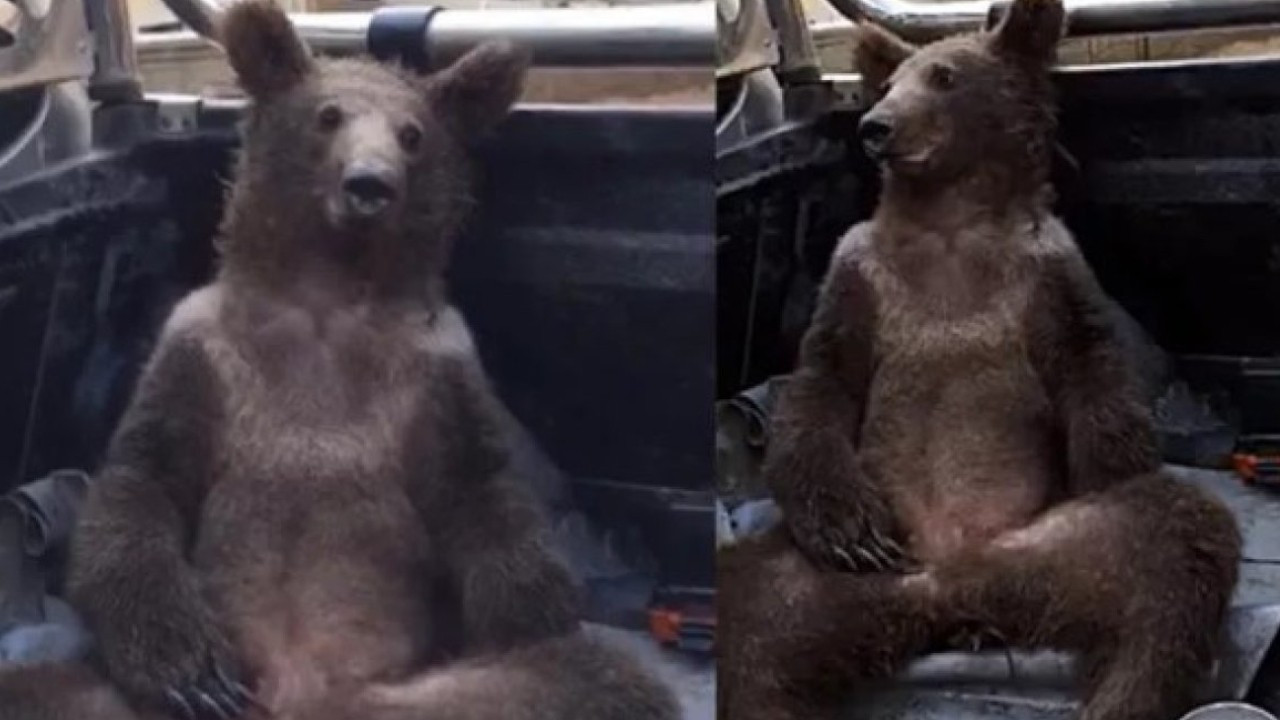 This Bear is Tripping!

Poor little Balkiz. The brown bear cub surely didn’t know the honey she’d stumbled across was a hallucinogen; she only knew it tasted great. So she ate. And she ate. Then she ate some more. And the poor little cub didn’t stop eating until she was tripping – literally.

Balkiz got so high officials from Turkey’s Ministry of Agriculture and Forestry had to come help bring her down.

In fact, that’s how our little brown bear cub got her name. Balkiz, which is Turkish for “honey girl” or “honey daughter.” It also alludes nicely to the Balkan Mountain region where that particular brand of honey is found. (The Balkans actually translates as “the land of honey and blood”.) Her rescuers apparently didn’t ask Balkiz whether or not she regretted finding it.

Perhaps they didn’t have to ask. They most certainly don’t have to ask whether or not she’ll be going back for more. Because one look at that strange trip of a clip clearly shows Balkiz wasn’t built for tripping.

Don’t blame Balkiz though. History shows that neither man nor beast was built for that hallucinogenic honey’s debilitating tripping.

The Turkish term for it is deli bal. That is, mad honey. It’s “been cultivated by beekeepers in the Black Sea region and the Himalayas for centuries,” writes Washington Post Morning Mix reporter María Luisa Paúl. And it springs from bees feeding on the pollen of rhododendron flowers, which carry a natural neurotoxin called grayanotoxin. Like most toxins, this doesn’t taste very good (that’s why it’s also known as bitter honey). It can also bend the brain, causing euphoria, hallucination and intoxication.

Mad honey is not that easy to get though. Luisa Paul – sourcing both Guardian correspondent Bethan McKernan and the late Texas A&M anthropology professor Vaughn Bryant – found that harvesters are forced to climb tall trees and great cliffs in order to acquire “the red-tinted goop.” They’re also forced to fend off one of the world’s largest species of honeybees. The returns on those risks are big, though. A pound of potent, high-quality deli bal can sell for up to 2,000 Turkish lira. That’s about $111 per, which makes it a very pricey honey.

The High Cost of Tripping

Mad honey can cost people (or bears) much more than money too. Xenophon of Athens, one of Socrates’ students, wrote about a Greek army stumbling upon a batch of mad honey after a victory over the Persians. Feeling invincible, the troops ingested all they could lay their hands on. Within hours they “began vomiting, had diarrhea, became disoriented and could no longer stand.”

Those Greeks recovered the next day and were subsequently able to make their way home. Some 334 years later, a troop of Pompey the Great’s soldiers fell on a honeytrap planted by the Persian army and weren’t so lucky. Professor Bryant said the Roman troops “ate the honey, became disoriented and couldn’t fight. The Persian army [then] returned and killed [them all].”

In addition to some very colorful mad honey history, McKernan’s most excellent 2020 Guardian piece dives into some very salient facts. We learn, for instance, that “a small spoonful on its own or with hot water or boiled milk is enough to induce a mildly hallucinogenic or euphoric state.” We also learn that most folks take it “before breakfast as a traditional treatment for hypertension, impotence and a number of other conditions.”

“Eighteenth-century Europeans called it miel fou,” and used it to spice up their ale. Twenty-first century creatives used it to pepper series such as Futurama and Sherlock Holmes.

Too much mad honey can induce more than mere tripping. In fact, notes McKernan, it can “reduce blood pressure to potentially dangerous levels and induce nausea, fainting, seizures, arrhythmia and in rare cases, death.”

Perhaps most dangerous however are the mad honey harvesters, whose lives end up at risk even without ingesting any of the crazy stuff.

Take Hasan Kutluata, whose father taught him how to make traditional lindenwood beehives and secure them on the branches of trees that dart the damp mountainous slopes around the Black Sea. Kutluata told McKernan he couldn’t possibly count the number of trees he’s shimmied up and down over his 30 years of mad honey harvesting. But trees aren’t a problem (he’s not fallen once); bears are. Especially when they attack.

“I survived [the bear attack] by shoving my arm down its throat and cutting off its oxygen, while shouting for help,” he said, showing the red scars that still mark his hands and left leg.

Kutluata has since erected a draw bridge between the bears and the trees.

Balkiz apparently found a mad honey farm without such a draw bridge, because by the time local farmers found the little brown bear cub she’d eaten enough to knock herself out. Subsequent video footage shows her walking warily and unsteady, with an unfocused and confused look and a very un-bear-like gait. In fact, Balkiz appeared to be, well, tripping.

Fortunately many people swooped in to help the little gal, including officials from Turkey’s Nature Conservation and National Parks department and the aforementioned Ministry of Agriculture and Forestry. In fact, it was the Minister Vahit Kirişci who oversaw Balkiz care, as well as her release back into the wild.

“Godspeed to the beautiful girl who has won the hearts of us all,” wrote Minister Kirisci. “May she eat everything in moderation, even honey.”
.

Healing Properties salutes Balkiz for her natural inquisitiveness, as well as her capacity to survive. We hope she didn’t have too unpleasant of a trip. We also salute everyone who helped Balkiz make it through the night and get back to her mom. The young cub surely must’ve been beyond frightened. That these good people could provide care enough to surpass the fear shows tremendous empathy.

Above all we’d like to salute the world for once again proving it’s not all doom and gloom. That most people do have a heart and, given the chance, they’ll freely and readily open it up. Today’s post might only peripherally be about substances, but it’s 100% about living your best life. A life that can only come when living harmoniously with the rest of the world.

If you’re seeking some help – or if you simply want to talk – please feel free to give us a ring.