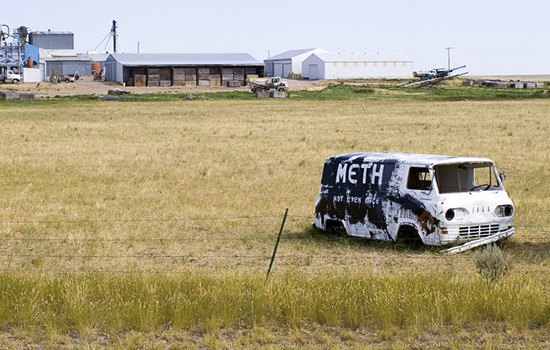 This is NOT Your Grandpa’s Methamphetamine!

As if fentanyl-laced meth — and the subsequent rash of overdose deaths — wasn’t enough of a issue, now we’ve got an even worse speed problem to handle. Yep, you read correctly: speed is even worse for people than speed freaks even knew. Why? Because there’s a new strain of methamphetamine making its way among users. It’s cheaper, stronger and maybe even deadlier. It’s also causing a whole new kind of extreme psychosis.

It’s called P2P Meth. And it will put you in the psych ward. Or worse. Much worse. Much, much worse.

Like with much insight into American narcotics abuse, we turned to investigative powerhouse Sam Quinones. Quinones’ latest book, Dreamland: The True Tale of America’s Opiate Epidemic (Bloomsbury) won more awards than we’ve time or space to cite (including the coveted National Book Critics Circle Award). The former L.A. Times ace also currently writes for a number of America’s most respected outlets, including The Atlantic. In fact, it is from The Atlantic that we cribbed the following insight and info.

According to Quinones, the P2P Meth scourge came about after the Fed’s crackdown on ephedrine caused drug-suppliers to find another way to make their speed. That other way happened to be with a clear liquid called phenyl-2-propanone, aka P2P. The thing is, “many combinations of chemicals could be used to make P2P and most of them were legal, cheap, and toxic.” We’re talkin’ nice, friendly stuff like cyanide, lye, mercury, sulfuric acid, hydrochloric acid and nitrostyrene. Furthermore, “the P2P meth-making process was [both] complicated and volatile.” Something the Hell’s Angels had discovered back in the early ’80s. Frankly, “the bikers’ cooking method gave off a smell so rank that it could only be done in rural or desert outposts.” Back then “the market for their product was limited” too.

The P2P method offered traffickers another huge advantage as well — the variety of chemicals used to make it were also used for racing fuel, tanning solutions, gold mining, perfumes, and photography processes. Feds “couldn’t restrict all these chemicals the way it had with ephedrine without damaging legitimate sectors of the economy.”

Worst of all, though ephedrine meth tended to damage people gradually, over many years, P2P meth, in contrast, seem to wreck users within days, if not hours. Why? Because P2P meth managed to cause especially egregious damage to the brain.

Then there’s the fact that P2P meth is pretty much everywhere.

“Meth reminds me of what alcoholics go through,” Matt Scharf told Quinones. “Meth is now so readily available. There’s an availability to it that is not the case with heroin or crack. It’s everywhere.”

Since Scharf is the director of recovery programs at a Los Angeles treatment center called Midnight Mission, he undoubtedly knows what he’s talking about. Since he’s a caring and compassionate person, he undoubtedly rather not know it to be true though.

Just as no one in their right mind wants to know that opioid addicts seem now to be shifting, en masse, to methamphetamine. Nevertheless, it is true. It’s also unprecedented. But as Quinones points out, “you don’t typically overdose and die on meth; you decay.”

By 2019, in the course of my reporting, I was routinely coming into contact with people in Kentucky, Ohio, Indiana, Tennessee, and West Virginia who were using Suboxone to control their opiate cravings from long-standing addiction to pain pills and heroin, while using methamphetamine to get high. Massive supplies of cheap P2P meth had created demand for a stimulant out of a market for a depressant. In the process, traffickers forged a new population of mentally ill Americans.

Put that into your glass pipe and smoke it.

Violent paranoia, hallucinations, conspiracy theories, isolation, massive memory loss, jumbled speech. Methamphetamine is a neurotoxin — it damages the brain no matter how it is derived, writes Quinones. However, P2P meth seems to create a higher order of cerebral catastrophe.

Schizophrenia and bipolar disorder are afflictions that begin in the young. Now people in their 30s and 40s with no prior history of mental illness seemed to be going mad.

So mad that Portland, Oregon had to close its downtown sobering station. The station had opened in 1985 as a place for alcoholics to sober up for six to eight hours, writes Quinones. “But it was unequipped to handle people addicted to P2P meth.”

“The degree of mental-health disturbance; the wave of psychosis; the profound, profound disorganization [is something] I’ve never seen before,” said Central City Concern CEO Rachel Solotaroff. The social-service nonprofit used to run the station, which seemed to be a welcome respite for alcoholics. P2P meth users are decidedly not the same as alcoholics.

“”If they’re not raging and agitated, they can be completely non-communicative,” Solotaroff continued. “Treating addiction [relies] on your ability to have a connection with someone. But I’ve never experienced something like this — where there’s no way in to that person.”

“They’d be okay when they were just using crack,” said Joseph, who worked Skid Row for 22 years. “Then in 2014, with meth, all of a sudden they became mentally ill. They deteriorated into mental illness faster than I ever saw with crack cocaine.”

Dr. Susan Partovi, whose H.E.A.L. heavily helps the under-helped on the streets of Los Angeles, told Quinones “meth may now be causing long-term psychosis, similar to schizophrenia, that lasts even after they’re not using anymore.”

That’s not only not good, it’s beyond bad.

Cure? There’s Not Even Treatment

And don’t think for a minute that there’s any way around it other than complete abstinence. And even then the road’s going to be long and rough.

Despite years of research, writes Quinones, science has found no equivalent of methadone or Suboxone to help subdue methamphetamine cravings and allow addicts a chance to begin repairing their life. There’s also nothing that can help kickstart a recovering addict’s essential human connection.

Jennie Jobe, the Director of Morgan County Residential Recovery Court in rural Eastern Tennessee, believes human connection is crucial to an addict’s recovery. Unfortunately she also sees how hard it is for P2P Meth users to re-establish that connection.

“It takes longer for them to actually be here mentally,” Jobe told Quinones. “Before, we didn’t keep anybody more than nine months. Now we’re running up to 14 months, because it’s not until six or nine months that we finally find out who we got.”

Believe it or not, some can’t even remember their life before jail.

“It’s not unusual for them to ask what they were found guilty of and sentenced to,” she added.

Healing Properties doesn’t mean to scare people. Actually, we kinda do. Mean to scare people that is. See this P2P Meth business is scary. Frightfully scary. So if it takes a Fright Night to keep someone from giving up the ghost, well, hooray! Because from what we see, this brand of methamphetamine doesn’t take prisoners, it executes them. And resurrection is a helluva followup to have to count on.

So, yeah. Be afraid. Be very afraid. Please. This P2P Meth mentally cripples people, often within hours. Worse, it doesn’t even offer an enjoyable high. Sure, it might take you out of your head. But at what price? Never getting back in again? Isn’t that a bit much to pay for a half-ass escape? Of course it is. Way too much.

How ’bout it? You good? Have you already fallen? If so, then give us a ring. Please. And let’s get you working on that resurrection. No, it won’t be easy. But it can be accomplished. First, though, you’ve gotta step up, make the decision, and start rising. You ready?