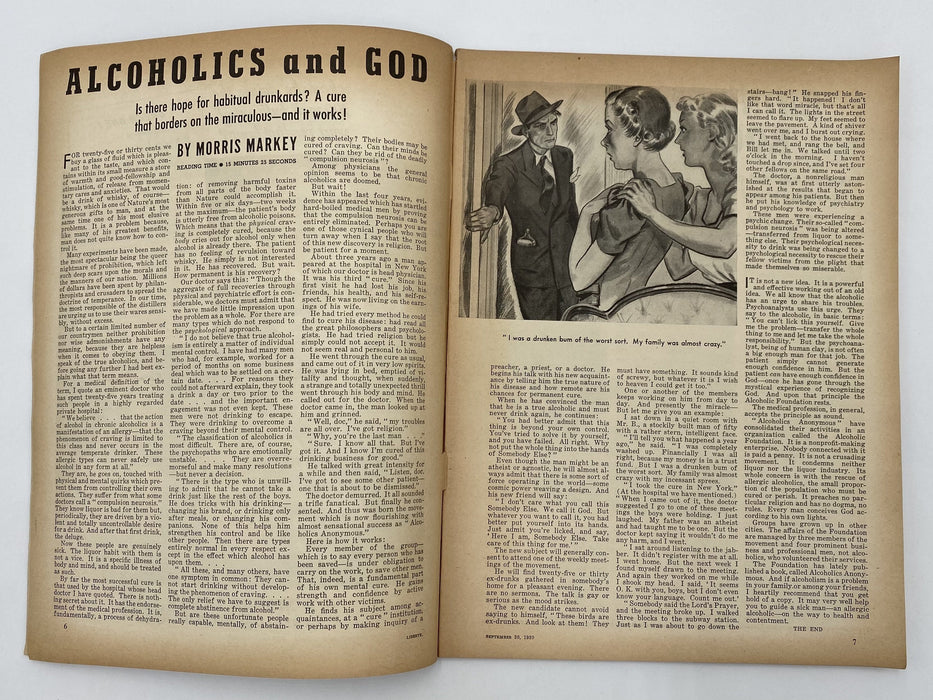 Alcoholics and God: The Birth of AA

Back in 1939, long before the whole wide world knew about Alcoholics Anonymous, hospital owner Charles Towns approached feature writer Morris Markey and told him the tale of addict and alcoholic Bill W. It was an inspiring story, packed with hope and redemption, and Towns believed it would help if more addicted folks got to hear it. Markey agreed, so he brought the idea to his editor, Fulton Oursler, at Liberty Magazine. Oursler also saw promise in the story and told Markey to go ahead and write it up. The resulting essay, Alcoholics and God, would prove to be the spark that helped ignite AA.

Alcoholics and God immediately received no less than “800 urgent pleas for help,” says the Silkworth.net site report. Those pleas were promptly turned over to AA Jane-of-All-Trades Ruth Hock for a response.

“Ruth wrote fine personal letters to every one of those people,” Bill W. remembered later, “enclosing a leaflet which described the AA book.”

Bill is of course referring to The Big Book, which at the time was brand new and unknown outside of Towns Hospital. In fact, Towns had bankrolled Bill so he could write the book. Now that The Big Book was finished, they needed to get it into peoples’ hands.

Ruth’s letters did the trick. Several hundred books sold at once, bringing in much needed revenue to the organization. “More importantly,” wrote Bill, “we struck up a correspondence with alcoholics, their friends and their families, all over the country.

One of the most impressive results occurred in Philadelphia, where a certain “loner” named George S immediately sobered up after reading Markey’s Liberty piece.

“George was in bed drinking whisky for his depression and taking laudanum for his colitis,” goes the report. “The Markey piece hit him so hard that he went ex-grog and ex-laudanum instantly.”

George then wrote to AA headquarters in New York. HQ put him in touch with a traveling salesman named Jim Burwell (see “The Vicious Cycle” in The Big Book). The two later invited a group of men to George’s home for a meeting – Philly’s first. “And that’s how AA started in the City of Brotherly Love,” wrote Bill.

There was more of course. Much more. Including a series of stories written by Elrick B. Davis for the Cleveland Plain Dealer. Like Markey’s articles, those pieces sang the praises of AA. They also inspired others to set up their own AA meetings. By year’s end, there were AA chapters in numerous cities, including Cleveland, Akron and Chicago, as well as Philadelphia and New York.

Before Alcoholics and God

Whether Charles B. Towns was a genius or a charlatan really depended upon who you asked. Most likely he was a good bit of both. Sure Towns owned a hospital, but he didn’t have a medical license. And the “hospital” as he called it was really more of an addiction treatment center. In fact, addicts and alcoholics were the only kind of patients accepted at Towns Hospital, and if they weren’t well-heeled, they didn’t get treatment.

Of course even desperate men need some kind of reassurance, no matter how much money they have, and for that Towns turned to Dr. Alexander Lambert, President Theodore Roosevelt’s personal physician. Lambert had worked with addicts and alcoholics at New York’s Bellevue Hospital, often using Towns’ own treatment regimen. It was that regimen however that brought about some serious notoriety.

The “cure” was called “Belladonna” and it consisted of a mixture of different homeopathic hallucinogens. The main ingredient was Belladonna itself, aka deadly nightshade. It also included henbane, as well as dried prickly ash berries. “The mixture was given every hour all day for about fifty hours,” writes e.tahiraj, “until the patient’s face became flushed, eyes dilated and throat dry.”

Towns claimed to have cured thousands with this rather unorthodox remedy, and boasted of a 90% success rate.

This info comes from an impressively researched piece on the Baruch University blog entitled Charles B. Towns Hospital. The piece is part of the site’s A History of Health in New York and it is as enlightening as it is enjoyable. It’s especially so for those who adhere to AA’s practices and principals, even if it’s only to learn that the program didn’t arrive out of thin air.

It’s also useful to learn that Towns Hospital was among the most modern and up-to-date facilities of the time. It also boasted a four physician staff who were backed by a fleet of on-call nurses, as well as a roof that had been refitted as a sort of meditation garden. In other words, the facility truly did have all the trappings of today’s holistic healers.

Then again, when a facility has well-heeled patients footing the bill, it can do a lot of forward-looking experimentation. Eventually though a place is going to have to deliver on its promises, and after a few years folks began to learn that Towns seemed to sound off a lot more than his hospital deserved.

Then came Bill W. The AA founder went through Towns’ cure three times and each time he relapsed. After the third attempt however, he subsequently connected with the Oxford Group and experienced that essential spiritual awakening. The rest is AA history.

AA’s practices and principles also happen to open up the addict and alcoholic to the truly transformative. As Towns found out, there is no cure without getting the spirit in on things. And it’s that spiritual transformation which separates the sober from the relapse. Untold thousands of addicts and alcoholics will readily concur.

Make that untold millions. There’s no telling exactly how many folks have gotten sober through AA, but we can tell you it’s worked for almost every single HP alumni. Care to try for yourself? Then please give us ring. In the meantime, take a trip back to 1939 and experience Alcoholics and God.

Very special thanks to the good folks at Silkworth.net for carrying on the glorious Tradition and for providing the spur for this piece. Thanks also to Recovery Collectibles for the smart and historical Liberty mag image that crowns the article.