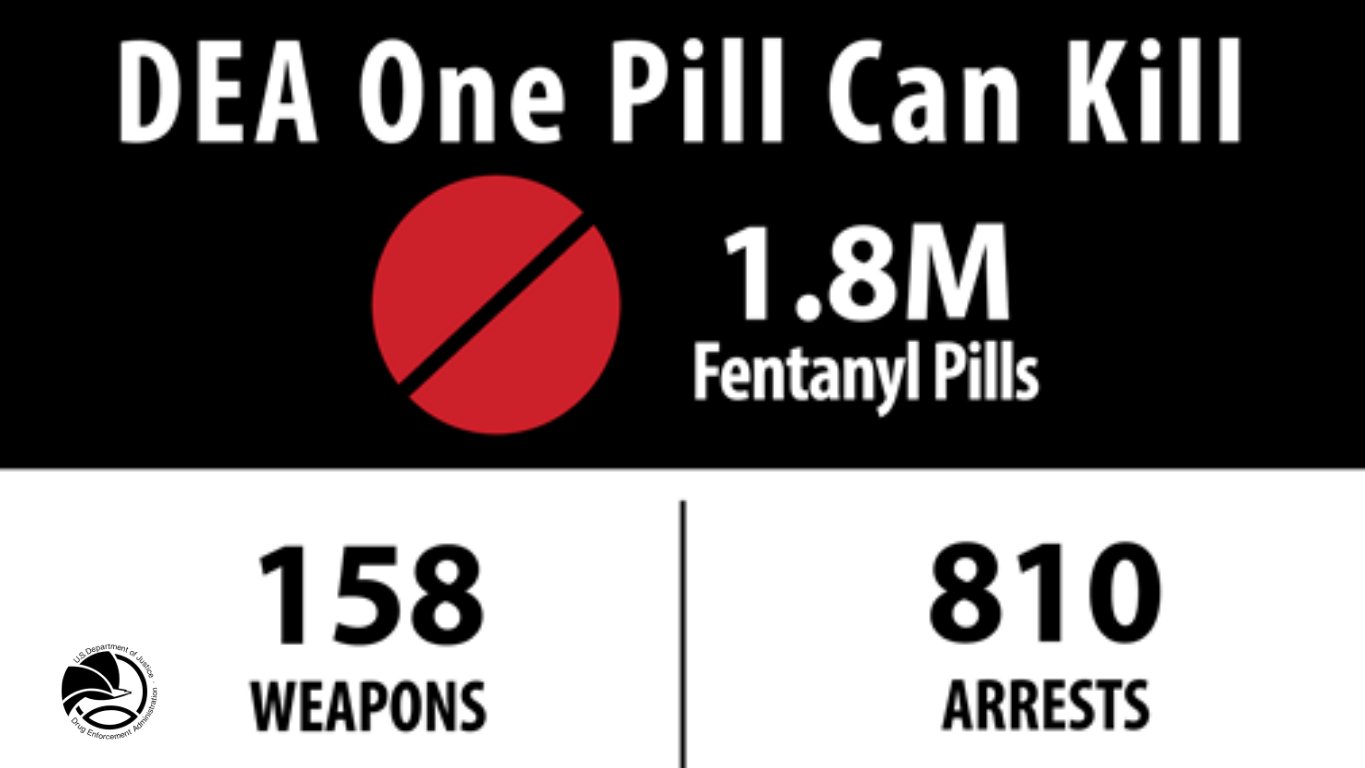 The DEA Cracks Down Hard on Illicit Fentanyl

Seems the DEA has amped-up their fight against illicit fentanyl. Then again, when a country gets saturated and its citizens start dying by the legion, an agency is bound to raise the volume. The DEA though cranked it to 11 and then started banging heads amid the cacophony.

The result? Historic numbers of deadly pills forever taken off our streets — and removed from the overdose pipeline.

Why? Because those counterfeit prescription meds are killing more and more American each and every day. And the DEA is out to change that narrative — for good.

“Illicit fentanyl was responsible for nearly three quarters of the more than 93,000 fatal drug overdoses in the United States in 2020,” said Deputy U.S. Attorney General Lisa O. Monaco in a statement. “The pervasiveness of these illicit drugs, and the fatal overdoses that too often result, is a problem that cuts across America, from small towns to big cities and everything in between.”

Of course, fake pills weren’t the only target of the federal purge. The law enforcers were also after the culprits who are selling these lethal knock-offs. And there too they scored. A whopping 810 arrests, from sea to shining sea.

And this is an incredibly vast network too. Comprised of Chinese chemical companies and Mexican cartels, and brought to peoples’ doorsteps via Instagram, Snapchat and TikTok, this illicit fentanyl pipeline is as widespread as it is elusive.

It’s also by far the most deadly drug threat this country has ever experienced.

One Pill Can Kill

We kind of suspected something might’ve been amiss when we went live about the DEA’s recent Public Safety Alert. As we said, the DEA doesn’t drop a Public Safety Alert without good reason. We figured 93,000 American overdose deaths though was the reason.

And it was. Mostly. Those American fatalities most definitely compelled the DEA to act. But so did the view from here now. If these arrest and seizure numbers are any kind of barometer, the DEA is finding illicit fentanyl everywhere it turns. And every turn seems to lead into another road going nowhere but to a deadly end.

And boy, are those paths getting crossed. Do the math: 810 arrests in roughly two months adds up to nearly 14 a day. That’s 14 bad actors who’ll no longer be subtracting Americans from the Census. Fourteen plug uglies who’ve lost their capacity to soil our streets, mar our communities, infect our children.

If the DEA nabbed that many bad actors in just two short months, wonder how many more they’ll bring down by continuing this full court press?

Opioid addicts aren’t the only people jeopardized by the flood of illicit fentanyl. Not even close. If anything, their high risk lifestyles makes them ever more wary and careful with the drugs they ingest. That’s not always the case, of course. But there is often some mitigation.

Not so for those who prefer cocaine or methamphetamine. Both daily abusers and weekend warriors are increasingly finding their drugs laced with illicit fentanyl. It’s generally something of a surprise too, considering fentanyl is an opioid. But the cartels apparently believe one oomph is as good as another, no matter who it kills.

The DEA crackdown isn’t designed for any of those folks though. Not really. Neither is the Public Service Alert. Sure the agency wants to save all American lives, but here they’re out to school those who are opting for counterfeit prescription pills. Not because they’re laced with illicit fentanyl, mind you, but because they’re mostly made with it.

Here’s how the DEA release spelled it out:

That’s right. These nefarious networks are mass-producing some of the most popular meds on the market. And they’re using illicit fentanyl to do it. The illegal drug-makers apparently aren’t afraid to be generous with their product either. In fact, “DEA laboratory testing reveals that four out of 10 fentanyl-laced fake pills contain a potentially lethal dose.”

Isn’t that nice of them?

That’s why the two-month cross-country crackdown. And that’s why the Public Safety Alert. That’s also why there’s an attendant public service campaign. It’s called One Pill Can Kill. And its message needs to be heard by everyone.

Healing Properties again thanks the DEA their exemplary efforts concerning illicit fentanyl. The Public Safety Alert and the Public Service Campaign was already a terrific one-two punch; adding the countrywide crackdown should be good for a three-strikes-and-they’re-out. Let’s hope so. The quicker we rid our communities of this deadly menace, the faster Americans can get back to doing the things they love most.