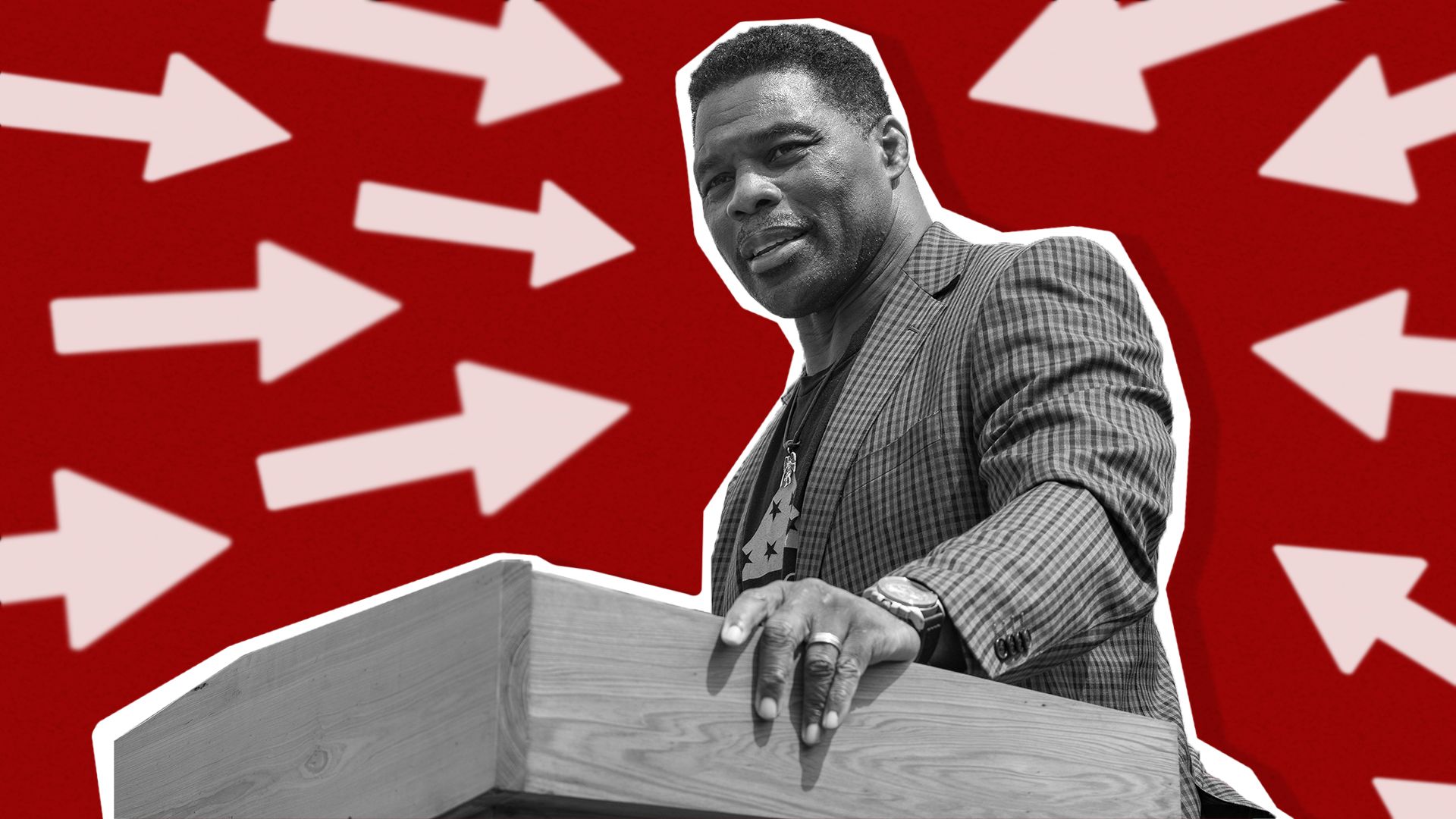 What if a judge offered you a choice between serving your sentence behind bars or in a work camp? You’d probably take the camp right? Of course you would. What if the work you performed at that camp was grueling and sometimes risky? Would that matter? How ‘bout if you weren’t getting paid for that work? Would you still choose that over jail? Herschel Walker and his pals are counting on you to say Yes, Yes & Yes! In fact, they’re counting on your Yesses driving them all the way to the bank!

From the looks of things, they’re backing a pretty sure thing. See, for the past decade or so, Walker’s Renaissance Man Food Services has contracted with Simmons Foods to provide poultry and other processed food products to a variety of mainstream American outlets. The thing is Simmons is staffed largely by an outfit called Christian Alcoholics & Addicts in Recovery Inc. (CAAIR), a faith-based rehab which doubles as an employment service. In fact, CAAIR specializes in providing convict workers to firms such as Simmons.

Not that there’s anything at all wrong with employing convict workers, mind you. Heck, it would be a blessing if even more companies were to do likewise. But like we said, these particular employees are unpaid. That’s right. The workers don’t get a red cent. Whatever money Simmons pays out goes right into CAAIR’s pockets – then it stays there.

CAAIR would argue that these workers receive room and board, as well as much-needed rehabilitation services. That if not for the opportunity to work they’d all be in jail. Furthermore, the firm insists that the experience provided by such work is invaluable to the employee, giving them real world skills as well as a headstart on the next chapter in their lives. Some even claim that CAAIR helps their prisoner/workers achieve early parole.

What CAAIR doesn’t say is that chicken processing plants are notoriously dangerous places to work, even if a worker does get paid. The hours are long and the conditions are well beyond brutal. In fact, an investigation by Reveal from The Center for Investigative Reporting found conditions that could – and probably should – be prosecuted for cruel and unusual punishment.

Men in the CAAIR program said their hands became gnarled after days spent hanging thousands of chickens from metal shackles,” wrote Amy Julia Harris and Shoshana Walter. “One man said he was burned with acid while hosing down a trailer. Others were maimed by machines or contracted serious bacterial infections.

Those who were hurt and could no longer work often were kicked out of CAAIR and sent to prison, court records show. Most men worked through the pain, fearing the same fate.

“They work you to death. They work you every single day,” said Nate Turner, who graduated from CAAIR in 2015. “It’s a work camp. They know people are desperate to get out of jail, and they’ll do whatever they can do to stay out of prison.”

”Friend of the Court”

In a Friend of the Court brief CAAIR’s lawyers came up with some very lawyerly reasoning for the unpaid aspect of the enterprise:

“Plaintiffs participated in DARP for their own benefit and to achieve their own rehabilitation, not for the benefit of DARP” (Drug Abuse Reporting Program) or any for-profit firm, the brief states. The lawyers said unpaid laborers receive a benefit beyond money: “a sense of self-worth and accomplishment.”

For Their Own Good

So there! People work 12 hour shifts under grueling conditions simply so they can experience a sense of self-worth and accomplishment. The lawyers didn’t say how many days or weeks or months or years the worthiness seeker has to work in order to fully get a sense of all that accomplishment, nor what they’re to do once that sense is fulfilled, but we’ve got a sneaky suspicion that it times out right around the end of what would’ve been the workers’ jail sentence. Isn’t it amazing how that works out?

Then again, CAAIR was founded explicitly to provide cheap labor for the chicken processing industry. Now that the courts keep the slaughterhouses staffed, the industry gets to reap the rewards. And while Herschel Walker is among the reward reapers, his gains aren’t quite as large as he;d like you to believe. Neither are a lot of other things in Walker’s exaggerated life.

Walker long insisted that he had graduated from University of Georgia “in the top 1% of his class”. Unfortunately, both facts are wrong. He did not graduate. From Georgia or anywhere else. And he most certainly didn’t do so in the “top 1%” of any class. Yet it wasn’t until the Atlanta Journal-Constitution raised the issue with the exaggerator that the claim removed from his website. Why Walker didn’t simply say he left college to play pro football is a mystery. After all, being drafted by the NFL would seem to be a pretty heady accomplishment on its own.

Apparently even the NFL isn’t heady enough for Walker; he’d rather build up his claims till they actually burst. Take for example his claims about the size and scope of Renaissance. Walker has repeatedly claimed that his company employed hundreds of workers. In fact, at one point he boasted a 600-person strong payroll. Walker also claimed his company brought in $80 million in annual revenue. But when Renaissance applied for Covid-related assistance under the Paycheck Protection Program in 2020 his company reported only eight employees and $1.5 million in annual revenue. That’s a rather large discrepancy by any estimation.

The Journal Constitution suggested that Walker may have just inadvertently conflated the number of the chicken processing plant employees with those of his own. If that’s the case, he’s even more supportive of the convict labor program than we’re led to believe.

Then again, discrepancy seems to be the only consistency in Walker’s playbook. In addition to the false claims about college degrees and exorbitant business achievements, Walker also saw fit to criticize large companies that took advantage of PPP loans, even after he himself took part in the program. (Thanks 11Alive) In fact, he went so far as to suggest that some firms were “giving back” the money because they were “ashamed”.

Since his company Renaissance was technically only large in Walker’s own mind, we suppose his company’s PPP loans don’t count. (He certainly didn’t give any money back.) But Walker forgot to mention that he’s a board member of the Sotherly Hotel Group, who received over $9 million in PPP loans and then went on to fire 90% of its hotel staff. Oh, don’t worry. Walker didn’t suffer one bit. In fact, Sotherly rewarded him $247,227 for five years of loyal service. And yes, Walker kept getting paid right through the pandemic, while most of the staff were being fired.

So, bailout money for Walker is good. Others however should be ashamed of themselves. Bragging is okay for Walker too, even if the facts are inflated. Heck, it really doesn’t matter if what you say is just plain wrong. When you get caught, simply change the subject. And don’t let anybody tell you that convict labor is wrong. Herschel Walker’s company is giving drug-addicted felons a so-called second chance. It’s also giving them an opportunity to fully support Hershel Walker. What’s a little cramp or some missed sleep or no wages compared to all that?

Healing Properties is all for diversion sentencing of non-violent drug offenders, so long as it includes bona fide addiction treatment. We’re also for job opportunities, so long as the workers get paid. Forcing a captive to work 50 or 60 hours a week under the harshest of conditions without either compensation or real treatment borders on cruel and unusual punishment.

Actually, such sentencing does more than border on cruel and unusual – it pretty much defines the practice. The phrase is of course tied to the Eighth Amendment of the United States Constitution, yet it threads through The (Geneva) Bible (Daniel 3:19), the English Bill of Rights (1689) and the Universal Declaration of Human Rights (adopted by the United Nations in 1948), as well as at least a half dozen other national and international mandates. In other words, it means something. Even in an Oklahoma slaughterhouse.

Here’s how Wiki so acutely spells it all out:

a phrase in common law describing punishment that is considered unacceptable due to the suffering, pain, or humiliation it inflicts on the person subjected to the sanction. The precise definition varies by jurisdiction, but typically includes punishments that are arbitrary, unnecessary, [and] overly severe compared to the crime, or not generally accepted in society.

So yes, “cruel and unusual punishment” is much more than a mere phrase. And its application here is by no means a stretch. Being forced to work in deplorable conditions with the threat of a jail cell hanging over your head may not rank on the scale of, say, Abu Ghraib, but it is cruel. It’s also seems to be a very unusual way to help someone achieve sobriety and return to the world at large.

So Herschel Walker, what are you going to do about it? You’ve spoke time and time again about your “obligation” to give back to the community. Wouldn’t working to install a fair and balanced diversionary program for non-violent offenders be a great way to do just that? After all, these business relationships are predicated upon your good name – wouldn’t it be wise to ensure the businesses’ practices were up to the task? Your company Renaissance has made a lot of money using convict employees, perhaps not as much as you’ve claimed, but still a considerable amount. It would be terrific to see you show that those people actually mean something more than money to you.

Healing Properties is an abstinence-based sober home located in Delray Beach, Florida. We’ve been helping men achieve sobriety since 2002. If you’d like us to help you or someone you know, please give us a ring.