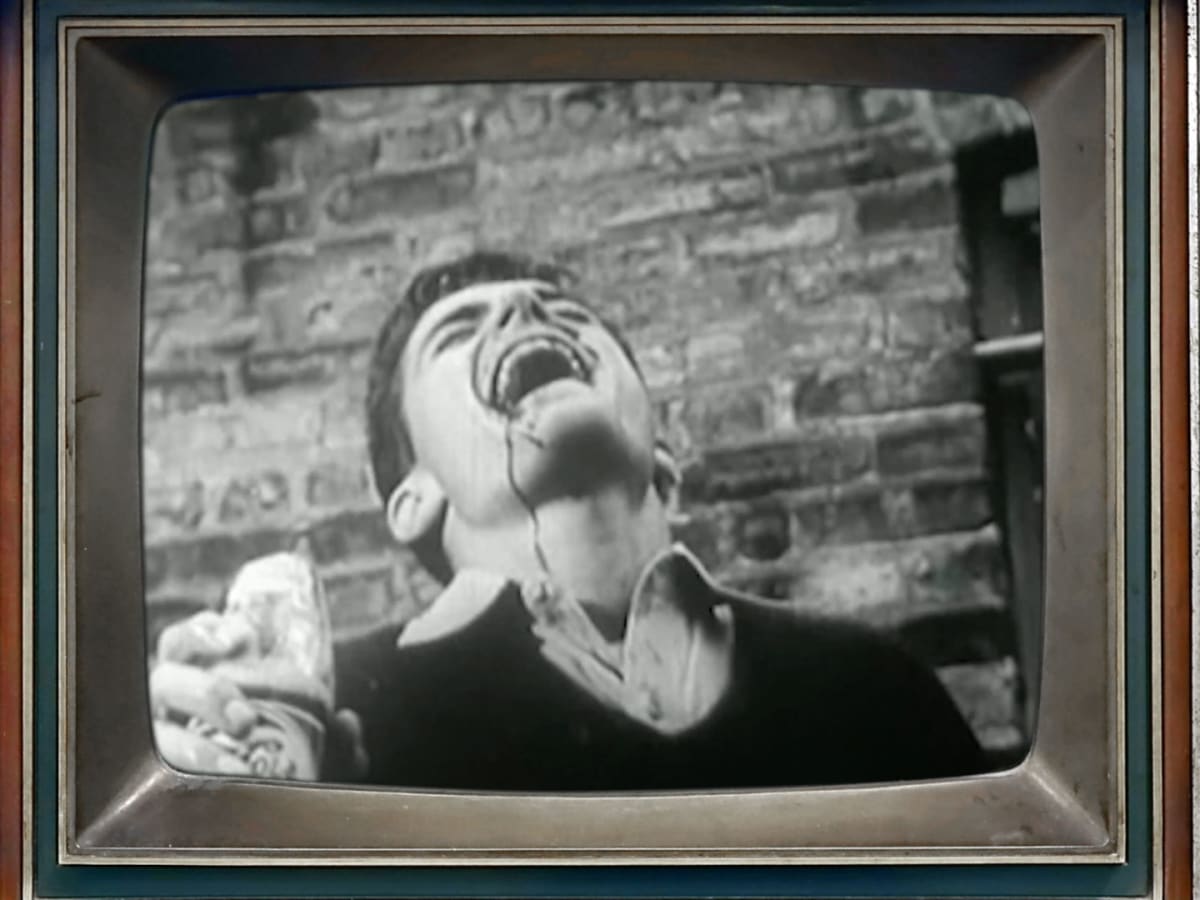 Drug Addiction: This Is Your Encyclopedia on Drugs

Once upon a time, in a very different America, the Encyclopedia Britannica got on the anti-drug bandwagon and produced a fearful little flick called “Drug Addiction.” The 1951 film, which is actually more matter-of-fact than Fear Factor, is admittedly difficult to take seriously, especially after all these years. But while the setting and the lingo are indeed quaint, its subject remains unequivocally serious. So does its message. Then again, drug addiction is still serious business no matter what the timeline.

Nevertheless it’s quite likely that folks won’t apply more than a cursory eye to this offering. That’s okay. It’s really not much more than a curiosity anyway. If however they were to look a little closer, and take its task with a tad more gravity, they’d see some very sad parallels between then and now. Namely, that America is still getting sickened by the same dire disease, even seven decades later, and we still lack a full-proof remedy.

In other words, drug addiction is the same as it ever was – only much, much worse.

Encyclopedia Britannica is probably not the first outfit you’d turn to for an anti-drug PSA. Then again, they are information providers. Heck, back in the day they were among the most informative we had. It’s quite likely they fielded an industrial film component to make use of all that information too. After all, TV was brand new and in need of content. Cinemas used a lot of between-show and preview product as well. Throw schools into the mix and you’ve got a ripe market for cinematic infotainment.

And “Drug Addiction” is nothing if not cinematic infotainment. Think Scared Straight without the scary parts. First run Dragnet in all its “just the facts, m’am” glory. Or the single most depressing episode of Leave it to Beaver ever brought to screen. All wrapped in Encyclopedia Britannica’s revered binding.

Marty is the star of our show…

“Marty was determined to be one of the gang even if it killed him,” runs the narrator.

And, naturally, it almost does kill him – just not in the way you’d think.

See, for some inexplicable reason “smoking reefers” compels Marty to break the tops off glass soda bottles and then drink from their jagged edges. That’s apparently to show how those diabolical reefers took away his common sense. Well, it works. Marty has obviously lost all common sense. The kid has also apparently lost all feeling, because he keeps drinking from the broken bottle even after it severely cuts the inside of his mouth. And just that quick we’ve got a bloody-mouthed pot-head with a no good high.

Before Marty has time to regret the ugly episode though, a fella named Duke is there with an even more potent distraction.

“Will it make me sick like the reefers?,” Marty asks.

“How much is it gonna cost me?”

“This one won’t cost you nothing.”

We don’t need Nostradamus to know where this is going.

Duke’s also got a habit – natch. Speed balls. He’s got a higher up too. Louie. Louie’s as loyal to Duke as Duke is to Marty. He’s certainly not averse to using him though. So when Louie realizes Marty is using his nose instead of the needle, he makes sure Duke helps the new recruit see the error of his ways.

Mainlining ups the ante – big time. And it isn’t long before Marty’s habit exceeds his salary. He starts stealing from his workplace. Pilfering and pocketing everything he can get his hands on. That, too, goes about as well as you’d expect. Unfortunately, his now ex-boss didn’t prosecute. And since Marty’s friends merely wrote him off, nobody really knows the trouble he’s in. Even his family can’t figure out what’s what.

Marty next takes Duke’s place. Theoretically he’s now one rung up from low man. In reality, he’s still right at the bottom. Sure the kid gets to supplement his petty thievery with luring in new recruits. But we know how far Louie lets that get him. Being a thieving middle man does make Marty popular down at the courthouse though. So popular, in fact, that they offer to keep him around for a year. Unless…

If you knew then what you know now, you probably wouldn’t have touched that first marijuana cigarette.

So says the square-jawed judge as he takes Marty to task. Okay, so the cliche sounds a little corny. But the truth it belies isn’t corny at all. Got doubts? Poll your local rehab. You’ll find there are very few junkies who’d head down Dope Road if they truly knew how much they were eventually going to suffer.

Judge defers Marty’s year-long jail sentence if he goes to rehab, which in this case means some kind of federal hospital. “You mean to try and kick the habit?” Yes, Marty. To kick the habit.

Even back in ’51 though folks knew that rehab alone wouldn’t do the trick. That there needed to be a long-term, community-wide program following the rehab if the addict is going to fully recover. The film calls for a heaping helping of hosts – outpatient clinics, social agencies, the church. We’re not sure how many responded seven decades ago, but it’s doubtful the supply of help was sufficient enough to meet the demand. It most definitely isn’t enough now.

The Danger of Drug Addiction

That’s another chapter though. This flick is really more about keeping kids away from drugs in the first place. And while much of the content does seem rather quaint and clueless, the dire language is unequivocal.

Basic to everything else is a wider knowledge, especially among young people, of the grave danger involved in any kind of experimentation with drugs. They should understand that the thoughtless curiosity about what it feels like to smoke marijuana or to take a shot of heroin can lead to a lifetime of pain and torment constantly faced by the horror of being without drugs.

While we can’t condone reporting the addict and the peddler to the authorities, we will concur that the peddler at least is “a deadly menace to himself and to his friends.” We’ll also concur that anyone “can be an addict,” and that “only by avoiding drugs completely can anyone be sure to remain forever safe from a vicious habit that enslaves not only one body but the soul as well.”

Listen, Healing Properties has been at this for 20 solid years. We know a 70-year-old PSA from Encyclopedia Britannica has about as much chance of changing culture now as it did way back when. We also know that more artful fare such as Trainspotting, Basketball Diaries and Requiem for a Dream didn’t kill drugs dead either. This much is true though, when “his whole body revolted in dreadful protest, nothing could stop the attacks but more of the white drug in his veins.” Now which movie do you think those words come from?

No, the big idea is to first bring attention to the problem and then, hopefully, address it. If that takes some kitschy-cool old movie or Leo DiCaprio, so be it. Just so long as it takes. And if you’re ready to take off the shackles and fly then by all means give us a ring. We’d be delighted to help sort you out. You don’t even have to be in Delray Beach. We’ll help regardless. You’ve simply gotta get in touch.