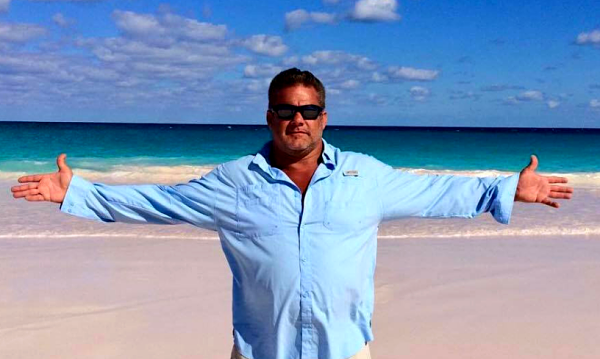 For Ex-Buc Randy Grimes, His Fiercest Opponent Was OFF the Field

There are two constants in every NFL player’s life — the Super Bowl and pain. The first, of course, is every pro’s dream. And they generally spend their entire careers chasing that dream. The latter is simply their given day-to-day. Something that’s part and parcel to their jobs. The luckiest players make it to the Big Game and manage to keep pain to a minimum. Most pros though are lucky just to stay on the field. That’s what Randy Grimes figured anyway. But as the years piled on and the hurt kept getting worse, he didn’t always feel so lucky.

In fact, a lot of times Grimes felt pretty rotten. Physically at least. No surprise considering his occupation. The abuse his body underwent was immense. Then again, he underwent it beneath a pile of giants with each and every play. It didn’t matter that Grimes stood 6’4″ and weighed 270 lbs — everyone else on the line did too. Or more. So his size did little to counter anything. And even when Grimes could avoid being buried beneath an avalanche, he still got pushed and shoved and smacked around by his fellow giants. It all added up to some very serious hurting.

So what’s a pro player to do?

Well, Grimes figured he had two choices: retire or deal with it. The former wasn’t much of an option — he’d spent his entire life striving to get on to the NFL stage; he couldn’t even imagine walking away. Besides, retiring smelled too much like surrender. On the other hand, he could just pop a pill and put out the pain. It’s worked before. Heck, the team even kept a safe full of meds right in the middle of the locker room for just such purposes!

Do you have to ask which option Randy Grimes selected?

The Times‘ Take on Randy Grimes

Randy Grimes spent a decade playing Center for the Tampa Bay Buccaneers. He was popping pills for nine of those 10 years. That’s right. Grimes started medicating during his second year. Vicodin and Halcion to be precise. The Vikes enabled him to “get through full-contact practices.” The Halcion helped him grab some much-needed shut-eye each night.

Oddly enough, Grimes “never took painkillers in college.” In fact, he never took them “at any time before he entered the league. Yet he regularly used the pills to continue playing” in the pros. Even in retirement, Grimes’ pill-popping habits persisted. And it sent him on a “haunting, shattering journey into opioid addiction.” An addiction “it has taken years of struggle, money and anguish in order to heal.”

That’s what New York Times reporter Ken Belson wrote in his 2019 look into NFL retirees and opioids. The piece, entitled For N.F.L. Retirees, Opioids Bring More Pain, investigated the NFL’s long-running practice of over-medicating its players. And for proof, its writer peeled back the lives of Grimes and a few of his once fellow warriors.

It was not a pretty sight.

Performing on “the biggest stage in American sports,” has its price, of course. And pain is a large part of that price. In fact, writes Belson, “putting up with pain — a lot of it — has for decades been central to the bargain of playing for glory and money in the NFL.” Consequently, “countless players have long ingested far more pills than they should.” As players grew larger and pain meds got stronger, the addictions increased exponentially.

Those increasingly larger needs didn’t end once the player hung up his cleats either. Belson cites a Clinical Journal of Sport Medicine study which “found that 26.2 percent of retired players said they’d used prescription opioids within the past 30 days.” Furthermore — you guessed it — “nearly half of those players said they didn’t use them as prescribed.”

Another study — this from Washington University — found retired NFL players addiction rate was three times the national average. Makes sense considering the study also found that 79% of active players misused drugs during the course of their careers. Besides, pain generally doesn’t go away. So if a player is going to pop pills in order to play, he’ll almost certainly have to do likewise in order to handle his post-playing day-to-day. Throw subsequent surgeries into the mix and you’ve got the recipe for continuing addiction.

How We Have to Do

If popping pills to stay in the game was the NFL norm (which it was), and that led to popping pills just to handle the day-to-day (which it did), things will likely get dicey once you lose league access to meds, let alone the league’s fat paycheck. Consequently retired NFL players quickly find themselves in quagmires of unprecedented proportion.

Like many players, his departure was abrupt, involuntary and wrenching. Although he no longer abused his body every week in practices and games, he could no longer rely on team doctors to help him cope with the lingering injuries he had to his neck, back, shoulders, knees and ankles that made getting out of bed in the morning a 30-minute ordeal.

So he coped on his own. He found new doctors, visited pain clinics and bought painkillers on the street. [He even even bought pills] from residents at retirement homes.

This time the “him” at hand isn’t Grimes; it’s Aaron Gibson, who played for the Detroit Lions, Dallas Cowboys, Chicago Bears and Buffalo Bills before injuries finally got him bounced down to the Arena Football League. And though Gibson was the largest warrior on the field (at 410 lbs, he still holds the record for heaviest NFL player ever), he wasn’t large enough to beat addiction. If anything, his size only exacerbated his condition.

Unfortunately, Gibson’s story isn’t at all unique either. Belson:

Addiction is expensive. Most pills are not covered by insurance. So like other addicts, retired NFL players with addiction problems reach into their pockets. Spare cash disappears. Possessions are pawned. Homes are sold. Players are abandoned by their families, leaving men like Grimes sleeping alone on the floor in an empty house, with the utilities turned off, consumed by the pain of withdrawal.

Indeed, not even a full decade of steady and healthy paychecks was enough to keep Grimes safe once he left the NFL’s “cocoon.”

There is though some light at the end of the proverbial tunnel. Grimes has seen it. So have many other retired ballers. Some of that light springs from The Player Care Foundation, which is run by the league. Other rays are cast by the Player Assistance Trust Fund, which was put together by the National Football League Players Association (NFLPA). Then there’s Gridiron Greats, a nonprofit group started by former coaching legend Mike Ditka which helps retired players deal with medical and financial problems.

Still others are receiving help from Pro Athletes in Recovery, which Grimes started with his wife Lydia back in 2013. Like the League’s Foundation, the player’s union’s Trust Fund, and Coach Ditka’s Greats, Pro AIR is committed to helping former football players end the relentless cycle of addiction. Unlike the other NFL-associated organizations though, the Grimes’ group also lends substance abuse assistance outside the NFL realm. In fact, it apparently “offers prevention and intervention programs to schools, colleges, law enforcement, treatment centers, and communities” at large. In other words, anyone who needs a helping hand.

Pro AIR seems to be an extension of Grimes’ own personal journey. A journey that has found him pairing 10 years of pro playing time with 20 years of addiction and coming up with a powerhouse recovery program that includes motivational speaking (Tour de Force Speakers), in-house addiction treatment counseling (White Sands Treatment Center) and all-around substance abuse help (the aforementioned Pro AIR). Grimes has now even racked his own book — Off Center — which serves as a perfect inspirational segue in his increasingly inspiring life.

It’s a long way from bouncing from bottom to bottom looking for pills. A helluva long way.

How We Now Do

How’d he do it? Well, like everyone in recovery, it took a confluence of events. In Grimes’ case, the catalyst was losing a dear friend. That’s what finally gave him the courage to stand up and fight, he says. And to not back down until he’d vanquished his foe. Grimes also had help of course (also like everyone else), from his wife Lydia (who was his high school sweetheart) to a bevy of friends, family and acquaintances. Mostly though, he had the capacity to put one foot in front of another until the steps started adding up. He eventually made it many, many miles.

Grimes is still making it too. You can hear him out there telling his tale all around Super Bowl LVI, whether it’s on TV, radio, podcast or stadium corner. You can also find him making the rounds in Southwest Florida, whenever there’s someone in need of a hand. Because at the end of the day, Grimes knows none of us really gets anywhere wholly alone. If you’re gonna have someone by your side though, you’d be blessed for it to be a warrior like Randy Grimes.

What about you? Are you ready to turn the corner? Sure, it can be a little scary. After all, you’ll be walking into a whole new you. But there’s really nothing to fear. Nothing whatsoever. All kinds of people have made the move — from ballerinas to ballers — and each and every one of them are looking nowhere but ahead. In fact, they’re traveling full speed ahead too. Because they’ve freed themselves from the anchor of addiction. If you’d like to free yourself too, please give us a ring. Remember, Healing Properties has been at it for two full decades. And if we can’t help you here, we’ll help get you to a place that can help. No foolin.’