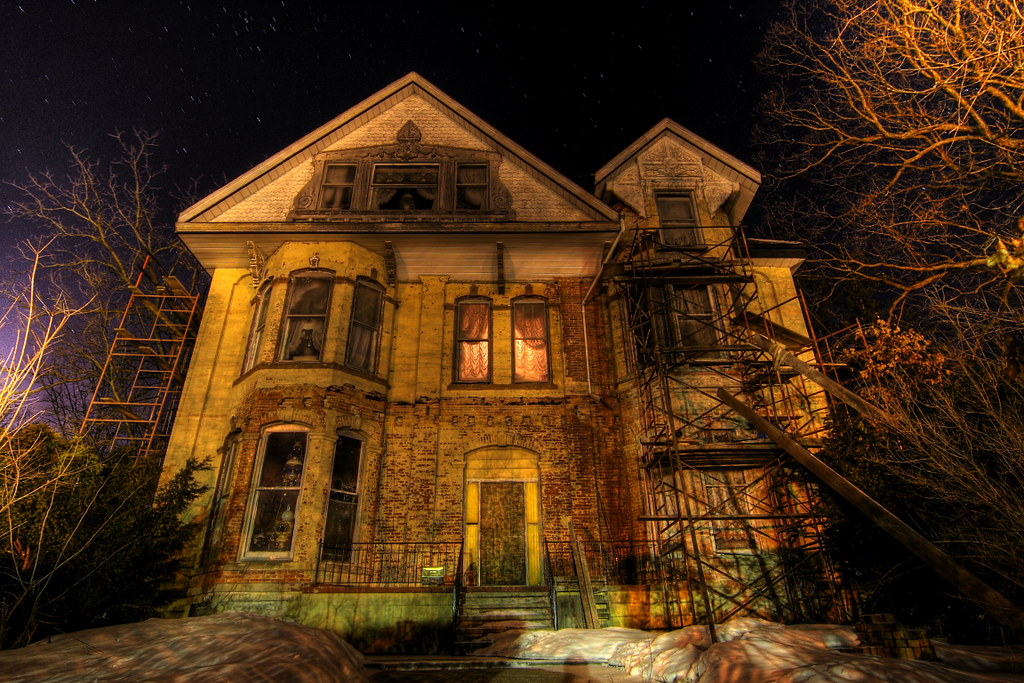 The Making of a Haunted Alcoholic

It’s no secret that heavy drinkers sometimes see crazy things when they’re either drunk or detoxing. But this haunted alcoholic didn’t see real crazy till she got clean. Then the crazy came straight outta the woodwork.

It came outta the woodwork of a charming old Victorian home anyway. It also came in through the windows and up from the basement. But the crazy really made itself known in the deep dark of the night, when it twisted her dreams into visions that were much more monstrous than anything ever created by drunkenness or DTs.

Here’s how it all began…

Dana had just got out of rehab and was ready to restart her life. A pal had recently inherited an old home that needed some serious cleaning up before it could be put on the market. The friend offered to rent the place for half-price in exchange for Dana getting the property into presentable condition. Dana figured fixing up the house would give her a new sense of purpose, and that in turn would help secure her sobriety. It took all of a millisecond for her to jump at the opportunity.

The thing is, “the house was more than a mess – it was a disaster.” The place had been lived in hard, for a long time. Then it had been left to decay for an equally long, hard time.

Something Harder to Clean

Beyond the dust and the dirt and the cobwebs though was something even harder to clean – ghosts. That’s right, all that crazy coming out of the woodwork and in through the windows and up from the basement was actually a batch of human apparitions. Worse, those apparitions were active. Violently active. And they turned Dana’s nights into paranormal nightmares.

When she shares a little of her experiences at an AA meeting everyone nods their heads knowingly. One alcoholic even approaches Dana after the meeting; says she’s been there and seen that. Dana knows there’s no way this woman has been where she’s been or seen what she’s seen, but she welcomes the kindness.

Then Dana’s daughter shows up for a visit. It’s clear there have been some issues between mother and daughter, especially with regards to Mom’s drinking, but they’re happy to see each other. And the two talk and talk and talk until well into the evening.

Then one of Dana’s frequent visitors pops by in the middle of the night. He proceeds to make it appear as if Dana is back on the sauce – big time. Daughter is gone before Mom can wake and explain away things.

At the End of Her Tether

Dana needs to talk to someone. Anyone. She calls the woman from the AA meeting; asks her to come over. When the woman learns where to go there’s a significant silence. She knows that address. We don’t know whether or not it scares her, but it certainly gives the woman pause. Nevertheless she agrees to pop over.

That’s when Dana learns the history of the charming old home. It was once a speakeasy/brothel run by an Irish gangster named Paddy something or another. As you might suspect, a lot of unpleasant things happened in the old speak, not least of which was the murder of Paddy’s #1 girl. Paddy apparently also met his end by someone else’s hand.

Hence the ghosts. And hence the making of a haunted alcoholic. The story doesn’t tell us if Dana took the time to pack her belongings before she left, but we do get the impression her departure happened long before asap.

Flash forward three years. Dana is still sober. She’s also patched things up with her husband and reunited with her daughter, who’s about to enter college. Dana doesn’t know who bought the haunted old house after she left, but she still drives by every once in awhile. Maybe she’ll knock on the door one day. Then again, maybe she won’t.

Do you think she’ll eventually want to know more about the house that made her a haunted alcoholic? Would you?

Not to be confused with History Channel’s The UnXplained, which springs from the folks who brought the world such popular attractions as Ancient Aliens and The Curse of Oak Island, The UnXplained Zone is one of a cavalcade of offerings A+E Networks assembled for a new paranormally-inclined YouTube channel. Not that it really much matters of course. A+E Networks, which is owned by Hearst and Disney, itself owns the History Channel. And History is itself just one of many sister channels that includes Lifetime, Crime & Investigation and Military History. Heck, A+E Ventures even owns pieces of Vice (20%) and Atlas Obscura!

Miami-based 2C Creative put together a tease to “your portal to the paranormal” that highlights offerings such as Ghost Hunters, Unidentified: Inside America’s UFO Investigation, Criss Angel Mindfreak and Celebrity Ghost Stories, in addition to The UnXplained Zone.

In the 2C clip (seen on Promax) we hear Ice T insist that he isn’t afraid of no f-ing ghosts, and that may well be so. (We haven’t seen the episode.) If it is though, he’s just one of many, many folks who claim not to fear such things. The fear-nots may even be among the majority.

In fact, they are. Anna P. Kambhampaty’s 2021 New York Times piece rounded up a few studies focusing on whether or not people believed in ghosts and if so, whether or not they feared them. Both IPSOS and Gallup found that a large section of people believed in ghosts (49% and 32% respectively). The Paris-based IPSOS (the Institut Public de Sondage d’Opinion Secteur) polls internationally, so their results may have a more global skew. The DC-based Gallup, while operating internationally, has been known for its on-target U.S. polling since 1935.

A third survey, from Chapman University, found that about 9% of folks also feared ghosts, which of course goes beyond mere believing. That investigation, which was called the Survey of American Fears, went beyond mere believing as well. And of the 1,035 adults surveyed, it found that the same amount said they also feared zombies. It also found that many more people said they were afraid of government corruption, the coronavirus or widespread civil unrest.

Getting back to ghosts we find a keen little pre-Halloween quickie from NPR. There, the public-minded organization cited a YouGov survey that found 2 in 5 Americans believe ghosts exist. One in five of those Americans thinks they’ve actually seen a ghost. Better yet, the announcer said he was “absolutely one of them.” So convinced are folks about ghosts’ existence that they believe the name of those human-ghost encounters should be changed to “kind-of-normal activity” rather than paranormal activity.

What do you think?

We know what we think here at Healing Properties – that if you believe it, then it is real. Or it will be real, so long as you keep believing. That goes from ghosts to sobriety. Yes, we’ve treated many a haunted alcoholic. Some of those were haunted by actual ghosts. Others were haunted by their own pasts. Then there were some who were haunted by a mix of both and more. Whatever the case though, the alcoholic couldn’t effectively address the haunting until they got completely sober. Indeed, sobriety was the only was to gain true perspective. Once they did achieve sobriety though, that perspective became invaluable.

And effective. Perspective permits a person to place things where they belong. Most surprisingly, it allows one to eliminate things without missing a beat. We’re talking about things that had been held on to as if life itself counted upon them – gone. We won’t get into the what. That varies by person. We will get into the what happened though. And what happened is that the haunted alcoholic lost their fears. Simple as that. And if any kind of apparition did decide to stick around, it did so at the host’s discretion.

Even guardian angels can be a nuisance if not handled with perspective. And like we said, there’s no true perspective without sobriety. So whaddya say? You wanna put some perspective between you and what’s haunting you? If so, then please give us a ring. We’d be honored to help get you sorted.